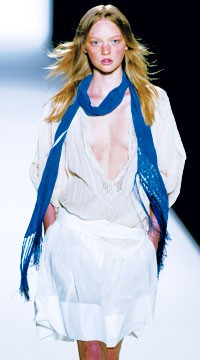 Chloé: Phoebe Philo left her audience wholeheartedly impressed on Saturday, dousing any doubts about her formidable talent. While there may have been an occasional clunker in her first few shows at Chloé, season by season, those occurrences have become more rare. Philo is ever more articulately describing the way her generation wants to dress — whether it’s Parisian “It” girl Lou Doillon or Hollywood’s Kirsten Dunst — with a signature look that is sexiness au naturel.

For spring, that meant lots of cottony flou, in the form of eyelet skirts and angelic dresses that fell loose on the body, as well as organic takes on men’s wear. When Philo designs a tuxedo shirt, it’s a delicate affair done in gauze with neat, flattened ruffles. When she does seersucker, as in a slim seersucker suit or a trim blazer, it doesn’t look dorky, but completely cool — the kind of cool exuded by a girl who never seems to try.

There’s an effortlessness to all of Philo’s clothes, a gentle tailoring and casual attitude that come across as anything but forced. Take, for example, drop-dead fabulous after-dark looks like a loose sky-blue dress bordered in indigo or a rose silk halter with jeweled straps worn with a wisp of a cream skirt. These are the clothes to love, to cherish and to wear and wear and wear until they can be worn no more. This collection brought Philo’s Chloé girl into sharp focus — and she’s a real knockout.

Christian Lacroix: Christian Lacroix christened his spring collection “Ebloui,” promising it would appear “as if blinded by the light.” Setting the mood, assorted chandeliers hung in the entrance to the Ecole des Beaux Arts, while numerous huge white lanterns illuminated the show space inside. The models emerged from a whitewashed backdrop indicative of a sun-drenched shipwreck, and meandered about between the seats arranged in curved configurations.

The clothes did indeed dazzle with their lightness of spirit and because of Lacroix’s ever-lightening touch. In recent seasons, he has set out to deliver his unique sense of romantic frivolity while making his ready-to-wear just that — more approachable and pertinent for times other than the grand event. That said, who better to revel in the feminine mood du jour, while showing the trendies a thing or two about the glories of decoration? Throughout, Lacroix offered plenty: a black bow tied in the back of a dreamy lace-and-chiffon dress, otherwise beribboned in pink; a mélange of laces and patterned silks for a patchwork coat; playful yarn embroidery and colored stones for a simple micro-shift.

Lacroix opened with gently frilled whites, keeping proportions full and short. And while he loves a dress or a corset and skirt, in this major jacket moment, he more than did his part with small, shapely pastel tweeds and well-worn denim over peasant skirts or short shorts, and a slouchier shape done up with playful “Guatemala” embroidery worn over full-cut pants.

For all the decoration, much of the happiness of this collection — and it doesn’t get much happier than that coat printed in giddy, oversized pink toile de Jouy — lay in its casual attitude. In fact, even the most elaborate of Lacroix’s evening gowns looked as if it could do double time at a beach party. Of course, it could also dazzle on the red carpet, and that’s something to smile about.

Hermès: While his signature collection delivered a rollicking dissertation on gypsy skirts and kicky Parisian chic, Jean Paul Gaultier took a much quieter approach at Hermès this season. His second collection didn’t explore the house’s foundations as conceptually as his first, a horsey ode splashed with the company logo. It did, however, surprise many in the audience by revisiting the philosophy of his predecessor, Martin Margiela. Margiela offered the Hermès customer no-brainer luxury in the form of clothes so discreetly designed that his signature rarely became apparent. While Gaultier’s spring look was certainly more fun than any of the dour clothes previously seen on the Hermès runway, he resisted the rebel fare he’s known for at his own house.

And that formula seems to work for the house. Gaultier’s look was pretty, if peaceful, and his fine-tuned French-styled comfort clothes are the sort tony Hermès customers are sure to appreciate. The show opened with a sprightly denim moment — cropped jeans and fresh toile de Jouy chiffon blouses. Even more laid back were simple wrap sweaters and oversized cardigans shown with long fluid skirts or drawstring pants. There were wardrobe builders: a leather trenchcoat, a safari jacket and chiffon blouses. And for evening Gaultier maintained a breezy slip-it-on-and-go spirit with fluid jersey gowns, one cleverly wrapped with pretty scarves.

Throughout the show, the clothes spoke of a woman both pulled together and relaxed. This was a solid, well-done Hermès collection with real-deal commercial appeal, even if it disguised the wonderfully zany nature of the man behind the curtain.

Nina Ricci: Lars Nilsson’s particular talent lies in creating featherweight dresses, and his spring Nina Ricci collection boasted plenty of those beauts. There was a dropped-waist dress with faded rose, white and blue stripes, and another as light as snow and traced in silver. Sometimes that airy attitude was translated into scarf-print skirts and paper-light jackets. But one imagines there have been some late nights spent in the atelier during the past few months, since Nilsson also attempted several silhouettes crafted in the grand old tradition: jackets with lantern sleeves and stiff belled skirts. Often these overly-constructed pieces looked awkward — especially in some of his hard-to-take color combos — although an overall sportswear spirit pulled them through.

Mixing and matching his proper party dresses with the rest, Nilsson sent out a more polished potpourri than he has shown in the last few seasons. He’s still settling in chez Nina Ricci, but this collection was a promising one, and shows that the designer has been doing his homework.