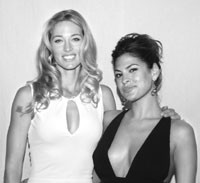 NEW YORK — Facing tougher competition than ever, drugstores are reaching into their beauty departments to hitch their fortunes to the trendy wellness movement.

Feeling steady pressure from discounters, dollar stores and convenience stores for sales, drugstore retailers are looking to more directly position themselves as a center for personal service and expertise on wellness as well as beauty.

That was the mantra at the National Association of Chain Drug Stores’ Annual Meeting, held here at the Phoenician Hotel last Friday through Wednesday.

“We must leverage our resources to cross-promote wellness products and develop new markets,” said Mary Sammons, president and chief executive officer of Rite Aid who is also the current chairman of NACDS. She believes health and beauty care products are part of overall wellness. “People are starting to connect looking good and feeling good.” And the drugstore industry, added Sammons, “must place a larger focus on helping people take care of their health.”

Merging the health care positioning of a drugstore with more treatment-oriented beauty products has long been a theory of Michel Coutu, president and ceo of Brooks Pharmacy — one of the most sought-after executives at the meeting with his firm’s pending acquisition of 1,539 Eckerd stores.

And an exuberant Coutu scoffed at the notion that the 330-store Brooks could have trouble digesting the purchase. “We are ready,” Coutu told WWD.

Over the next six months, he plans to study the dynamics of each Eckerd store to determine what approach is needed. In beauty, he hopes to examine the stores that once belonged to Genovese Drug Stores and find the secrets to bringing back those fiercely loyal consumers. He also hopes that many Eckerd stores will be a good fit for Brooks’ Derma Skincare Centers, which sell Avène and Vichy and will soon add two more upscale skin care lines, according to Coutu.

Tom Ryan, president and ceo of CVS — the purchaser of the remaining 1,260 Eckerd stores — has long been accustomed to being hunted down at the annual meeting. He, too, is buoyant over the Eckerd purchase. Those stores will quickly take on the look of a new CVS prototype called Project Life, according to Ryan. The format, which emphasizes health care and beauty, also will be incorporated into existing CVS store in the Las Vegas market. In Connecticut, select CVS stores have started selling Boots products from the U.K., including No. 7 cosmetics and the Botanics line, in an illuminated store-within-a-store format. These products also join upscale skin care lines. The stores have a consultant stationed at the front — the beauty equivalent of a pharmacist.

Such a service is what drugstore executives aim to install in their beauty departments — a place where consumers consult pharmacists and beauty advisors for advice about their health and well-being. Chain executives hope that consumers will turn first to the drugstore for products to improve their looks.

Chris Bodine, senior vice president, merchandising, for CVS, which will be adding beauty advisers to 600 stores this year, commented, “We think there is a logical extension between health and well-being and the beauty category.”

Retailers continue to react to the need for skin care. Duane Reade is expected to be the next retailer to try an upscale skin care department with the Vichy and Avène brands, starting with two stores in Manhattan this summer.

For drugstores, fusing beauty and wellness could be a prescription for survival. Discount and food stores sell much of the same cosmetics products as drugstores these days. What they don’t have is the health care heritage that pharmacy retailers now want to flaunt. When Brooks began adding the specialty skincare centers to its stores, it made a point of locating them near the pharmacy — for added authority.

U.S. retailers may have their work cut out for them however. Boots had previously attempted a merger of health, beauty and wellness with lackluster results. Its 12 Wellbeing Centers – that offered beauty products and treatment services such as massages and manicures – were shutdown last year.

Procter & Gamble was one manufacturer taking a holistic approach to beauty care. The company, which was ahead of the curve last year with the introduction of Olay Vitamins, extended its makeover room at the NACDS show to offer hairstyling as well as vitamin consultation this year.

“What we are seeing and will continue to see is the blending of health and beauty. A lot of external beauty comes from internal wellness,” said Marc Pritchard, president of global cosmetics and personal care for Procter & Gamble. P&G, he noted, has a business model that maximizes the connections between product categories. For example, P&G works with retailers to cross-merchandise Cover Girl and Crest Whitestrips. From a product perspective, skin-protecting ingredients in Olay Total Effects skin cream are used in AquaSmooth, a foundation. “We have the breadth of products that consumers think of as beauty from fundamentals such as bath care and deodorants to full transformational items such as hair color and cosmetics,” he said.

Harvey Alstodt, senior vice president, sales at Del Laboratories, noted that it will be extending its spa nail polish line, Beyond Perfect, into a full beauty assortment, including a collagen-based lipstick, due to the interest in health, wellness and benefit-driven products.

Realizing that it has healthy positioning to leverage in Almay, Revlon also will put more muscle behind that franchise this year, according to Paul Murphy, executive vice president of sales for Revlon, Almay’s parent. Almay will follow some of the strategic positioning employed to reinvigorate Revlon, including high impact advertising and innovative products.

To attract former department store consumers, Almay promotional materials now feature what the company calls “Almay green,” a color reminiscent of Clinique. Almay could use the help; its sales have weakened since its most robust period in the late Nineties.

Almay model Elaine Irwin Mellencamp was on hand, along with Revlon face Eva Mendez, to express the images behind the brands.

To sweeten things up, Revlon kicked off the meeting with its annual Friday night party with an acoustic performance by Sheryl Crow and chocolates molded in the form and shade of Revlon lipsticks, foundations, nail colors and eye shadows. The delicacies were “merchandised” on a wall fixture. “These are products we won’t get back as returns,” quipped Murphy at the soiree.

Neutrogena, a company often associated with healthy skin, has an arsenal of new items, according to Michael McNamara, its worldwide president. “We’re introducing a line called Advanced Solutions. People want a higher level of products,” he said, noting the skin care collection will be unveiled in October. “The products will offer a higher level of performance at mass,” he added.

While skin care has been full of innovation, color cosmetics, a longtime drugstore mainstay, has been rather dull, retailers said, with the exception of companies such as Physicians Formula. The company used innovative products such as baked eye shadows and the multi-colored Powder Palette to drive it to a top position in those segments. It also has the number one bronzer on the market. “And we’re not stopping the innovation,” said Ingrid Jackel, senior vice president, marketing, for Physicians Formula

Jackel is sensing a move on retailers’ parts to remerchandise beauty departments to take advantage of the synergies between categories such as sun care and cosmetics. “They are looking at adjacencies and not addressing aisles in the same, old fashion,” she said. Dovetailing that, Physicians Formula executives said they’d be branching more heavily into other categories beyond color in the next few years, and in the immediate future, will be putting more active ingredients into products to offer more healthful benefits.

A tussle is brewing at the other end of the price spectrum. During the time Markwins International took to digest last year’s acquisition of AM Cosmetics, Del Laboratories moved in with some accounts — most notably, CVS. CVS is testing NYC in some stores as its major budget option.

Bath and body brands continue to up the ante in beneficial ingredients. The White Rain Co. showcased its Te Tao bath line that has entered the new spa section at Target and has been doing well. There will be additional innovations to the line in October. “If we keep things new and fresh, the consumer does not wince at a $12 product,” noted Pete Columbia, senior vice president, sales and marketing at White Rain. “It is all about pampering themselves.”

Bill George, president of Markwins International, said AM Cosmetics is now totally meshed with Markwins and is starting to climb back up in dollar volume. “AM was troubled when we bought it and we have turned it around,” he said. In the next few months, he is confident industry data will show the upturn.

The number crunching could be deafening over the next few months as retailers make plans for next year’s planograms. “There will be changes. Some chains have been sitting on lines too long,” said George. He hopes retailers will award some of the precious footage to Markwins’ new Victoria Jackson line. Other brands hoping for a shot at consumers’ pocketbooks are Jane, now under the direction of Lisa Yarnell; Rimmel; Tru, and a handful of fledgling brands. Yarnell used the meeting as a time to reacquaint retailers with Jane’s positioning and a promise for the support it warrants.

The health of the meeting was debated at the tables dotting the pool at the lavish Phoenician Hotel. While some executives griped that they only had as few as 10 appointments, others were content with the caliber and quantity of business exchanges. The meeting attracted about 2,200 executives, according to Craig Fuller, NACDS president. “We traditionally lose some numbers when we leave The Breakers. [The meeting is held at The Breakers three years in a row, then moves to another locale.] This is the first time that didn’t happen. There is a genuine interest in people wanting to spend time together at this meeting and it is busier than ever,” Fuller said.

For next year, suppliers and retailers will head back to The Breakers — presumably much “healthier.”