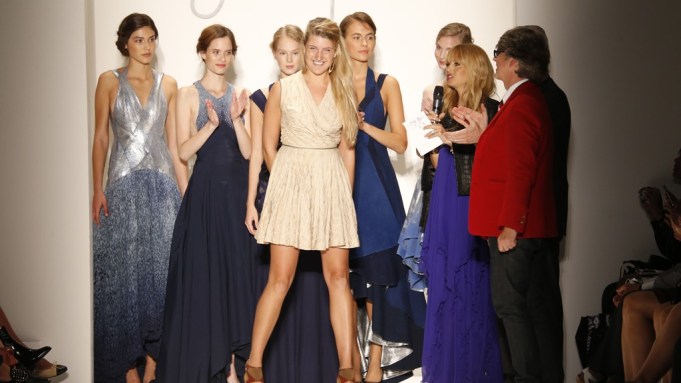 Competing with seven other finalists at the runway show staged at The Studio at Lincoln Center, Selin presented a capsule collection of eveningwear made exclusively with Supima cotton fabrics. Supima is the promotional organization of the American Pima cotton growers.

Selin’s mini collection — which was rendered in a mix of handmade matte knits and shiny metallics in a palette of blue, silver and pewter tones — won accolades from the judges, who included Douglas Hannant, Fern Mallis and Rachel Roy, for her innovative style. Her résumé is peppered with several design awards and scholarships, all resulting from her draping and experimenting with materials such as bulky machine knits.

Selin said her goal was to transform garments into wearable jewelry through sheen and reflective qualities.

“I wanted to work with metallics and thought it would be a challenge. I used silver and pewter foil, but I also wanted to add texture to the garment, so by shredding it into strips I gave it a certain texture. My inspiration was the ocean, a deep blue palette of the currents and waters twisting around,” said Selin.

Asked if she plans to start her own design business with the $10,000 check that was handed to her by the show’s host, celebrity stylist Rachel Zoe, she replied, “No.”

“I’m going to buy a working foot sewing machine — a sewing machine to work with leather — and create a lot of leather designs. But I would like to work for another designer for a while and learn the ropes of the business,” she noted.

Selin’s mentors for the competition were Meg DeCubellis and Donna Gustavsen.