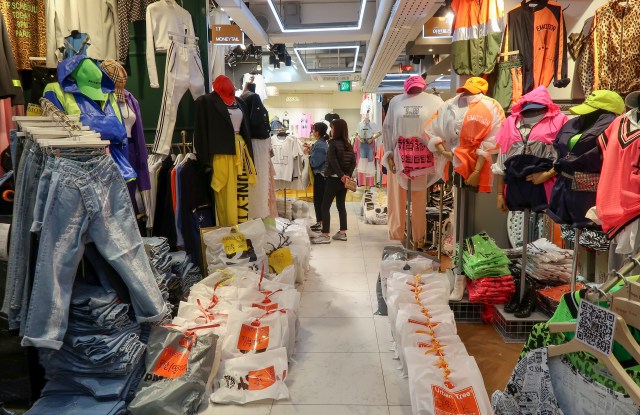 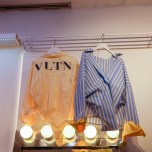 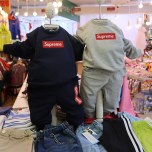 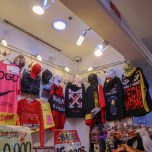 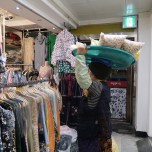 SEOUL, South Korea — It’s past midnight in the Kwanghee Fashion Mall located in the Dongdaemun wholesale district here, but for the dealers and buyers, the evening has just started: makeup is morning fresh, clothing steamed and unwrinkled. Malls here open at 10 p.m. and close at 5 in the morning; they are pressure cookers of nocturnal commerce — illuminated to feel like it’s midday, pumped with chilled air and vibrating with K-pop music, while coffee shops hum in the corner of each floor.

The country’s rise in soft power — known as Hallyu, or the Korean wave of influential pop music, entertainment, beauty and fashion — has helped make Dongdaemun the key global supplier of South Korean fashion. Boutique owners from around the world travel there — gorging on trendy clothes to sew their label into or stocking up on imitations of popular brands. Parcels hailing from Dongdaemun — labeled with their mall of origin like Migliore and ApM Place — have been spotted in local shops in Flushing, N.Y., in Harajuku, Tokyo and in various locations around Taipei, places where Korean-made fashion now carries an aura of high desirability.

South Korea boasts the world’s fastest Internet system, which some say has accelerated the rate at which fashion trends here cycle in and out. While the Dongdaemun district — established as a rag trade by North Korean refugees after the Korean War — is home to malls, it’s also the location for many fabric suppliers and manufacturers, making it possible for production speeds there to match South Korea’s rapid appetite for trendy goods. 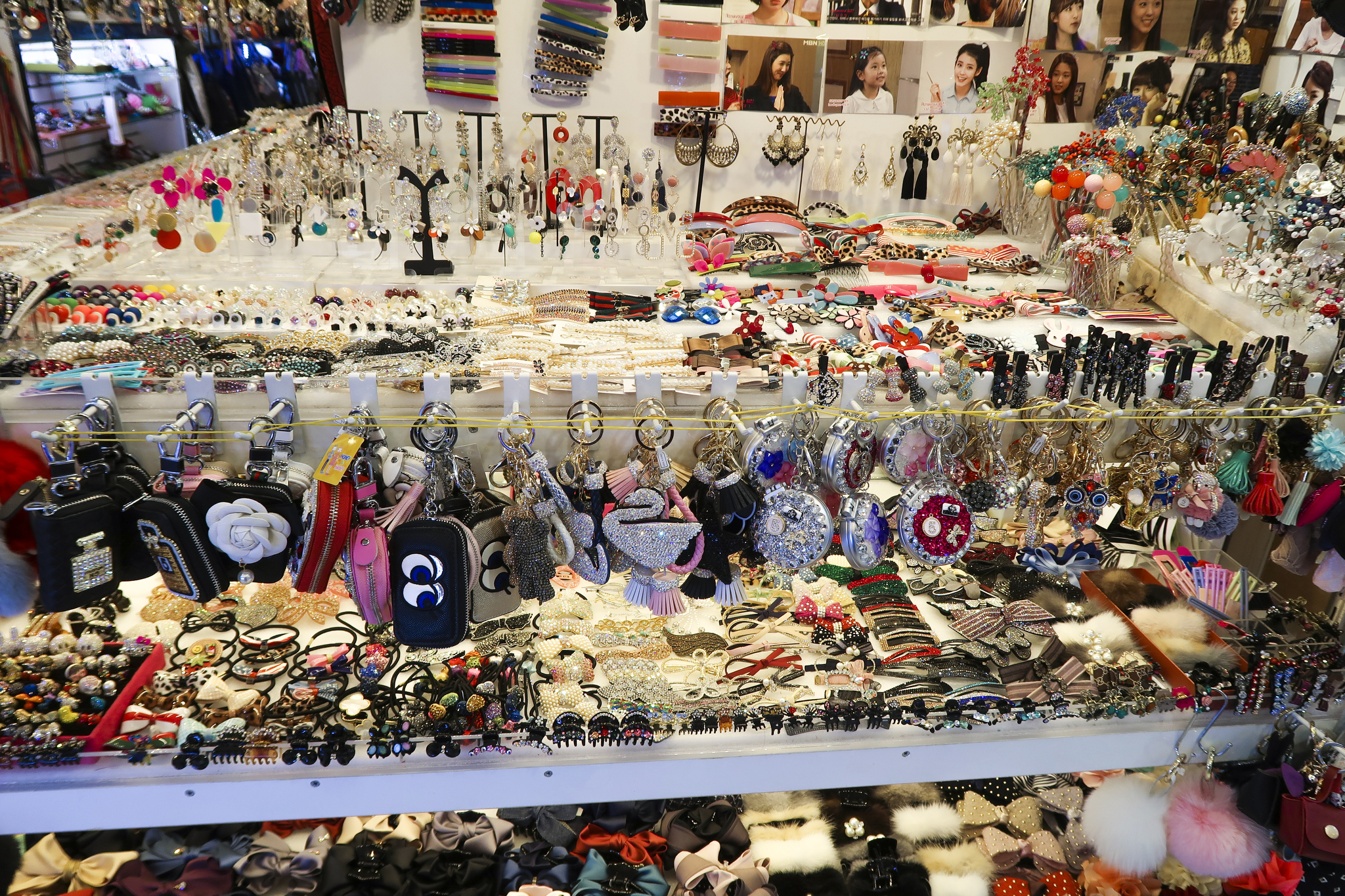 Rather than freestanding stores, Dongdaemun’s dealers operate out of thousands of stalls, which are overrun with imitations of Supreme, Valentino and Patagonia. Most stalls strictly operate as wholesale vendors — requiring shoppers to purchase at least two of the same item (though some, if buying with cash, can purchase a single garment). Each of Dongdaemun’s 20-plus malls has its own reputation — Migliore, one of the largest, is central to Dongdaemun’s bootleg culture; ApM Place and Kwanghee are go-tos for young, trendy style; Pyeonghwa is the area’s original mall and the site of a vintage book market, and Doota, which welcomes some three million annual visitors, is mostly for tourists buying single items at a significant markup.

A walk through the colossal buildings yields a melting pot of languages – English, French, Japanese, Mandarin, Spanish and Thai were heard on this particular visit. Thousands of shopping bags ready to be shipped to stores around the world line Dongdaemun’s hallways, as global shipping is fully integrated into the commercial experience there — with most malls offering on-site parcel service.

While far from ecologically friendly or obliging of trademark rights, the knock-offs at Dongdaemun are a crucial study — offering a real-time litmus test of what is currently trending in the global fashion market. While not all stalls sell verbatim copies, most of the trendy goods at Dongdaemun are influenced by viral fashion trends.

Judging from the racks there, Supreme maintains an iron grip on logo-based, clout-driven fashion. The “Supreme” merchandise at Dongdaemun takes various creative liberties in order to introduce newness to consumers. There were T-shirts that feature the Supreme logo alongside the Japanese anime cat Doraemon, there were miniature Supreme sweatsuits for children and dog clothes that stylized “Supreme” in the same font as the Subway sandwich chain’s logo — all designs that have never once been sold in a Supreme store. 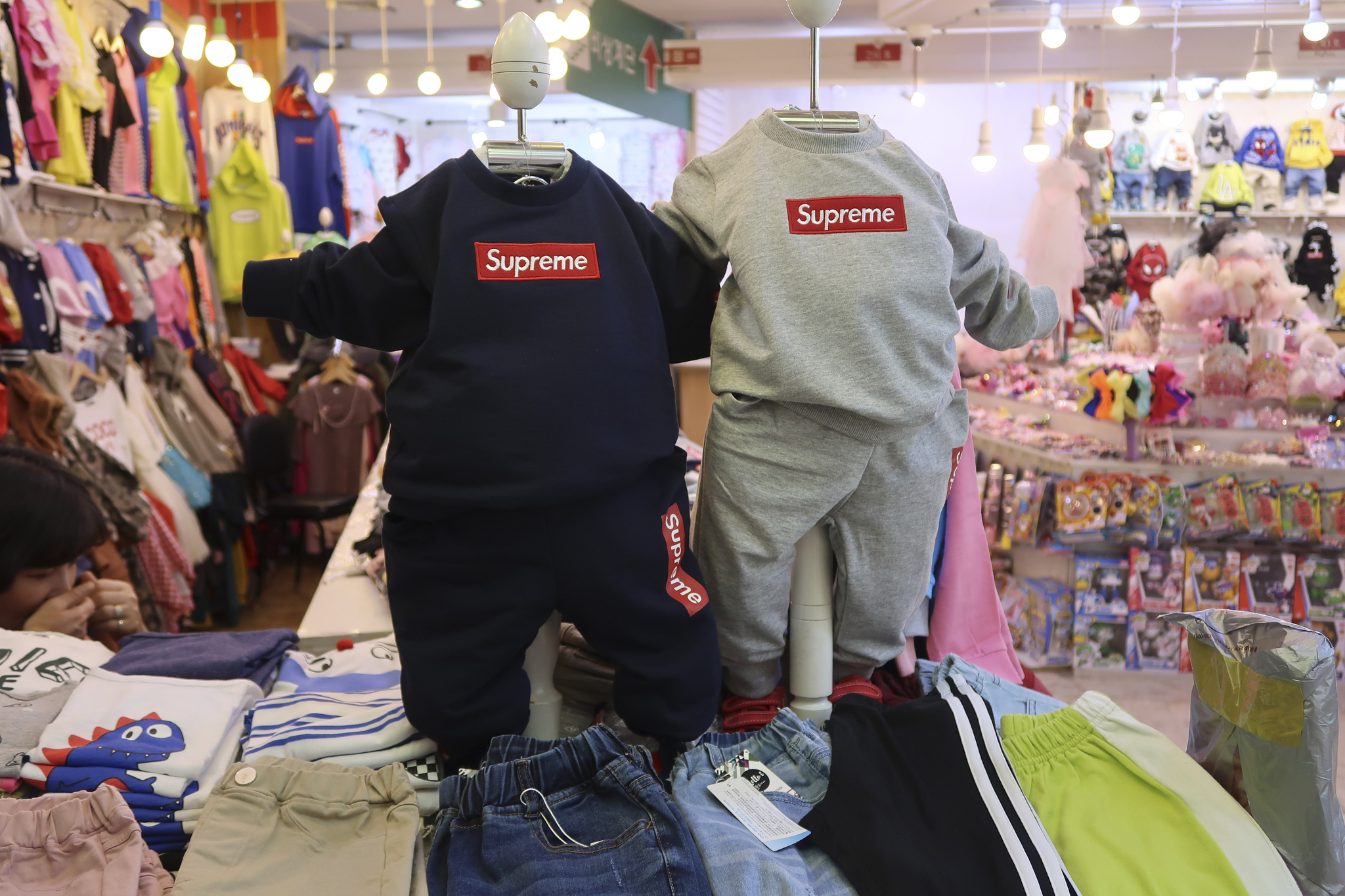 Patagonia’s logo, too, was distorted — featured in a streetwear application rather than on clothing suited to an outdoors lover. Sweatshirts and T-shirts printed with an oversize logo were seen in the markets and worn on streets across Seoul.

The 2018 LVMH Prize winning-brand Doublet was also heavily featured among the markets’ fakes — with counterfeiters applying the label’s logo, “We sell daily wear,” to T-shirts and tote bags.

A popular brand beginning to dwindle from racks at Dongdaemun could indicate a slowing interest from consumers. Off-White, previously a Dongdaemun favorite, was scarcely seen during WWD’s visit – excluding a few imitations, one of which bent the label’s logo to read “Black-White.” Balenciaga and Dior, although still present, also had fewer imitations, while Burberry has seen a rise in knock-offs within the malls’ racks.

Valentino’s VLTN streetwear-inspired logo was popular — screenprinted onto blouses, dresses, and T-shirts — one that cheekily read, “Be my VLTN.” Fendi’s Fila-inspired logo and Zucca interlocking F’s were also heavily featured — including a sweat suit blanketed in Fendi branding. Tweed styles are seeing new popularity, owed to Chanel’s partnership with Jennie Kim — a group member of K-pop sensation Blackpink — who serves as its Korean ambassador. 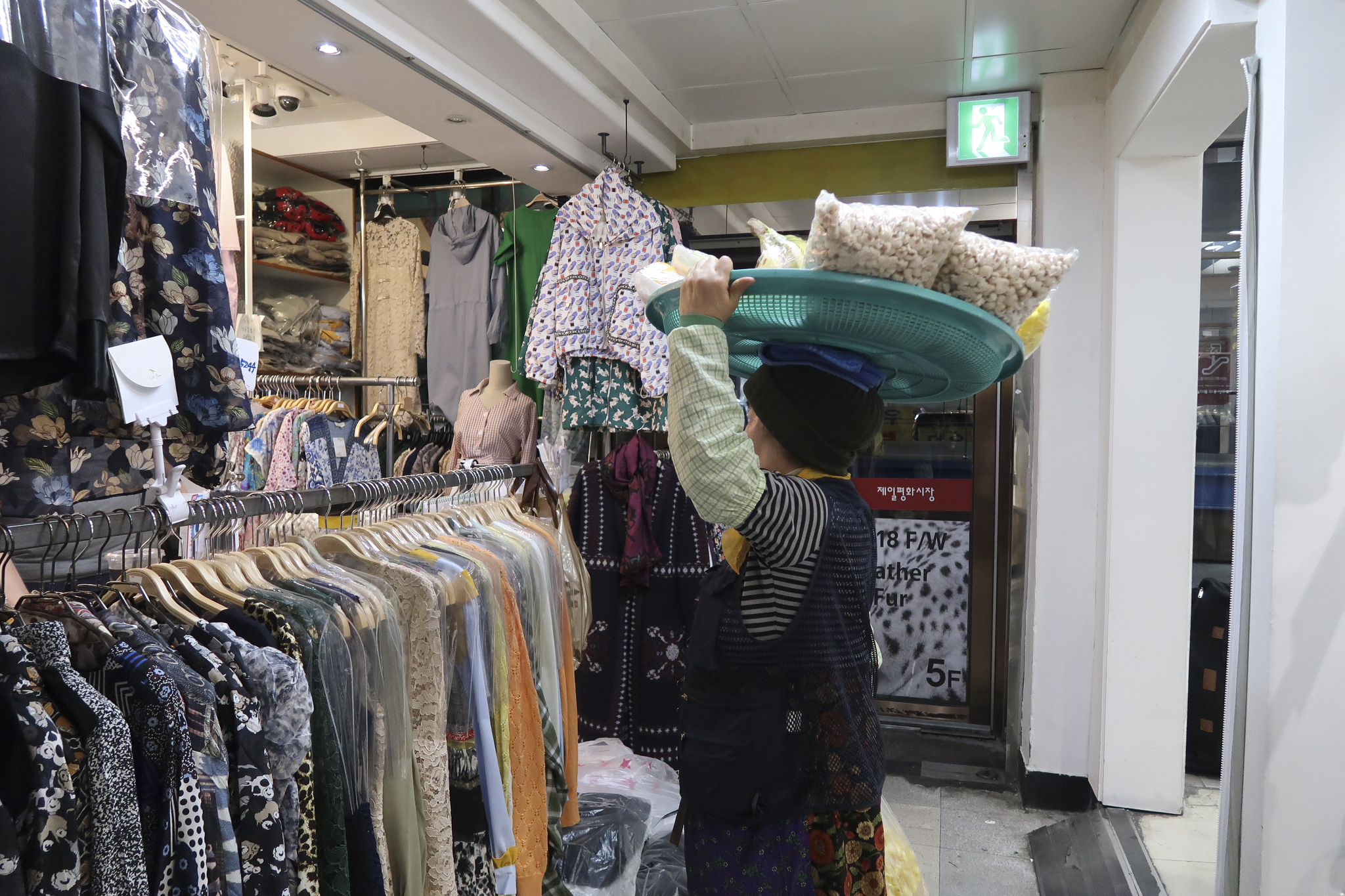 Signature styles of tailoring are even up for grabs — with some men’s wear dealers at Migliore selling suits that noted the origin of their inspiration, pulling silhouettes from Hermès, Saint Laurent and Valentino. Women’s pencil skirts copying Lanvin, Prada and Max Mara were sold in a similar manner.

Dongdaemun is not all knock-offs. More polished stalls are fully designed as immersive, aesthetic destinations — some decorated with Memphis movement furniture or antique vases to convey a lifestyle point of view.

In years past, these more fashion-forward dealers had heavily dealt in mini skirts and cutesy-type fashions but they are currently seeing a rise in more conservative styling. Cardigans, tea-length skirts, free-form dresses and baggy jean — with textile designs inspired by Molly Goddard, Jacquemus and Simone Rocha — were prevalent.

Accessories are also a main selling point — often with malls dedicating one or two floors to handbags, shoes and jewelry. Fascimiles of bags by Vivienne Westwood, Bulgari, Louis Vuitton’s collaboration with Supreme and Staud had a marked presence.

While Dongdaemun is a destination for wholesale shopping, the experience, like most things in South Korea, is being digitized. ApM has recently launched an online shopping portal that offers global shipping and a growing roster of vendors. Some 50,000 manufacturers currently operate in Dongdaemun — ample opportunity for Hallyu to reach further shopping racks across the world.