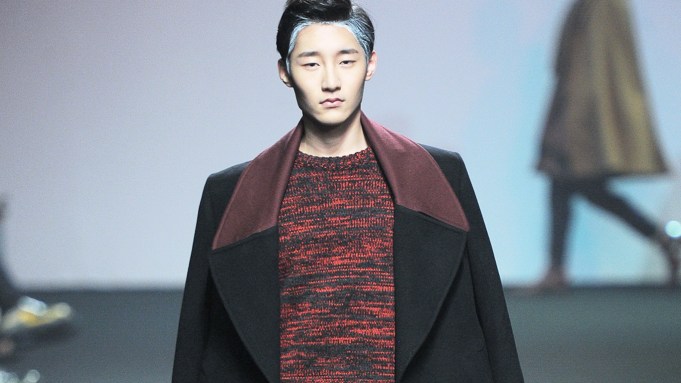 From designers on hoverboards to models in bikinis and live reggae performances, Seoul Fashion Week delivered a little bit of everything this season.

The fall edition of the shows, which ran Monday through Saturday at the Zaha Hadid-designed Dongdaemun Design Plaza, featured the work of more than 80 Korean designers. New venues and events were added this season. Generation Next, the event’s young fashion component, was held at the newly added Daesun Flour Mills Factory in Mullae-dong. Meanwhile, Fashion Kode, Seoul’s annual fashion trade show, was held in conjunction with SFW this year at J-Gran House near Namsan.

Key trends from the shows included leather jackets, men’s skirts and velvet garments like tops, blazers, pants and dresses. As expected, K-pop was a major theme. Korean tunes accompanied many runway shows, and several musicians put in appearances at various points, including Lee Gi-kwang, from boy band Beast; Tiffany and Hyo-hyeon from Girls Generation; Hyuna from 4Minute, and Meng Jia from Miss A.

“The majority of our clients are Chinese. And when we buy the same brands [worn by Kpop stars,] they tend to be fashion show pieces…international clients really like these,” said Cho.

“What I like about Korean designers is that each designer tries to be different,” said Lay Peng Pek, founder and buyer from SocietyA, a Singapore-based retailer specializing in Asian labels. “Overall with the economy and currency exchanges and fluctuations, consumer demand this year is expected to be pretty mild but we feel that it’s also a good time for designers to further build upon their branding and recognition during this long period…This is a good time to pick out brands for introducing them to our region.”

Ivan Chan, chief executive officer of Duier, a popular Chinese retailer based in Chengdu, said that in spite of the economy, budgets have increased this year.

“We have a higher budget in line with our expansion plan, although the overall economy is deteriorating,” said Chan. “We see this downturn in the economy as a good opportunity to gain market shares in both online and offline markets.”

Fiona Tan, representing luxury retailer Club 21, said that while buyers are increasingly interested in Korean fashion, the local government and organizers also need to give new designers a chance.

“I like to support new Korean designers because I think there’s a lot of talent…[But] the country doesn’t seem to support them as much,” Tan said. “I would think the designers at the Generation Next [venue] should be given more of a chance,” she said, noting that the venue located 40 minutes away from DDP was a “logistical nightmare” to get to.

Military-meets-preppy statements were spotted at men’s wear designer, Caruso, in the form of navy coats, dark trousers and culottes tinged with bright yellow hems. A traditional Korean jeongak singer performed a 10-minute solo during the entire show while seated in the middle of the runway in a flowing hanbok.

At Heich Es Heich, the label’s designer Sang-hyuk Han emerged on a hoverboard to take his bow.

A row of teenage cheerleaders stood at the front of the runway, screaming and waving banners and balloons during the show of men’s wear designer Munsoo Kwon. Inspired by the golden era of K-pop in the Nineties, Kwon’s high-energy show captured a spirit of youthful exuberance. Models sported sweaters with bearing the word “Oppa,” a term of endearment meaning older brother.

On Friday, Jean Paul Gaultier held a press conference at Dongdaemun Design Plaza for the opening of an exhibition held in partnership with Hyundai Credit Card. The French designer has brought more than 150 pieces from his archives to be viewed until June 30.

This season’s fair featured the Culture Technology Zone by the Busan Design Center. The booth introduces 3-D simulation technologies that could be applied in designing clothing and beauty products, and invites participants to engage in a unique virtual fashion experience.