With economic concerns intensifying, value and managing inventory were priorities for buyers at the market here. 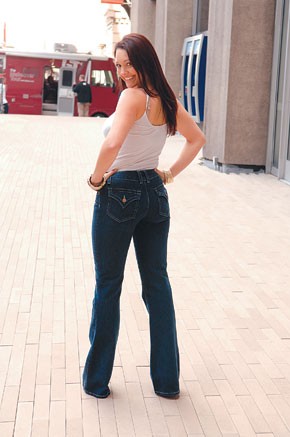 LOS ANGELES — With economic concerns intensifying, value and managing inventory were priorities for buyers at the market here.

Separates and accessories were among the most popular items. The big sellers in showrooms at the Cooper Design Space, New Mart, Gerry Building and California Market Center included tops, skirts and shorts, as well as handbags.

Many retailers said they were shopping for current season needs rather than future inventory, and were scaling back and taking a wait-and-see attitude before committing to new merchandise or large orders.

“We really have to go for what sells, we can’t take chances right now,” said Martie Travis of the Shark’s Grin in Morro Bay, Calif. “Summer is our biggest season and we’re waiting to see what happens.”

The dominance of the dress appeared to wane as buyers scouted for skirts and tops.

Among accessories brands, Pam Gregorio, an account specialist at Los Angeles-based Lockheart, said the company was focusing on achieving strong sell-throughs, not bombarding the market, and building name recognition with consumers.

“If somebody were to buy four and sell them all, that’s great; and if somebody wants eight and only sells four, that’s not so great,” she said.

The cautious approach is a reflex option from the buyers’ playbook, along with hope for a turnaround.

“Buyers now are cutting back, and they don’t buy enough for the stores, so when it’s June they will come into the market and scramble for at-once merchandise,” said Ilse Metchek, executive director of the California Fashion Association. “We’ll probably have a better June than we already do.”

For all the uneasiness, there were bright spots. Eco-friendly and value-oriented apparel did well, with buyers also focused on versatility as well as value at the Designers & Agents show.

Tokyo’s Rita Flora offered a cashmere-Tencel scoopneck wholesaling for $58, and New York’s Binetti a mixed light gray double-faced cashmere with lime green fake fur and magenta silk in a quirky vest for $219. “It’s an easy piece that you can wear with shorts or denim or a turtleneck,” said Luz Solarez, who manages sales for Binetti.

The increase in eco-minded retailers gave a boost to Zachary’s Smile, a New York-based newcomer at the Designers & Agents show. Retailers liked the $150 leather bomber made of recycled skins from its line called Remake/Remodel and Zachary’s Smile’s decision to manufacture in Vancouver and New York. “A lot of people are asking us: ‘Where are you produced?'” said co-designer Jenni Nelson.

Los Angeles-based Myne caught retailers’ attention with a green and black silk miniskirt printed with a geometric pattern for $94 at wholesale. Crispin & Basilio, also based in Los Angeles, opted for black-and-white checkers to decorate its organza miniskirt that wholesales for $138.

Eve & A, the contemporary label launching this fall from reality TV personality Whitney Port of “The Hills,” offered a 2-in-1 skirt that the wearer can adjust to be a mini or fall above the knee. Wholesaling for $100, Eve & A’s version also comes with a braided belt to enhance the combination of value and styling. As Port explained while showing her Van Nuys, Calif.-based line at the Movement Showroom, the braiding “adds a feminine touch to a skirt that’s made out of wool.”

Indeed, blending styling with good prices seemed to be a formula for success. MM Couture by Miss Me, a young contemporary line owned by Los Angeles-based Sweet People, said fall orders were up 10 percent from a year ago. Popular looks included $44 wool shawl cardigans with ribbon ties and $42 jewel-toned silk blouse with lace bibs.

As for denim, Vancouver-based Small Town scored hits with Seventies-inspired bell bottoms in light hues, such as a white denim or a frosty blue wash.

Tarzana, Calif.-based Purecolor Jeans, Jolna Design Group’s denim line that targets women who are older than 35, opted instead for dark washes and high rises (the lowest measures 9 inches) in 13 styles, all wholesaling for $64.

“I’ve seen a lot of things that are the same lately, I’m just hoping for something new this time around,” said Kat Gvodzic, who was buying items for her yet-to-open shop in Phoenix. “I’m trying to stick to things I know will do well, and am keeping my orders small because I don’t want to get stuck with too much stuff that won’t sell.”

In the accessories arena, the royal hue cast a spell on fall handbags. Accessory brands at the Brighte Companies show pointed out that the bright colors popular in spring and summer — including yellow, aqua, blue, red and green — had staying power, but that purple was outmatching the pack going forward. “Purple is a big color,” said Jalda Hoff, creator and designer of Beverly Hills-based clutch specialist Jalda.

After seasons when the handbag size pendulum swung from very large to very small, a dominant shape appears to be harder to pin down for fall. While Hoff argued that the clutch was turning into a casualwear staple, Laura Obradovich, senior account executive at Carlos Falchi, noted that the New York-based brand’s signature medium-sized Buffalo styles were making a comeback. And at Los Angeles-based Lockheart, roomy bags were carrying the day.

Buyers seemed to respond to the wide variety of offerings at Brighte.

“I love what I saw, because we need a number of things to offer customers now,” said Drew Hauld, who was buying for Whimsical boutique in Las Vegas. “Accessories seem to be the area that’s really carrying us at present.”

Overall, though, the mood at Brighte was uneasy.

“There are less people at shows; everyone is scared by the news,” Hoff said.

But at Beth Springer, the brand’s namesake said retailers were buying deep when they sensed a reliable style that would keep business humming. “We are doing a lot of immediates, but fall is picking up,” she said.

One complication was that accessories brands had trouble keeping prices down. In fact, Sydney, Australia-based Helen Kaminski raised the price of a key tote from $248 to $326 wholesale, and Lockheart’s bags rose by $75 to $100 retail across the line. Both companies attributed the price increases to manufacturing, with Gregorio at Lockheart singling out higher labor costs in China.

The rising euro continued to make it difficult for handbag makers working with Italian leathers to get a handle on material expenses. However, Springer indicated that retailers are beginning to understand brands’ pricing predicament and she mostly wasn’t forced to shave her margins. “At this point, we are kind of adjusting,” she said.