Two fashion magazines — Harper’s Bazaar’s and Vogue — will break with recent tradition by putting supermodels on their September covers. 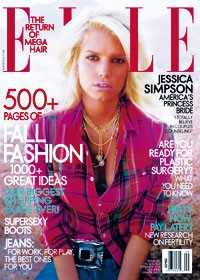 NEW YORK — When the September issues hit newsstands next month, two key fashion books will break with recent tradition by putting supermodels back on their covers.

This story first appeared in the July 9, 2004 issue of WWD. Subscribe Today.

Harper’s Bazaar’s cover girl will be Gisele Bündchen, who last graced the magazine’s cover in February 2003. Vogue is said to be announcing “The Return of the Supermodel” with its September issue, which will feature a gatefold cover of Bündchen, Karolina Kurkova, Carolyn Murphy, Liya Kedebe, Daria Werbowy and Gemma Ward, photographed by Steven Meisel. The last time a model appeared on the cover of Vogue, it was Christy Turlington and the year was 2002, a Vogue spokesman said. And neither Vogue nor Harper’s Bazaar has given a model a coveted September fashion issue in the past three years.

So is this the beginning of a trend back toward showing models on the covers of major magazines? In plainer terms, has the American appetite for celebrity finally been glutted on doses of Us Weekly, People and Star?

Not according to most magazine celebrity wranglers or, as they prefer to be called, special projects editors.

“Our readers connect more to a celebrity,” said Maggie Buckley, special projects director at Allure. And stars, especially young ones like Christina Aguilera, whose covers have been recent bestsellers for Allure and Marie Claire, still sell.

“They fare much better on the newsstand which, as far as I’m concerned, is the only reason to use them,” said Kim France, editor in chief at Lucky. The shopping magazine was originally supposed to eschew celebrity coverage, but France began using celebrities on the cover last August when she featured Mandy Moore.

“You have a split second of time to get someone’s attention at the newsstand,” said France.

Though Glamour continues to have success featuring the occasional model, such as Laetitia Casta, who appears on the August cover, by and large it, too, is using more celebrities. “We are definitely using far fewer models than we were five years ago,” said Glamour editor in chief Cynthia Leive. “Putting a celebrity on the cover is shorthand for this is new, this is current. It’s less generic. Less evergreen.”

So what gives? Are Vogue and Harper’s Bazaar simply ahead of the pack, predicting the model trend long before it takes hold in the culture? Perhaps. More likely, the two books came up short in the annual bid for September covers, a shell game that has become wildly competitive of late. Several sources close to Bazaar say editor in chief Glenda Bailey originally intended to put a celebrity on her September cover, but negotiations fell through. A Vogue spokesman declined to comment on the magazine’s decision to use models on the September cover.

In the past five years, the process of booking celebrity covers has gone from difficult to arduous to nearly impossible. Increased competition has prompted many editors to book covers farther and farther in advance. “Sometimes they ask before the movie even goes into production,” said a Hollywood publicist, who spoke on condition of anonymity. Often the strategy works, as is the case for the September cover of Vanity Fair.

“I asked Reese Witherspoon to be on the cover as soon as I heard she was making the film, ‘Vanity Fair,’” said Jane Sarkin, veteran features editor at Vanity Fair.

Studios have also complicated the booking process for magazine editors. As Web sites such as aintitcoolnews.com become better indicators of a film’s box office performance, distribution executives have begun jockeying their film release schedules around early favorites. “We are going to see a more volatile film calendar from now on,” said a source inside the film industry. “A release date can make or break a film. And if the magazine cover is off, well, the studio just puts more money into TV exposure.”

“Half the movies move after you’ve gone to press,” said Lesley Jane Seymour, editor in chief of Marie Claire, who will have at least three covers this year that are out-of-sync with the release dates of their cover subjects’ films. “You cry the first six times and then you realize they sell well anyway.”

Gwyneth Paltrow and Jude Law appeared on the cover of the magazine’s July issue, even though their movie, “Sky Captain and the World of Tomorrow,” has been moved to late September. Marie Claire’s September issue features Jennifer Lopez. Her film, “Shall We Dance?” was recently moved from its late summer release to October. And Brittany Murphy will be on the cover of the October issue even though her film, “Little Black Book,” was moved from October to August. (Cosmopolitan and Cosmogirl are also sharing her for the September cover.)

“It was too late to flip-flop the covers, but I’m confident both will do well,” said Rebecca Shalam, special projects editor at Marie Claire. “Both women sell.”

This summer has seen a pronounced lack of cover-worthy stars on the marquee. The end of “Friends” and “Sex and the City” also means Jennifer Aniston and Sarah Jessica Parker are no longer at the ready for covers during a season premiere or sweeps. And recent pregnancies in Hollywood have meant many stars aren’t available for cover shoots — though expect to see a slightly pregnant Julia Roberts on the January 2005 cover of W, promoting “Ocean’s 12.” For its September issue, W is staying on the celebrity track with its cover model Julianne Moore. (W, Vogue, Glamour, Lucky and Allure, like WWD, are owned by Advance Publications Inc.)

Whatever their cover strategies, the overall mood is upbeat after a tough 2003. Most fashion and beauty titles will be running more ad pages in September than last year. Although the increases are not large (on average 5 percent) they are significant at a time when a number of magazines — including Vogue, Glamour and Marie Claire — are still posting year-to-date ad page declines. Publishers say fashion and technology are among the categories driving growth, while beauty business remains conspicuously soft. And on the circulation front, there’s good news as well. A sampling of early sales data indicates that single-copy sales for the monthlies as a whole enjoyed a modest rebound in the first half of this year after a dismal 2003.

More good news: The decision to feature models on the cover of Vogue and Harper’s Bazaar is unlikely to drastically affect their newsstand sales. “Certain books will always sell. Their big books in September aren’t much of a risk,” said Allure’s Buckley, referring to the typically inflated newsstand sales many of the fashion books enjoy in September.

As for future covers, “Return of the Supermodel” seems to apply only to the September issue of Vogue. Early reports indicate October will feature Charlize Theron.

But, of course, that is subject to change.

— With contributions from Jeff Bercovici