Seven For All Mankind has the ultimate proof of its popularity--a counterfeit problem. 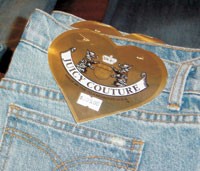 Seven For All Mankind has the ultimate proof of its popularity — a counterfeiting problem.

The five-year-old premium jeans company has moved quickly on the issue, which surfaced in August, embarking on a nationwide campaign that has resulted in 19 lawsuits being filed and the seizure of thousands of pieces of bogus merchandise.

“We are in the position of high growth and we see that people are riding on our success,” said Andreas Kurz, who took over as chief executive officer of the Los Angeles-based company in March. “We want to be very early, very strong and very swift to let everybody know that there’s a very high risk associated with trying to counterfeit our product.”

“It was critical that we hit all 18 locations simultaneously so that they couldn’t contact one another,” Paul Meyers, chief investigator for the Florida State Attorney’s office, said in a statement.

In less than three hours, an estimated $500,000 in counterfeit Seven, Diesel, Lacoste and Juicy Couture apparel and accessories were seized from retailers in Key West and Miami Beach, a private residence and from two stores in Miami’s Dolphin Mall.

“We got a tip from a retailer in Key West that said there was a store or two selling counterfeit jeans,” said Michael Heimbold, a partner with Alschuler Grossman Stein & Kahan, which represents Seven and helped orchestrate the raid.

Heimbold said that, before the raids, he and a Seven vice president, Rick Crane, traveled to Key West and bought counterfeit jeans in 16 stores.

Shawn Brosnan, director of international supply chain security and trademark protection for Liz Claiborne Inc., which owns Juicy, said Claiborne received a similar tip from one of its Key West retailers. Brosnan also made a trip to Key West’s Duval Street, where seven of the stores were located.

“There were well over two dozen different labels involved in the raid action,” said Brosnan.

Seven has taken its fight to the courts, as well. Since December, its legal team has filed 19 lawsuits against retailers in California, Georgia, Massachusetts and New York. Federal trademark infringement, counterfeiting, false designation of origin and unfair competition are among the allegations the company has levied against the retailers in each case.

Defendants in the bulk of these lawsuits have been one-shop urban retailers that are hard-pressed to invest the amount of time and money necessary to mount an effective legal defense. Many of the cases have resulted in monetary settlements and injunctions barring any future sales of counterfeit goods.

Some prominent retailers also were swept up in the cases. Filene’s Basement and its parent company, Retail Ventures Inc., were named in a complaint filed on Dec. 9 in Massachusetts federal court.

“Filene’s Basement reasonably believed that the jeans were legitimate goods when bought, so this purchase was an unfortunate, rare incident,” Mark Shulman, president of Filene’s Basement, said in a statement. “Filene’s Basement immediately pulled the disputed merchandise from its stores, and cooperated with L’Koral and the vendor Chic Lady in resolving their claims.”

Robert Glass, Loehmann’s chief operating officer, said the lawsuit “has been resolved in an amicable manner.”

Heimbold also indicated that both Filene’s and Loehmann’s had been cooperative from the outset.

Developing a strong anticounterfeiting program is especially important given Seven’s plans to expand, now that it has Bear Stearns’ backing. The firm helped recruit ceo Kurz, a former president of international licensing at Polo Ralph Lauren Corp. who also served as ceo of Diesel USA.

“We want to protect not only what we currently have, but also the future business we are trying to build,” said Kurz. “We want to turn this company into a lifestyle brand.”

Seven has been quicker to act against counterfeiters than any company where he has worked, he said. “The biggest mistake one can make is not to take things seriously,” Kurz added.

Seven’s success has spurred calls from other luxury and denim brands interested in working with it.

“It would make a lot of sense to join hands with other premium denim brands to deter counterfeiters on a larger basis,” Kurz said. “You want to attack on all fronts at the same time, and you can do that and spread out the costs.”