The first licensed line of sleepwear and loungewear bearing the Seventeen name will launch exclusively at J.C. Penney stores this fall. 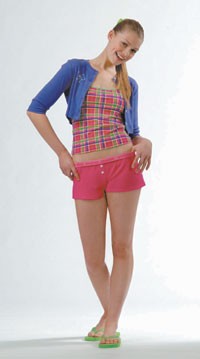 The back-to-school launch will be sold on jcpenney.com as well as at Penney’s 850 home stores. The stores and Web site also sell the Seventeen home brand of lifestyle furnishings such as bedding produced under license by Dan River, said Glen Ellen Brown, vice president of brand development for Seventeen’s publishing parent, Hearst Magazines.

The line could generate wholesale sales the first year of more than $10 million, according to industry estimates. Officials at Hearst and Jaclyn Apparel, the loungewear’s licensee, would not give a first-year sales projection.

“We showed all of the product we put together to Seventeen’s editorial staff to get feedback,” said John Halbreich, president of Jaclyn Apparel. “It’s been a good collaborative effort.”

A line of daywear and foundations by Seventeen is under development, Halbreich said.

“Our editorial staff knows the likes and points of view of our readers,” Brown said. “I think that’s why Hearst has been successful in doing this.”

Two other Hearst titles have been successful with home furnishings and accessories: Country Living, and House Beautiful, which is licensed directly to May Department Stores Co., she said.

“The idea came to us that Seventeen is a phenomenon,” Brown said. “We talk about Seventeen as an American icon. We see it as a lifestyle sort of brand and it has great mom history. Research tells us there isn’t a mother whose daughter hasn’t picked up that magazine…and the mom says, ‘Oh, my god, I remember when I was reading it.’”

The lifestyle connection of the loungewear with home furnishings is a “field that works pretty well with our objectives,” Brown said.

“It’s casual, fun and fashionable,” she said. “Part of it is we live in a fashion world and we have to live with our advertising community. We do not want to cannibalize our advertiser base.”

This story first appeared in the May 9, 2005 issue of WWD. Subscribe Today.

The loungewear will be rendered in mix-and-match groups of argyles, plaids, stripes and solid grounds in bright colors with four themes: wild, sporty, girly and classic. Fabrics for fall and holiday include one-by-one cotton knits, cotton and spandex knits, novelty yarn-dyed flannels and micro Plush fleece. Special effects include motifs of Scottish terriers with rhinestone touches, fold-down waistbands and embroidered floral treatments. Prices were not available.

Brown said the strategy is to address consumers’ changing lifestyle needs and preferences, such as moving on from the “princess characters in her room to a fashion point of view.”

Lisa Appleby, group director of brand development, said Hearst selected Jaclyn Apparel to produce the first licensed line of apparel for Seventeen because, “we looked at what their core competencies were. I met with them initially and had an interest to source unique fabrics. They had a huge sample room, which allows us flexibility to react to new product and design all of the time, and they were eager to get into this business.”

Nina Statman, marketing director for brand development at Hearst, said online marketing programs have been created for the loungewear.

“There will be marketing programs on seventeen.com’s Seventeen Shopper page, with direct links for e-commerce we can share with a full-page ad in Seventeen’s back-to-school issue,” Statman said.