Fashion is headed into quieter waters, and for many designers, that meant a change in their palettes to desert tones, white or black. For some, though, brights are still best. 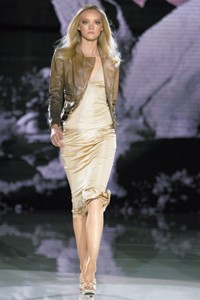 Fashion is headed into quieter waters, and for many designers, that meant a change in their palettes to desert tones, white or black. For some, though, brights are still best.

Versace: Minimal means different things to different people. To Donatella Versace, it means trading in frenetic flash for the toned-down tenor of the desert. Versace’s new, sultry restraint struck her during a recent visit to Palm Springs, translating into a strong collection almost as colorless as the desert itself. And every bit as steamy.

This was Versace at her most controlled. Her preferred palette? Believe it or not, sand, aka beige, that much-maligned symbol of fashion blah. But Donatella made it bloom like a desert flower, sometimes in delicate ombrés, its tones changing as if with the sun. Those changes more than flattered the Versace girl, who remains a major diva, still coiffed and keenly aware of her impact, even storming the runway in packs of like-minded, newly refined glamazons. She doesn’t need bold colors, unrelenting dazzle or even loud prints, not when she can slip into a fabulous dress cut from curve-loving jersey or pull on a fine-gauge sweater over skinny pants. When she tires of the sands, Versace offered two options: a subdued cactus print, and another with an amusing hotel-swimming pool motif, its moody blues keeping it from swinging too kitsch.

For evening, Donatella will always go high impact. But her quiet palette gave her gowns — slashed to there, cut out in back and sometimes all aglitter in crystal embroidery — a new refinement while retaining the heat. Now that’s desert power.

Miu Miu: Life isn’t a frill a minute, but that doesn’t mean a girl can’t still feel like a girl. Happily, she can turn to Miuccia Prada, whose constant forward motion has become an enduring trend in itself. With dresses all the rage these days, at Miu Miu, Prada delivered them differently than elsewhere in Milan — hers pared, straightened and defutzed, sometimes with a hint of the Sixties, heightened by the models’ poufy ponytails.

Within that, Prada offered considerable range: silk star prints, almost cartoon-like in their asymmetry, and crisp, large-scale eyelets worn over black briefs for propriety’s sake. Still, some girls want to flaunt fashion’s new minimalism more obviously. They can step out in tailored chambrays in combinations of light and dark grays, or surprisingly chic ribbed knit suspender shorts. Of course, Prada is a woman of many moods, and one who can propose two opposing thoughts simultaneously while making perfect sense. When it came to embellishment, she let her shoes do the talking. They came sparkled up, finished with giant crystal clips. It made for a charming finish to a long week in Milan.

Roberto Cavalli: A Roberto Cavalli show is usually a good romp: thumping music, an over-the-top theme, staggering heels and outrageous attitude. He’s one designer who doesn’t take himself too seriously. Usually. But this season, instead of giving his audience a rollicking good time, Cavalli showed a collection that was — by Cavalli standards — flat. Sure the music was loud, the heels were high and the girls strutted with steamy purpose. Cavalli did not, however, hinge his look on any particular inspiration, instead letting a general sexiness lead the way.

Ginghams — from a pair of pinup’s overalls to a ballgown worthy of Scarlett O’Hara — came first. A striped plastic trench and clear plastic jacket with red croc trim made a case for Mod. Siren gowns in ombréd chiffon trumpeted carnivale. Gold leathers, a fringed skirt and fringe-y bolero served up a little Golden Nugget chic. And he closed the show with a lineup of bare, barer, barest swimsuits. Cavalli’s look was as revved up as ever all right, but the collection lacked the razor-sharp vision that usually sets it apart.

Gianfranco Ferré: Gianfranco Ferré started his spring show with a serenade to Mexican senoras and senoritas in the form of a gentle parade of white that was as peaceful as a lullaby and muy bonita. Cotton voile blouses were prettified with smocked waists, strips of fretwork, narrow pleats and the occasional pom-pom edging. Sleeves billowed, and sometimes Ferré paired the shirts with pants or casual low-riding skirts or showed them under tailored jackets.

When he pressed on with more colorful, heavier fare, the spell was broken. But soon enough, Ferré had the crowd entranced once again. And he knows just how to rile up the Milanese audience with high-drama eveningwear. This time, he sent out see-through serapes and spangled tops over grand taffeta skirts that drew gasps from the crowd.