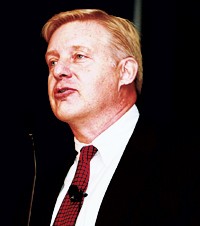 Vanishing quotas. Price deflation. Market disruptions. Trade tensions. The sourcing industry is buckling itself in for a bumpy ride in 2004 and beyond. “The only certainty we see ahead for the next five years is uncertainty. The industry will see more turmoil than it’s ever seen,” said Charles Turlinski, executive vice president and chief administrative officer of Express, who made the comments during a roundtable discussion on global sourcing.

The panelists sketched a picture of an industry responding to rapid changes in technology and sourcing, even as it prepares for its biggest transition ever — the elimination of quotas in 2005. Starting Jan. 1 of that year, quotas among the 164 member nations of the World Trade Organization — including China — will be eliminated.

“Everyone is focusing on 2005, but the problem really starts in 2004,” said Fung. “And the big question is what the U.S. is doing about it, especially in relation to China.”

Fung, who expects 2004 to be the most difficult year he’s ever faced, said it looks like the U.S. administration will end up reimposing quotas on certain categories using the so-called “safeguard” mechanism that was written into the agreement that brought China into the WTO.

Textile groups already have sought to trigger the safeguard for categories like brassieres and dressing gowns where quotas have already been eliminated and imports from China have surged as a result. “It looks like [the administration] will invoke it,” said Fung.

The elimination of quotas will take away a major cost of goods, forcing sourcers to reevaluate the entire production matrix. The impact on countries already receiving quota exemption through initiatives like the North American Free Trade Initiative or the Caribbean Trade Preference Act will be significant, said Fung.

“The quota premium varies, but it runs on average at about 15 percent of the garment cost,” said Fung. “That’s a significant cushion that will be eliminated in 2005.”

Quota elimination also will change the allocation of production within each country, said Fung. That’s because certain inefficient producers were able to compete in the global market because they had access to quotas on favorable terms. With quotas eliminated, those factories will lose their cost advantage and other, more efficient local suppliers might be more cost competitive.

Fung also pointed out another wrinkle in the quota-allocation game, namely that in 2004, factories will no longer be able to borrow against future quota allocation — because there won’t be any. That could cause all sorts of complications as quotas covering spring 2005 shipments start to run dry.

“The forward market for quota in China has already shot up,” said Fung. “And it’s really going to hit in the second half.” On the other hand, companies that can push orders into the beginning of 2005 will pay no quota, creating the potential for chaos on the docks starting Jan. 1.

A sharp price deflation will come “virtually overnight” when quotas are eliminated, Fung said, especially because some big retailers are passing “every penny saved” on to customers. And although there have been increases in cotton, wool and polyester costs, those haven’t led to higher prices because they’ve been absorbed by manufacturers.

“Every member of the production supply chain is being squeezed,” he said.

As if the prospect of no quotas wasn’t enough to grapple with, sourcers must cope with a number of new technologies that could shake up the industry even as they promise to bring lower costs, according to Brink.

Chief among these is the radio frequency identification label, an advanced form of the EAS labels that the industry now uses mainly for theft prevention. Unlike the small-capacity EAS technology, the upgraded RFIDs use a 96-bit chip, which means they can carry as much, or more, information as a bar code, all on a chip the size of a quarter.

The RFID chips could eventually be used to track products from the factory floor until they leave the store, said Brink. That could lead to the elimination of chargebacks, 100 percent inventory accuracy, the elimination of shrinkage and a better in-stock position on the retail floor.

Long after the collapse of the dot-com bubble, the Internet is still creating profound changes in the economics of industry, said Brink. The latest unforeseen development is the transfer of support staff overseas as companies use cheap e-mail communication and cheap overseas labor to trim their selling, general and administrative costs.

Brink said he expects fashion companies to follow the lead of firms like Dell and Oracle that have already relocated important support functions offshore. The move is easier than transferring manufacturing because there are no duty or quota issues to solve. “In the next decade, it may be cost prohibitive to retain SG&A in the U.S.,” he said.

Collaboration, planning and forecasting systems and replenishment, which connect members of the supply chain, will be an important tool if the industry wants to approach the speed of Zara, which claims it can get goods from design table to store within three weeks. “Zara’s success is not easily duplicated, but one of the critical elements is good CPFR,” he said.

Other technologies that should speed time to market: three-dimensional modeling software that will cut design and sampling times, and Web-enabled systems to track the status of products during the design-and-development phase.

Another innovation that would shake up the industry is a ground effect cargo aircraft, said Brink. Boeing Co. has proposed building the Pelican, a massive cargo plane that would save fuel by flying very close to the ground. If it works as planned, the cost of air transport could come down to only double that of steam freight, which would have a big effect on quick-response business out of Latin America, Brink said.

As they fine-tune their supply chains in advance of 2005, fashion companies should focus on their abilities to deliver in three areas: speed, flexibility and price, said Turlinski. While shifts in global economics create opportunities for cheaper deals, companies should beware of becoming “nomadic” sourcers that search the world looking for the best price.

“It’s not good,” he said. “We seek to take 15 percent of a factory’s business so that we can establish a relationship.”

In today’s shifting landscape, companies can benefit from sourcing agents even if they have an in-house production office, said Turlinski. For example, when cashmere was hot, Express bought all the production it could in North Africa, then used an agent to secure another 500,000 units out of Madagascar.

Companies that are entirely focusing their efforts on China might lose out on such opportunities, he said. “The thinking used to be that if you had an office in Shenzhen, you should be covered [in 2005]. But that’s just not the way the world is going to be.”

After the demise of the quota system, countries like Indonesia, Pakistan and Madagascar will still be formidable competitors in various niches, the panelists agreed.