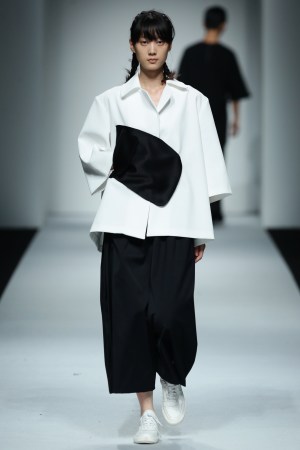 Shanghai Fashion Week kicked off October 13 with a roster of increasingly consistent designers from China showing spring collections. Along with the rise of an independent design culture in the country, a change in both the retail mind-set and consumer desires has simultaneously increased the number of stores and boutiques willing to take a chance on local talent.

A few short years ago, a very different crowd populated the fashion week tents located in the city’s upmarket shopping district, Xintiandi. Today, buyers from across China — as well as some from overseas — are joining media and other industry players. The event’s higher profile is also in evident outside the tents, where interested onlookers peruse the parade of street style and scalpers sell tickets to the shows.

Here are some highlights from the spring 2016 collections.

Fake Natoo: Beijing-born Zhang Na showed a breezy, casual Fake Natoo collection for spring, opening her show with a series of white cotton shirts, trousers and shirtdresses — worn loose and sometimes layered. While the lineup lacked the drama and gravitas of her fall outing, slinky full-length silk dresses and wide-leg jumpsuits hanging from barely-there crisscross spaghetti straps were a highlight.

The designer also increased her use of prints on silk and chiffon dresses of varying lengths. Asymmetry added interest to many of the looks, as did the occasional oversize bow — a play on proportion that contrasted with the clean lines of the collection.

Black Spoon: Moti Bai was one of a group of Central Saint Martins grads on the schedule at Shanghai Fashion Week and she delivered a Black Spoon collection for spring replete with her trademark romanticism. Drop-waist dresses in printed silk, voluminous skirts falling to midcalf and oversize organza outer layers — with correspondingly large ruffles at the hem and sleeves — were overtly pretty without slipping too far into girlish territory.

Some looks, with billowing sleeves gathered at the wrist and frilly collars, flirted with the thin line between romanticism and Hollywood pirate, but on the whole, the conceptual nature of Bai’s collection didn’t interfere with its commercial appeal.

C.J. Yao: Shanghai-born Central Saint Martins alumnus C.J. Yao expanded on the sportswear concept of her last spring collection and took it to a whole new level for spring 2016. Models ran partway down the runway before settling into a more conventional strut — emphasizing that these clothes were meant for women on the move.

Tapping into international trends such as ath-leisure, midcalf to full-length pleated skirts, fringed details and wide-leg short trousers, Yao executed each look with a heavy dose of her own signatures, which include layering, leather accents and color-blocking. In some cases, trends were combined in innovative ways, as when oversize tees were sewn together with pleated skirts to create boxy, drop-waist dresses.

The palette featured plenty of blues and greens — of the electric and neon variety — used as a base or accent color, alongside metallics, black, gray and white.

The Central Saint Martins graduate — who already counts Opening Ceremony, H. Lorenzo and 10 Corso Como among her brand’s stockists — presented a colorful collection titled “After School.” The lineup was focused on throwbacks to the innocence of childhood — such as puppy and kitten motifs — as well as a sexy update on the tracksuits commonly worn as school uniforms in China.

Asymmetric tennis skirts were layered over silver-sequined pants, pinafore dresses had wide-pleated skirts or denim that fell straight to ankle length. Wang also showed a drop-waist T-shirt dress with a ruffled yellow skirt and sheer organza layers in black and white flecked with gold. The Museum of Friendship girl clearly just wants to have fun.

Nicole Zhang: After launching an accessories brand in 2011, Nicole Zhang debuted her ready-to-wear line two years later, and despite not having a traditional design background, the former visual artist for international houses such as Dior and Prada has won fans in her home country with her unfussy aesthetic — which comes complete with a touch of rock ’n’ roll. This season there was a bit of disco, too, if the head-to-toe Lurex looks that opened the show are to be believed.

Zhang’s long-sleeve tops, trousers and slipdresses all featured elongated lines and body-skimming cuts. The mixture of luxe and casual was stark, with plenty of denim pieces spliced with louche suiting and loosely woven, bejeweled oversize outerwear.

Boundless: Veteran Chinese designer Zhang Da first came to international attention as a designer for Shang Xia, a luxury Chinese label created by French house Hermès. His own label is made up of deceptively simple garments and yet it also manages to reference the complexity of China’s place in the world, as well as the country’s revolutionary history.

The spring collection opened with a series of asymmetric tops, layered over unhemmed white shirts, with skirts and trousers falling between the knee and ankle. Wide sleeves and wide-leg pants were the order of the day, with fabric folds, slits and oversize pockets adding interest. The show closed with a series of graphic sweatshirt and jersey dresses as well as graphic T-shirts and skirts, emblazoned with slogans in both Chinese and English.

In this heavily textural collection, Zhang utilized materials as diverse as silk, viscose, chiffon, lace and denim. Pops of color, as in contrasting ribbons threaded through coats, proved effective. Tailoring was the focus, with layers, cutouts and sheer panels providing interest.

WMWM: Mushroom Song has garnered some hype recently among China fashion insiders as she is now one of a growing number of mainland designers stocked by the region’s highest-profile department store, Lane Crawford.

Song’s spring collection for WMWM, as with her previous efforts, featured androgynous looks for men and women, primarily in black and white with an occasional flash of blue and a rare appearance by peach. Her main focus was incorporating a series of exaggerated elements: large cuffs and pockets, dramatic folds and extra-long sleeves. Most looks featured wide-leg pants constructed with an abundance of fabric, while several white cocoon coats were a highlight.

Mikumkum: Designer Lu Kun has been a major presence on Shanghai’s fashion scene for a decade and with Mikumkum — his diffusion line aimed at younger consumers — he maintains his signature elements, including expert cutting and tailoring.

Unlike many of the young Chinese designers on Shanghai Fashion Week’s spring schedule, Lu works an aesthetic that is both overtly feminine and obviously inspired by Chinese history and culture. This collection referenced the ancient — and famously Chinese — art of porcelain-making.

While minimalism and androgyny have been big here this season, that really isn’t Lu’s thing. Instead, he layered his dresses in white and blue lace to reinterpret porcelain patterns in clothing form. Ruffles featured heavily and pieces were modestly cut — more pretty than sexy.

Ffixxed Studios: This Shenzhen-based label, helmed by art and design duo Kain Picken and Fiona Lau, offers both men’s and women’s collections and reflects the designers’ preoccupation with the role clothing plays in everyday life.

Their latest lineup for spring had a relaxed vibe inspired by the off-duty nature of summer. Outerwear reminiscent of streamlined bathrobes played a major role, as did custom-made, digitally printed panels depicting painterly scenes of flowers in vases, or seascapes. The multipurpose potential of some pieces was also clever — a backless apron dress, for example, featured a front that could be folded down to create a layered skirt.