New faces, a focus on business-to-consumer initiatives, and fully physical shows made for a busy season.

SHANGHAI — While the main schedule for Shanghai Fashion Week concluded this week, with the first presentations beginning in mid-March and stragglers such as Windowsen still to show at the end of April, the season was truly more than a month.

Enjoying the luxury of fully physical showcases — the Dior pre-fall 2021 show alone had a guest list of 1,000 people for its disco-themed night — there was a strong chorus from event to event to highlight Chinese creativity, from the announcement of the winners of the inaugural Yu Prize to the creation of a new award, the Hu Fashion Forward prize, by the retailer LMDS and actress Fan Bingbing.

In particular, Shanghai Fashion Week organizers espoused its new direct-to-consumer initiatives tapping China’s top livestreamers Viya and Austin Li in multidesigner, see now, buy now fashion showcases. In her event, “Seeing the Future,” Viya picked the work of 15 designers — among them Lost General, Shine Li and Masha Ma — and racked up 410 million renminbi, or $62.8 million, in sales. Austin Li similarly supported 11 designers in a Tmall-streamed fashion show. Balabala, the leading children’s wear brand in China, who this season did a crossover with Jason Wu, livestreamed its show from the Shanghai Children’s Art Theatre, which drove $26.9 million in sales and attracted more than 1.2 billion views on Weibo. Even Dior got in on the see now, buy now action, showcasing a pre-fall collection that — while the imagery had been made public earlier — was the first time it was shown on a runway, with pieces available for order immediately after the show.

“At present, many young Chinese designers still use the ‘showroom plus buyer plus wholesale’ format from the West as their first choice for commercial development. Brands that launch this way may not encounter problems but over time, with China’s rapid development, it’s easy to be eliminated,” said Xiaolei Lv, vice secretary of Shanghai Fashion Week. 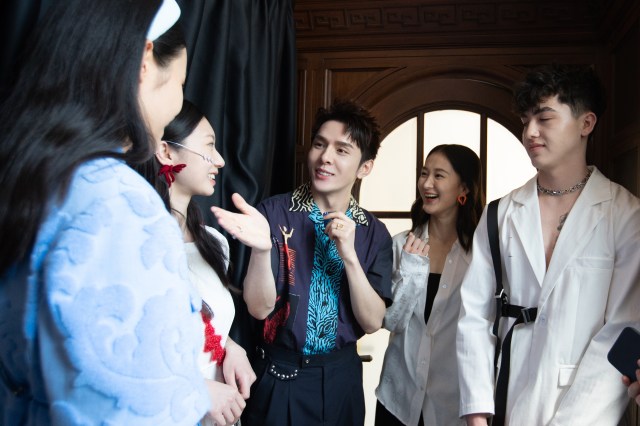 But at traditional showrooms, too, feedback was that business was brisk as the market enjoyed repatriated spending from consumers that translated into buyers’ bigger budgets and more daring selections. On Thursday, government data showed that retail sales nationally in the first quarter of the year surged 33.9 percent year-over-year, albeit off a low base.

Julio Ng, director of the showroom Seiya Nakamura 2.24, said one of his top concerns was how to manage the demand coming in.

“Compared to the last year, this new autumn-winter probably we hit a 200 percent increase [in orders],” he said. “Of course, money is an issue but to grow the brand in a very healthy way, it’s a main challenge. In the Chinese mentality everyone’s looking into the short-term return and especially in this great moment of China right now, it’s easy to lose sight and to look into just maximizing the profit.

“In China, all the domestic brands are equipped to do a lot of restocking…but at the same time, if they go up so fast, you know they probably die out very fast as well. So we don’t want that kind of hype for our brands. We want our brands to be more sustainable as a business.”

Here, a look at the top five show highlights from Shanghai Fashion Week. 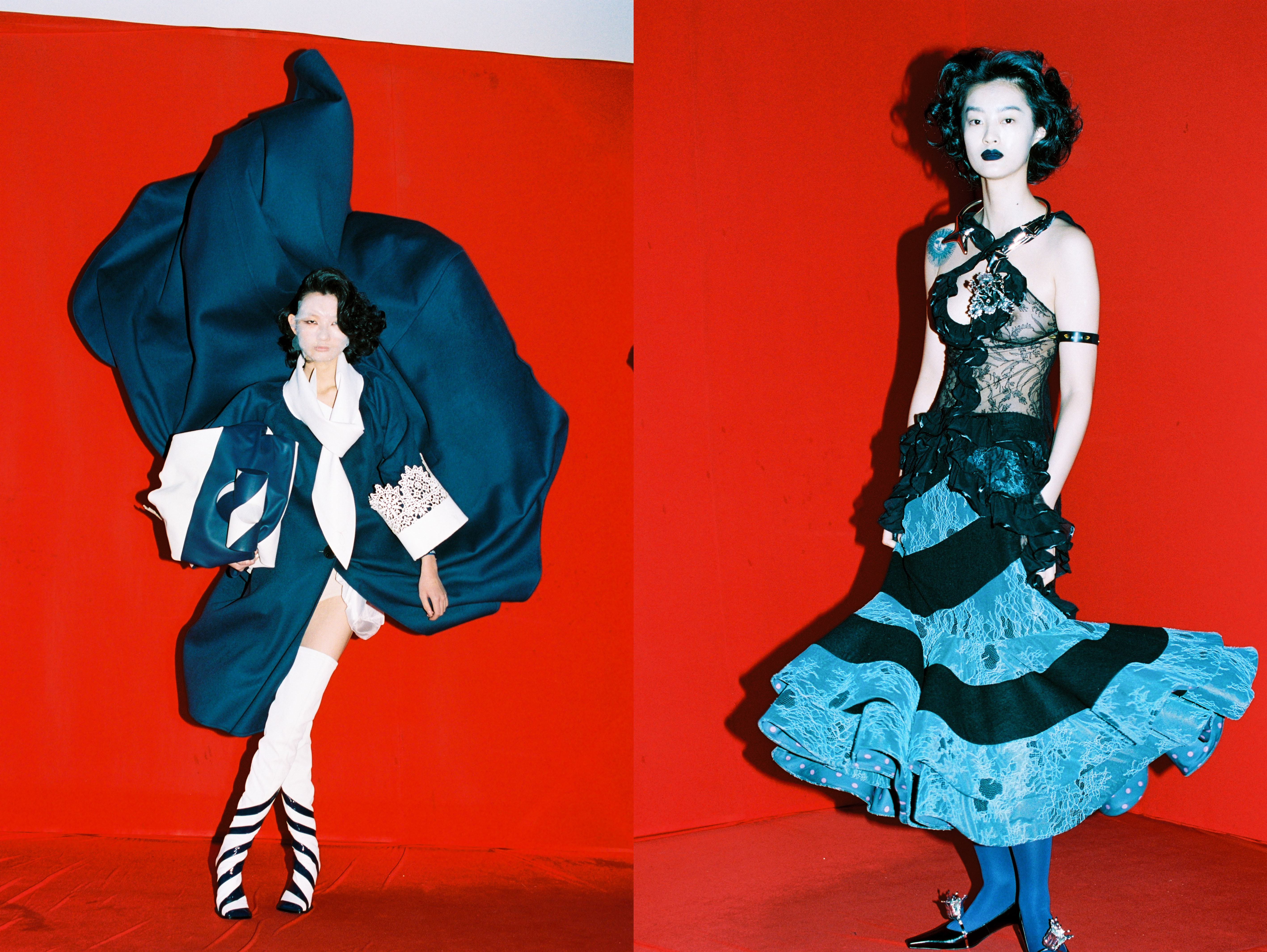 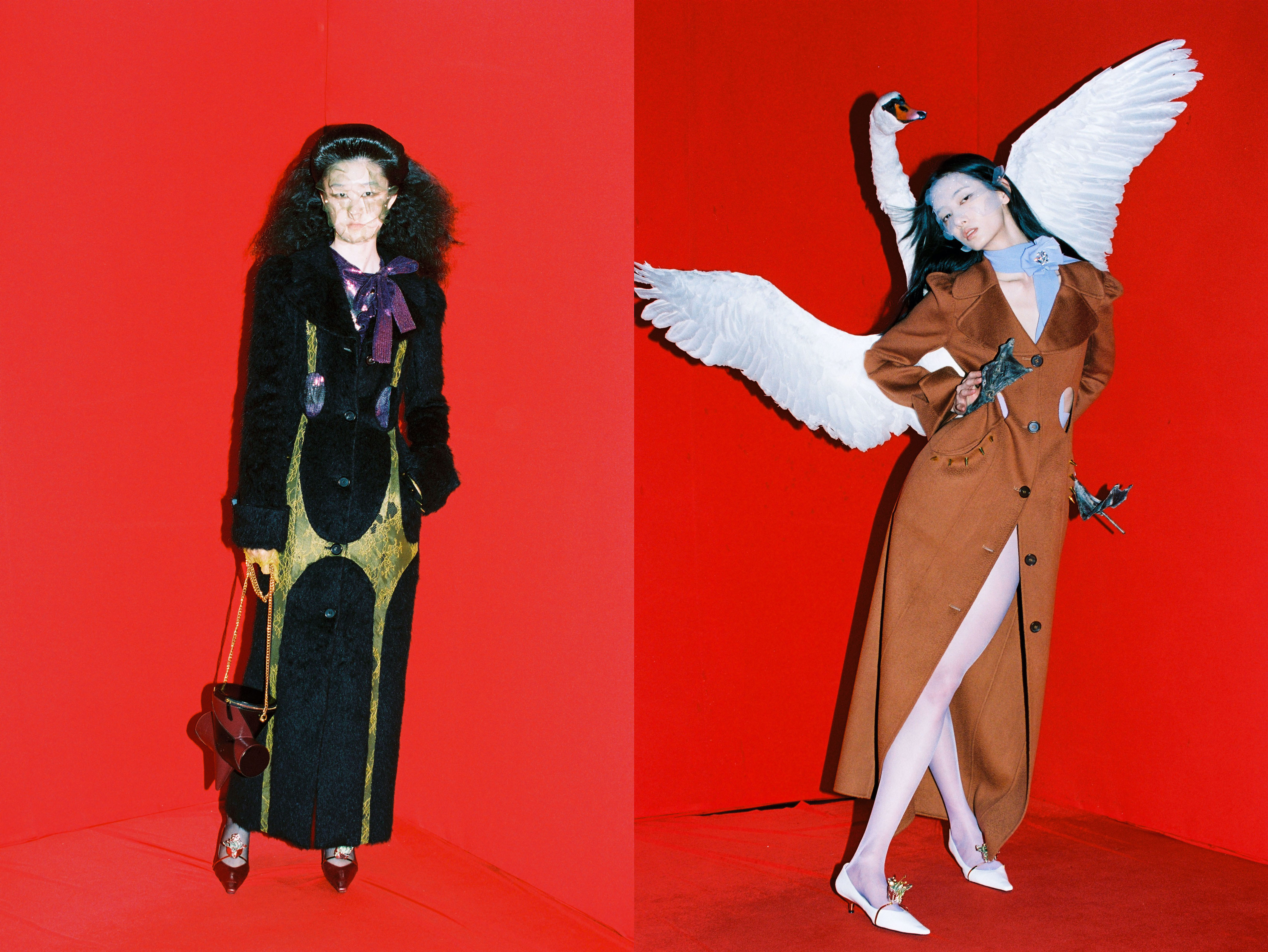 The Chongqing-born but Beijing-raised Chen was one of the most hotly anticipated names on the circuit this season after having his graduate collection at Central Saint Martins spotted by Labelhood founder Tasha Liu. His first proper show, “Debutante,” was a theatrical debut of 35 looks that mixed an impressive range of materials — mechanical parts, rubber and metal — with soft fabrics like lace, cashmere and silk.

“There are many textures and textiles in the collection,” Chen said. “For example, there are dresses made by packing tapes, which is very experimental, there are dresses and skirts embroidered with recycled metal beads — for sustainability but also I like the roughness of those materials. There are lots and lots of colors in this collection because of how much I like colors, very aggressive color combinations.” 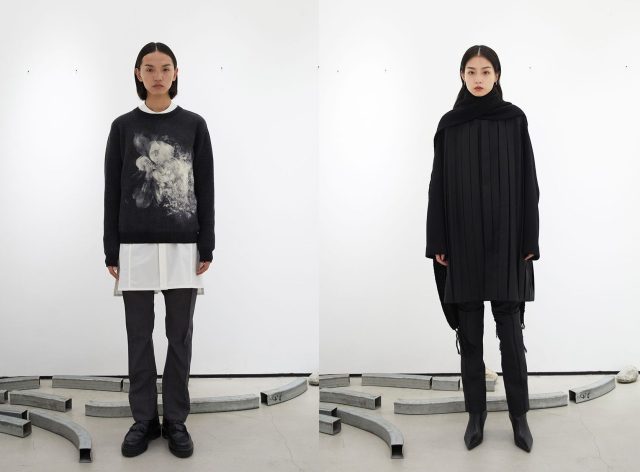 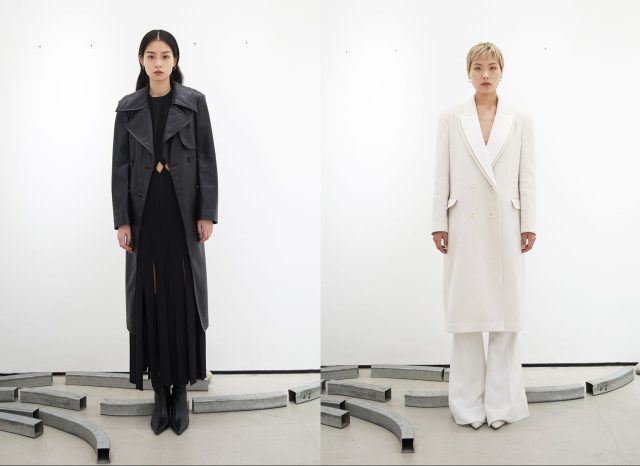 “It is never time that passes, but us,” read the notes from designer Sun Yun, who explored the concept of parallel universes and the malleability of time.

Sun, who has another life as an architect, created not just the clothes, but the looping metal installations on set that went with his fall presentation. He’s established a code for his label of elegant tailoring with unexpected detailing. This season it led to discreet cut outs, double coat lapels and textural buttons developed with Thai jewelry designer Noon Passama that were inspired by Dali’s famous piece “Melting Watch,” and plenty of pleats.

“Time is like fabric, it can be folded. We try to fold the past and the future,” he said. 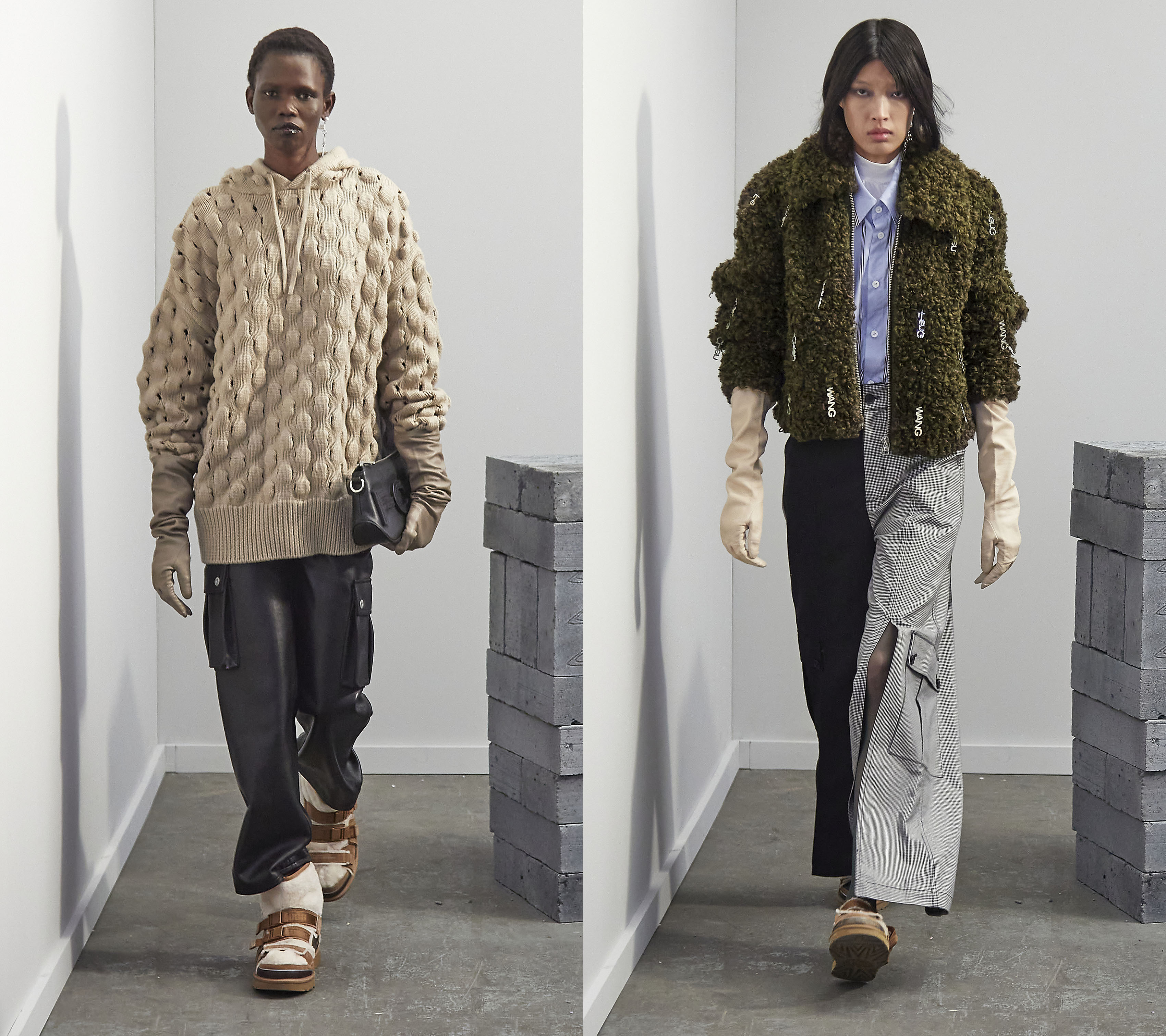 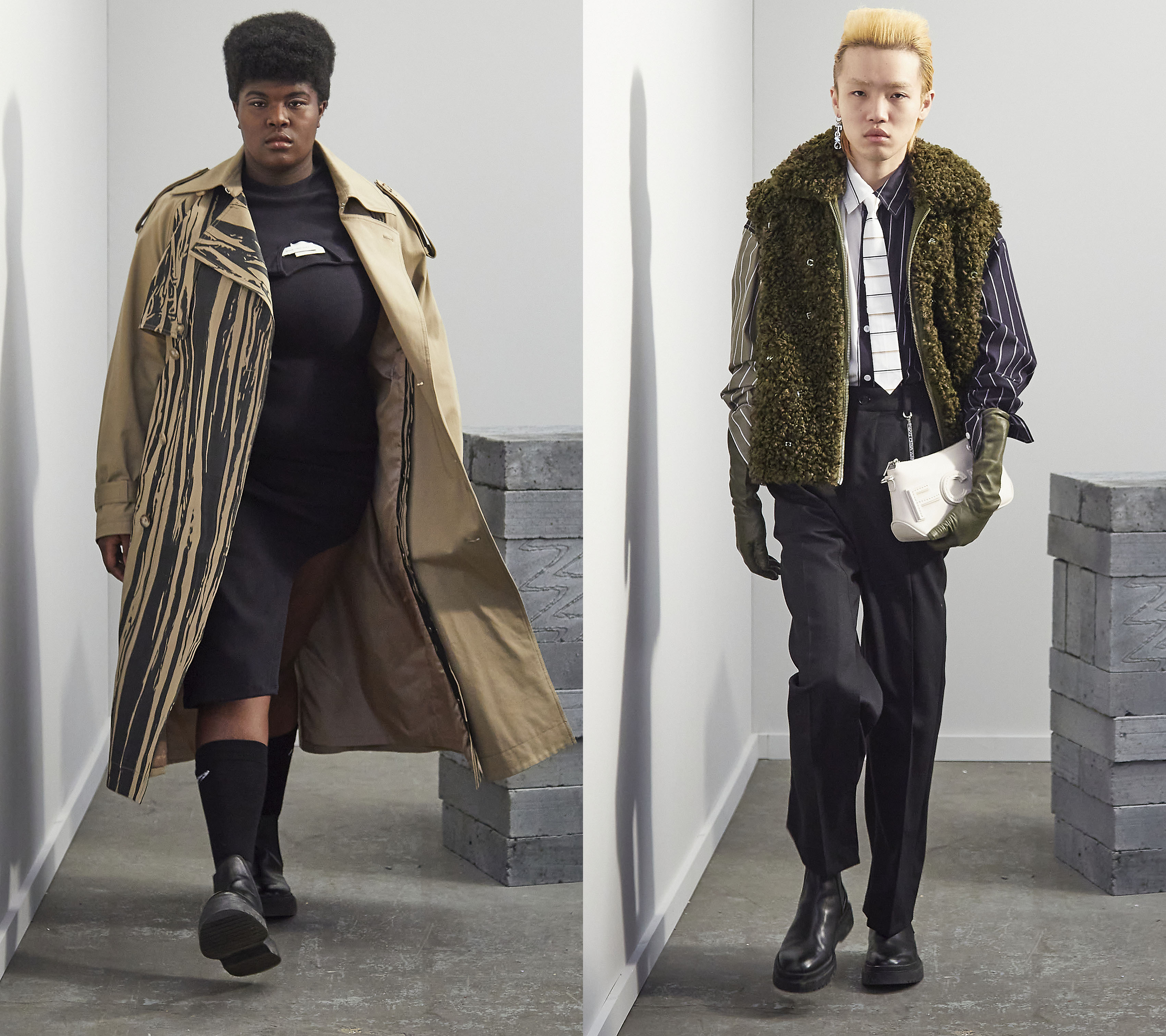 Until now, Wang has been known as a men’s wear designer, but starting with this collection, which explored traditional Chinese brush painting techniques on denim and deconstructed tailoring and the concept of the phoenix, it’s the designer’s hope that going forward her work will be regarded as genderless.

“The Western phoenix and the Eastern phoenix are a bit different,” she said at a long dinner table, which also acted as a runway centerpiece with models walking around seated guests. The phoenix, which is pronounced in Mandarin as “feng huang,” also happens to be close to her own name Feng Chen Wang. “In Chinese culture, the ‘feng’ and the ‘huang’ are male and female together, like the yin and the yang,” she said.

Models also showcased a new footwear piece Wang designed in her first collaboration with Uggs: a shoe that transitions from sandal to warm boot because of a removable sheepskin lining that can be slipped in or out. The brands are already planning a second drop this October, with Wang promising there will be more to pick from in the second collaboration: two styles of footwear in several colorways, an accessory, and an apparel item. 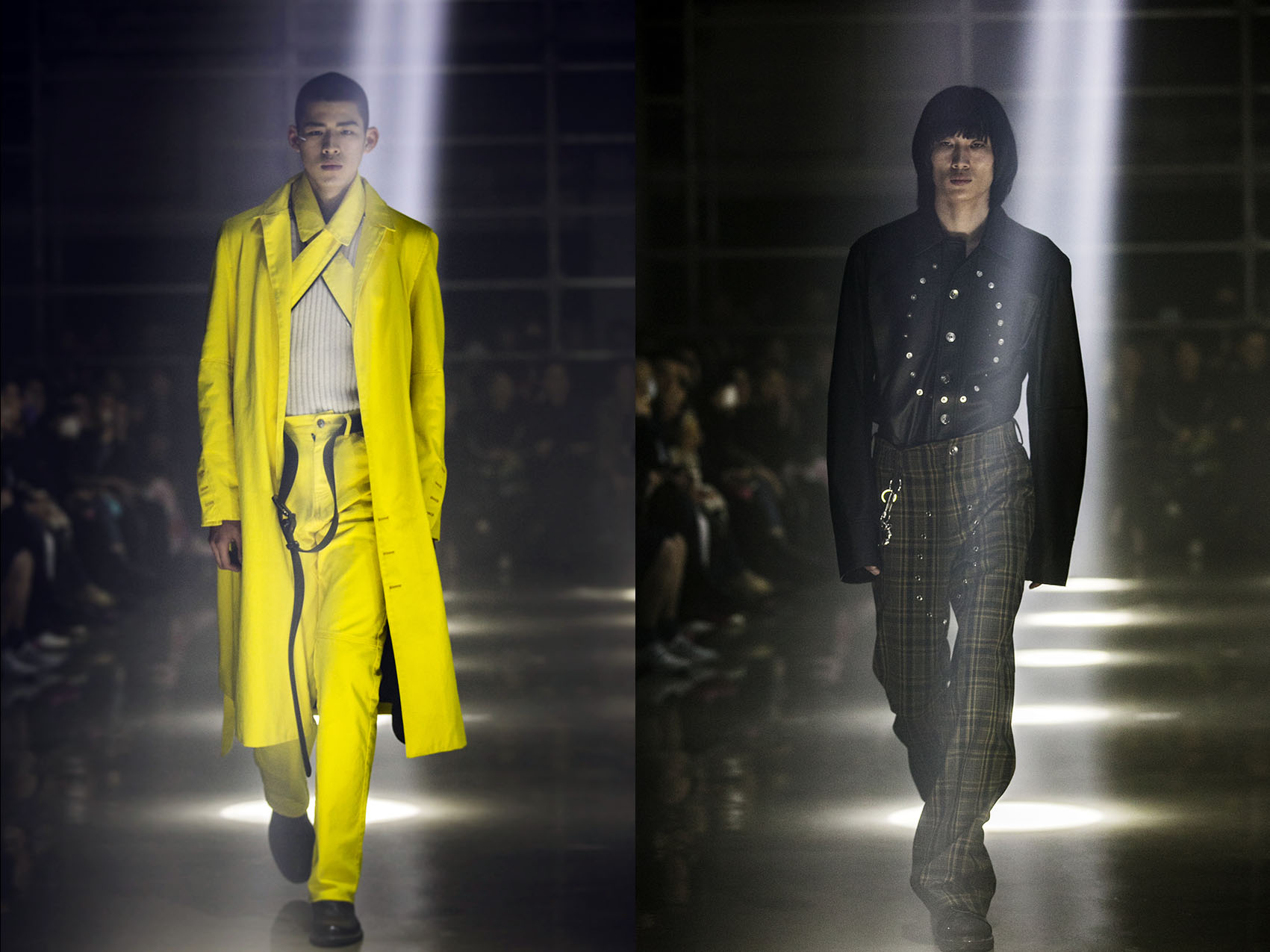 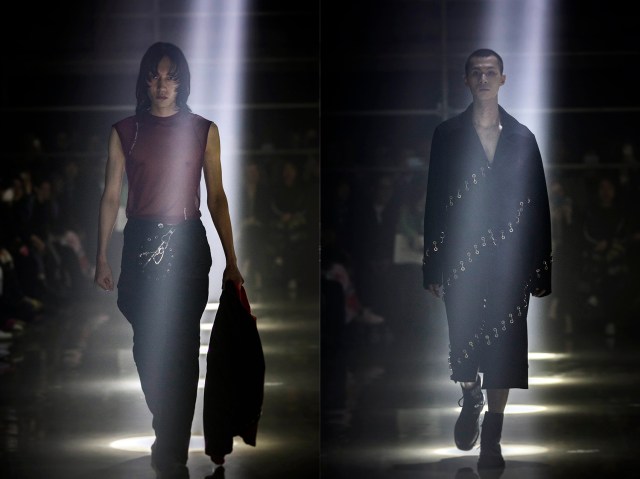 “It’s really like fragmented memories, sort of like a recap of the last year,” said Ximon Lee, back from Berlin, where he’s usually based. Models splashed through wet industrial floors in a show that explored the relationship between the masculine and the decorative in an interplay of hardware and fabrics.

“In Europe, it was a hard lockdown and I was very limited with only a few very close friends,” Lee said. “We would spend our time together outdoors so there’s a lot of botanical printing and then a lot of prints of boys by the lake, and these kind of abstract elements, like different body parts being highlighted.”

Coats were sliced up but held together by metal rings and eyelets and rivets circled the crotch on several looks and loosely looped belts hinted provocatively.

“Everyone’s asking a lot this season, ‘Oh, you have a lot of really vibrant colors, it’s a big color story,'” Lee said. “I just feel like after this flat and sort of quiet time in Europe, it’s an explosion of different emotions.” 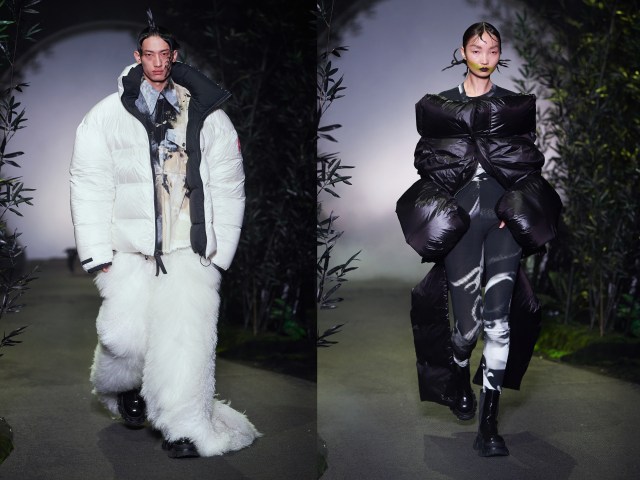 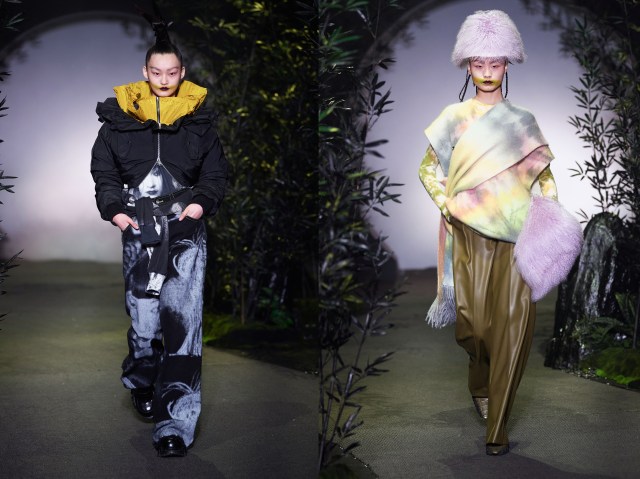 It’s been a tumultuous time for the Asian diaspora the last several weeks with the number of reported hate crimes against minorities on the rise, so Chen’s collection “Daughter of the Dragon,” which referenced the Chinese-American actress Anna May Wong, felt more timely than ever. While Wong broke barriers in Hollywood, throughout her life she struggled to be seen in roles that were not fetishized or boxed her in as a “dragon lady.” This collection included classic black-and-white movie imagery, in a nod to the film “Daughter of the Dragon,” one of the few roles where Wong was able to play the hero instead of the villain.

“She’s not as glamorous as you might imagine just from seeing her in the movies,” Chen said. “She really struggled to survive in the movie industry and she really fought for the status of Asian females in Western society. What I want to present in this collection is not just her beautiful elegance but her strong female power to empower all the girls.”

Chen continued her collaboration with Canada Goose, a brand that’s immensely popular in China, after debuting an initial spring season crossover with the brand. This second capsule carried 20 pieces, doubled from last season, although production delays meant Chen could only display four pieces in the show. Chen put her spin on the Canadian brand’s signature Snow Mantra jacket enriching it with Chinese hand embroidery on the back, while also working with Paris-based vegan accessory brand Rombaut to introduce a hybrid “dragon teeth” sneaker.