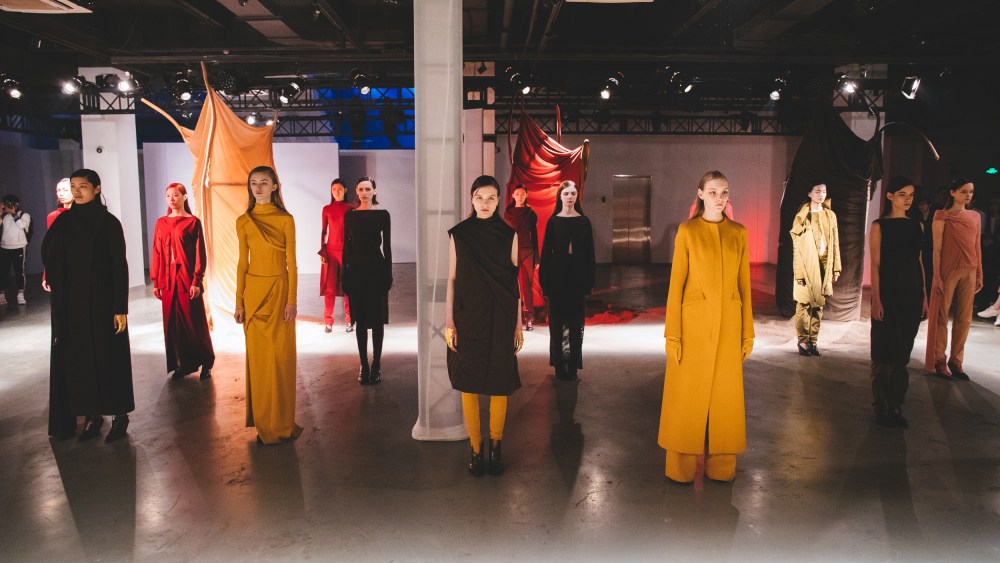 SHANGHAI — Business was brisk at Shanghai Fashion Week, which wrapped Tuesday after seven days of runway shows, “presentations” from up-and-coming talent and a multitude of showrooms. Hundreds of brands met buyers from China’s booming multibrand boutiques, e-commerce players and department stores from here and abroad.

“It’s far more forward-thinking than I thought. It’s really fresh and original, which I wasn’t really expecting. It’s quite ahead of the game, compared with some of the other fashion weeks. London and Paris kind of just stick to what they know, but Shanghai is thinking outside of the box,” said Harvey Nichols junior buyer, Rachel Cooper, a first-time visitor to Shanghai Fashion Week.

“I’ve said this for a while now but I do feel that Shanghai Fashion Week just gets better and better. The quality of the shows and presentations, as well as the plethora of the events happening alongside — such as Dior choosing to hold [its] haute couture show this week in Shanghai — reflect its rising prominence as a must-visit fashion week, not just in Asia but internationally. As a buyer, it’s also been great to see the growth in showrooms during Shanghai Fashion Week as well as the increasing crop of international brands [that] are choosing to bring collections to Shanghai,” Xin said.

China’s brightest design talent is taking what it has learned from the world’s best fashion schools and returning to the Middle Kingdom, where manufacturing know-how is at the ready and a huge market desirous of niche and high-quality fashion product from both Chinese and international labels is welcoming them with open arms.

According to Echo Zhuang, international buying director of Chinese retail giant Bailian Group’s multibrand retail concept stores The Balancing, the Chinese brands they already stock, such as Staff Only, ShuShu/Tong and Museum of Friendship all feature in the store’s top five brands for sell-through.

“Of course, they have the advantage of being Chinese, which is preferred by the customers, but they also have craftsmanship and quality at a competitive price. I think Shanghai Fashion Week is quite young but the speed of development is amazing. Every season, you have so many new brands. At Paris or Milan, it’s more stable, they don’t have the growth of new designers we are seeing in Shanghai,” Zhuang explained.

“Shanghai Fashion Week represents Shanghai and China — both the current and future versions. I think this is very simple, Shanghai is the focus of fashion in China and Shanghai’s fashion culture is the most international fashion culture in China. China and Shanghai both have traditions, both have population, both have the market. Compared with anywhere in the world, you can say Shanghai and China represent a very strong market.”

Shanghai has a twofold appeal, with international brands keen to access China’s massive and growing middle class welcomed alongside local brands looking to make a name for themselves.

Jimmy Choo, the man whose bespoke footwear business in London’s East End was parlayed into a company that sold last year to Michael Kors Ltd. for $1.2 billion, was in town to show his new wedding dress brand The Atelier Couture.

“Shanghai Fashion Week and some other fashion weeks are very strong because of the fashionable nature of consumers in Asia. Fashion is so much about young people and the energy of young people and that is something very obvious in Asia,” the Malaysian-born Choo said.

Unlike the more insular markets of Japan and South Korea, where the region’s other two major fashion weeks have been hosted over the past fortnight, Shanghai and the Chinese designers it champions seem more outward-looking. Like the country itself, which has seen its economic rise accompanied by an increase in its geo-political, trade and cultural profile on the world stage, Shanghai Fashion Week is looking to take its place at the center of world fashion, driven by the buying power of the local consumer and the rise of a coterie of young, up-and-coming, homegrown designers.

“Their collections are creative, original and less influenced by overseas designers. In addition, the fashion crowd in Shanghai [is] quite advanced. They are experimental, fun and very interesting to watch.”

“We started out at Shanghai Fashion Week for our debut collection and then we got the chance to show at London Fashion Week men’s and now we are back in Shanghai. We find Shanghai to be really open…you can try to do something different here, whatever you can imagine,” cofounder Yushan Lu said.

The shows in Shanghai are split into three distinct platforms, with traditional catwalk events by more established (and often, though not necessarily, more commercial) brands taking place in the main tents, ensconced in a park within the luxury fashion and retail precinct of Xintiandi. Nearby, the Labelhood platform for emerging designers hosted four days of talent who could elect to show collections in a more flexible “presentation” format of their own choosing. Meanwhile, in Jing’An District, one of Shanghai’s newest luxury malls, Taikoo Hui, played host to the Shanghai International Fashion Showcase, which this season presented shows from Damir Doma and Mexican designer Gregorio Sanchez.

“The biggest thing is about the reach. I showed once at Berlin Fashion Week and to be honest, although you catch the German press, that is the extent of the reach; it makes a big difference to show in Milan or Paris,” Doma said, prior to the re-showing of his fall collection, which first showed in Milan back in February.

“Here, I have the advantage of being able to promote my work in the Chinese market. We opened a shop here two weeks ago and we want to offer some support for that in the market.”

Show highlights included the most accomplished outing yet from the nerd-chic ShuShu/Tong label; an augmented reality show viewed using mobile phones at Sirloin, where the comfort and construction of underwear is given pride of place as outerwear and, according to the show notes: “Puffers are the new fur.”

Puffers were certainly ubiquitous, in exaggerated sizes and colors at Feng Chen Wang, a brand known for its outerwear, in metallic technicolor at Angus Chiang and deconstructed on the Sirloin runway.

Designer Zhang Na showed a combination of her two brands, the sustainable Re-clothing Bank and main line, Fake Natoo, in a moving show that saw real people walk the runway with their life stories flashing on a big screen behind them. In the normally stoney-faced front row, tears fell as voiceovers recounted the trials and tribulations of the “models.”

Shenzhen-based Ffixxed Studios once again had a strong season, further cementing its reputation for modern lifestyle dressing that is comfortable, stylish and largely genderless, and the celebrity quotient was high with shows from Anirac, Hong Kong actress Carina Lau’s brand, as well as the unveiling of a collaboration between pop star Bibi Zhou, stylist to the stars, Lucia Liu and streetwear brand Pony.

At showrooms running concurrent to the show schedule, including Mode Shanghai (which is organized by Shanghai Fashion Week), DFO, Coda, Tube, Not and OnTimeShow, the timing of the event, which moved two weeks forward in the calendar in order to accommodate requests from brands who found it difficult to fulfil orders placed in April, seemed to have had a positive impact on business.

“I think everyone wanted it to be earlier, production and delivery is a fact of life for the brands, when they finish at Paris Fashion Week that is supposed to be the deadline to go into production, then they have to wait for another fashion week to collect orders and go into production. The earlier the better,” Echo Zhuang said.

“I came because I was seeing so many cool Chinese brands in Paris and in London and I thought, wow, if this is what I can see here, I wonder what else is in Shanghai,” she said.

“At the trade shows so many brands are represented and each trade show has its own DNA and speaks to a different customer, so there’s definitely a lot of opportunity.”

“We went to Mode, so many good brands in there, actually, that I am going to get in touch with. So many options and a lot of new brands in there that I haven’t seen before. When you go to Paris and Milan and all the same places, you see the same stuff, so it’s cool to come here and see something different,” she said.

Alongside the fashion and the business of Shanghai Fashion Week, the organizing committee also held a forum called “The Living Room.” The series of panel discussions, which featured experts from the fashion industry in China and abroad, was at least in part a reflection of Shanghai Fashion Week’s attempt to cement its place in the global fashion firmament and, as part of that, form an identity unique to the city and China more broadly.

“The question of identity remains incredibly important. It seems to me that there is a strategy for each city to develop its own identity, but there is also an element of the soul or essence of the city imposing itself on the identity of the fashion week organically,” said Pascal Morand, executive president of the Fédération de la Haute Couture et de la Mode.

“In a way, it needs to be coherent with the soul of the place, and if you look at the most important fashion weeks, they combine the spirit and history of the place with a modern sensibility, it’s true for London, it’s true for Milan. For Shanghai, it’s a focus, you can see they have very good foundation and strategy.”

Recalling an interview with a television station in London 20 years ago, in which he predicted the rise of China as a luxury fashion market, Jimmy Choo was once again confident in backing China as a future fashion powerhouse.

“In 10 years’ time, I can see that the fashion will continue to get stronger and stronger and I say that because young, talented students are studying at the best fashion schools in the world and learning all these things and coming back here to put that knowledge into practice,” he said.

“All the international brands will want to come and join Shanghai Fashion Week as well, I feel very confident in saying this.”