Shamouelian has an unusual retail strategy intended to quickly establish an international network of licensed stores for Sharagano. 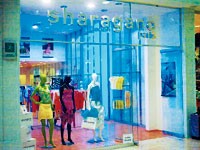 NEW YORK — At Sharagano, “everything is about novelty,” said David Shamouelian, one of the contemporary brand’s owners. And he’s not just referring to the company’s gypsy skirts or trendy cell phone cases.

This story first appeared in the July 15, 2004 issue of WWD. Subscribe Today.

From its design and production facilities in Paris, the $35 million privately held company picks up on European trends and churns out 100 styles a month. Lately, there’s been a lot of gypsy skirts, tie-dyed tops and day-into-evening viscose jersey dresses. The newest item: “trendy” cell phone cases co-designed with Cellective Cases. “With cell phone cases, there’s nothing other than basics out there,’’ he said. “The fashion is missing.”

What’s not missing at Sharagano is designs for growth. There has been a battery of strategies launched in the past few months, in addition to the program for lining up retail partners to operate Sharagano stores.

The company recently started a costume jewelry and dress division for fall selling, and a jeans division that will launch for spring. JMB Design Apparel Group is creating Sharagano contemporary suits for fall, and a Web site for e-commerce is set to operate this month. The company has showrooms here and in Los Angeles and Dallas.

Many fashion firms have grown so fast that they lose control and fail. While acknowledging he’s got a full plate of projects, Shamouelian said the company is profitable, seeks 30 percent growth annually over the next five years and has longevity, having been around for 11 years. Shamouelian is the son-in-law of Rabbi Philip Berg, head of the Kabbalah Centre in L.A., where Madonna, among others, has studied. His partner at Sharagano is Philippe Teman.

While the plan is to rapidly open stores in several parts of the world, none will be owned by the company. That reduces the risk and investment, heightens brand exposure and raises revenue through licensing fees and distribution arrangements. But the potential for profits isn’t as great.

Both freestanding stores and shop-in-shops have opened, and others are in the works. In the first week of June, a 600-square-foot Sharagano location opened in the Galleria store in Seoul through a southeast Asian distribution deal covering Hong Kong, Singapore, Taiwan, Korea, Philippines and Indonesia. The partner is the recently formed Sharagano Asia Pacific Corp.

Last month, Sharagano announced the opening of a second store in Mexico, in Guadalajara. There is already one in Monterrey, Mexico. “We’re projecting five more stores by the end of the year in Mexico,” Shamouelian said. The Mexico distributor is Resplandor y Diseno Sa De CV.

In California, the goal this year is four or five openings, though no leases have been signed. South Coast Plaza in Costa Mesa, as well as Sunset Boulevard, Melrose Avenue, Robertson Boulevard and Rodeo Drive in L.A. are being considered.

On the East Coast, stores operate in the Roosevelt Field Shopping Center in Garden City, N.Y., as well as in SoHo here, both under one license, and there is a unit in Brooklyn under a separate license. There was a shop in Greenwich, Conn., but the lease was sold to another retailer who created a Le Chat shop, which sells Sharagano and other labels such as Betsey Johnson. Shamouelian said the lease sale was too good to resist. Twenty-five to 30 shops might be operating by the end of this year in different countries, and in three years more than 120 with about 60 percent of locations seen as freestanding, and 40 percent in-store shops. It’s a strategy to catch up with other contemporary designers, such as Betsey Johnson, BCBG and Bebe, which already have retail chains.

With all the additional retail square footage, there is the potential for cannibalizing the wholesale business. Sharagano is sold at stores such as Bloomingdale’s, Macy’s, Saks Fifth Avenue, Neiman Marcus and Nordstrom. Shamouelian said at the Roosevelt Field Shopping Center, for example, there is a 1,200-square-foot Sharagano store in the mall that co-exists with a 300-square-foot shop at Bloomingdale’s.

“Each department store that sells our collection offers 10 to 15 styles on average, whereas our own stores offer 100 different styles,” Shamouelian said. “It works.”