Sharing Life on the Edge

NEW YORK — Instead of just posing for Eddie Bauer’s current advertising campaign, Jim Whittaker, the first American to climb Mount Everest, has been sharing details of his momentous life with outdoor enthusiasts. 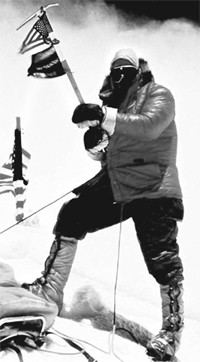 NEW YORK — Instead of just posing for Eddie Bauer’s current advertising campaign, Jim Whittaker, the first American to climb Mount Everest, has been sharing details of his momentous life with outdoor enthusiasts.

This story first appeared in the November 20, 2003 issue of WWD. Subscribe Today.

On Tuesday, the 74-year-old wrapped up a five-city speaking tour of Eddie Bauer stores, a brand he wore on his historic summit in 1963. Whittaker, who also appears in Eddie Bauer print ads running in various magazines this month, said there have been some laughs along the way.

“Someone said to me, ‘I read about you in my history book. I thought you were dead,’” he chuckled.

During his stop earlier this month at the company’s Lincoln Square store here, Whittaker noted how shortly before the climb he approached the company’s namesake, who was a friend and ran a Seattle sporting goods store, about developing a goose-filled down jacket for the trek. (Bauer had first received a patent for a down coat in 1936.)

“After months of tinkering,” Bauer designed the quilted jacket Whittaker wore to the 29,028-foot peak, he said. “Those parkas kept four climbers alive,” referring to threat of hypothermia.

Whittaker’s team consisted of 19 Americans, 37 sherpas and 907 porters who carried 24 tons of equipment and lived on the mountain for four months. They walked 185 miles — 125 miles more than today’s climbers who shorten the trek by flying into base camp at 17,500 feet. It took one month to walk in, since Whittaker and a few others had to go ahead to make sure the route was secure and then go back to get the others and the supplies.

“We figured we climbed the mountain twice,” he said.

Jake Breitenbach, a 27-year-old member of the team, was killed when a wall of ice collapsed on the second day on the mountain. After that, some feared for their safety and retreated to base camp to pitch in. But the loss motivated others “to get the mountain for Jake,” Whittaker said.

As for why someone would want to tackle Everest to begin with, he said, “You’ve got to see if you can do it. That’s the main thing.”

That commitment calls for surviving 50 mph winds, temperatures of minus 35 degrees Fahrenheit, bottled oxygen and breakfasts of hot liquid Jello.

Their efforts earned them the Hubbard award and a visit to the White House with President John F. Kennedy. Five months later, Kennedy was assassinated and shortly after that the Canadian government named its highest peak after him.

After Whittaker got the go-ahead to lead the first team up Mount Kennedy, he got a call from Mel Grosvenor, National Geographic’s president at that time, asking him to take someone along, that person being Robert Kennedy. Whittaker obliged, even though it would be the first ascent and Kennedy had never climbed a mountain.

Whittaker said he called Kennedy a few weeks later to see how his training was coming along.

“He told me, ‘I’m racing up and down stairs practicing crying, ‘Help!’” Whittaker said. “I thought, ‘Oh brother, this is going to be fun. A senator from New York — give me a break.’”

But Kennedy proved to be exceptionally fit. While on snowshoes crossing crevasses covered with snow bridges, Whittaker said Kennedy was so close behind him, he could hear Kennedy breathing on the back of his neck. Whittaker told Kennedy, who was on snowshoes for the first time in his life, to shorten the slack in the rope to avoid sending them both on a ride should the snow bridge collapse.

“OK Jim, but could you speed it up a little bit?” Kennedy asked. They did and soared up the mountain, Whittaker said.

That experience led to a close friendship with Kennedy. Whittaker served as his campaign chairman in Seattle and later as a pall bearer at his funeral in 1968.

Whittaker’s lofty pursuits stemmed from a fairly humble beginning. Growing up in Seattle, he and twin brother Louis started climbing with the Boy Scouts and later graduated to the Mountaineers Club of Seattle. When military service called during the Korean War, the Whittakers landed a plum assignment at Camp Hale, Colo., home of the 10th Mountain Division. There, they taught skiing and mountaineering to Special Forces troops.

After leaving the service in 1955, he signed on with Recreational Equipment Cooperative, better known today as REI. At that time, Whittaker was the sole full-time employee, managing its Seattle store, which catered to 6,000 members. He logged 25 years at REI, serving as president from 1970 to 1979, and opening its first store in 1972.

Once he left REI, he started Because It’s There, his own outdoor apparel company, but that business venture floundered.

He and wife Dianne Roberts, a climber and freelance photographer, returned to Everest’s base camp earlier this year. They spend most of their time on motivational speaking. His wife provides many of the shots shown in Whittaker’s slide show. They are planning a family trek up Mount Rainier, a 14,410-foot peak Whittaker has climbed 80 times. The trip will celebrate his 75th birthday.