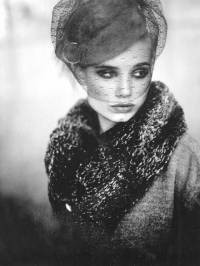 Oval, circular, flat and poofed, in colors ranging from taupe to turquoise, cerise to scarlet, Eia Radosavlijevic’s hats perch like so many sleeping birds on a hallway rack in her Lakeview studio.

She plucked out a red one with a vintage mesh veil, lovingly turning it as she talks.

“I used the block from this hat as the basis for my ‘Suranne’ beret,” she explained, gesturing toward a taupe-colored member of her Fall-Winter 2002 collection. The beret is made from a soft velour felt and is handtooled with a floral folk motif that harkens back to her Estonian heritage.

This companionable combination of contemporary styling with painstaking craftsmanship rooted in Old-World technique is a hallmark of Eia Millinery Design.

Since returning to Chicago (her childhood home) seven years ago, Radosavlijevic has not only established herself as one of the city’s premier hatmakers, but has also done much to further the art of couture millinery.

Although commercial success is a goal, Radosavlijevic’s orientation as an artist means she prefers to sell through trunk shows and private appointments at her home studio, rather than at department stores. “Right now one-of-a-kind product is not a good match for that market — but that’s not to say it couldn’t change,” she said.

First and foremost, Radosavlijevic is a hat ambassador. She co-formed Chicago’s Millinery Arts Alliance — to help local milliners’ marketing efforts — shortly after coming here in 1995. And she has taught dozens of eager fashion students as the hat design instructor at the School of the Art Institute of Chicago.

Radosavlijevic’s training included a degree from New York’s Fashion Institute of Technology, as well as a stint with Balenciaga’s legendary milliner Janine Galimard. “She taught the classic Parisian haute couture techniques,” Radosavlijevic recalled. “and was a huge influence on me. It was all about custom design, fine distinctions and subtleties. Hatmaking as an art, as opposed to mass-produced craft.”

But despite the commitment to perfection, her designs are not without humor. “They may be sophisticated, but they can also be fun,” she said, pointing to a hat with colorful felt strips sewed into varigated spirals, which were inspired by an Austrian artist’s vibrant works. “Actually, I take inspiration from many artists,” she said, “Cezanne, Chagall — even Dr. Seuss.”

Radosavlijevic’s first career — as a ballet dancer in New York — has also been a strong influence in her work. “Hats are all about line and a sense of movement,” she said, “and that’s so much a part of how I was trained to see as a dancer.”

Blocking, or shaping, her hats is an essential part of achieving the lines she’s after. “If the form’s not compelling, no amount of embellishment will improve the end result,” she explained. Radosavlijevic shapes her hats on a combination of imported wooden blocks and forms she carves by hand. Hat materials range from velour felts to vintage straw, glove leather, and even plastics, mesh and wire.

Hats she’s readying for the holidays and spring are “getting more into excess. In this political climate, people have had enough with austerity!”

For example, there’s a new cocktail hat in a glossy black felt trimmed with braiding, meant to perch at a rakish angle on the forehead.”The shape is endearing,” said Radosavlijevic, “but I’m not stopping there.” The finished work will be “just dripping with stuff,” piled high with vintage silk and velvet ribbon and a variety of other trims.

Also for holiday, Eia is working with a crystal mesh fabric from Swarovski, and hopes to do more with leather embellishments for cold-weather wear. “Perhaps some knit leather caps, and some knit wools with hand-tooled leather brims or something.”