Following years of steady sales declines, sheer hosiery remains one of the fashion industry’s most challenging categories. What used to be a staple for women, whether they were working or not, has become a beleaguered sector plagued by years of... 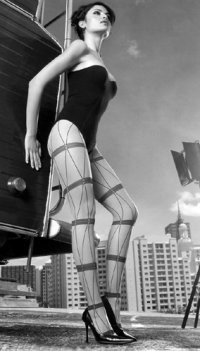 Following years of steady sales declines, sheer hosiery remains one of the fashion industry’s most challenging categories. What used to be a staple for women, whether they were working or not, has become a beleaguered sector plagued by years of fashion trends that shun sheers. The working woman of the Eighties, with her skirtsuit, sheer hosiery, socks, sneakers and pumps, has been replaced by women in trousers and skirts with bare legs, whatever the temperature.

This story first appeared in the March 31, 2003 issue of WWD. Subscribe Today.

Sales of hosiery units plunged 33 percent in 2002 over 2001, marking the steepest drop among all legwear categories, according to marketing information from The NPD Group, Port Washington, N.Y. The number of sheer hosiery units sold fell to 398 million, while total hosiery unit sales for women fell 15.4 percent to 1.22 billion.

The decline comes as stores throughout the country continue to relocate, and often shrink, their hosiery departments to make space for better-performing categories, often accessories. Among the New York stores that have moved their departments recently are Bloomingdale’s, Bergdorf Goodman, Saks Fifth Avenue, Macy’s Herald Square and Lord & Taylor.

“I continue to hear from the major department stores that their sheer business is extremely soft,” said Pat McNellis, president of women’s brands at Royce Hosiery Mills, which produces Nine West sheer hosiery under license. “The best thing we have done lately is to make sure our basics are in stock and that consumers can find the basics that are a staple in her wardrobe. Right now, the business is about satisfying our existing customers. We don’t see a lot of new customers coming into sheers.”

Sheer hosiery also used to be more of a year-round business. However, overall weaker demand has caused the holiday selling period to take on more importance for sheers as women stock up on pantyhose for seasonal parties and events, according to McNellis and other executives.

Nonetheless, legwear in a variety of forms was abundant at the recent designer runway shows in New York and Europe, and many firms are hoping that consumers, too, will return to legwear in coming months.

Mitchell Brown, president of Doris Legwear, said: “We haven’t had this much legwear on the runways in years. Many of the miniskirts and other styles from the Sixties are back, and pantyhose are safe to wear with a mini.”

Among the most important fashion looks in sheers now are support products that massage the leg, as well as smoothing and shaping sheers. Color has been showing up in offerings across the price spectrum, and backseams are also an important trend.

“We are offering more larger sizes, but it’s at the same price and is the same styling,” Brown noted. “We are more inclusive in our sizes.”

According to industry executives and market watchers, among the biggest brands in the sheer arena now are Hanes, Donna Karan, Nine West and Calvin Klein. Brown also said sheer hosiery has seen some strength recently in the private label arena, as many retailers choose to focus on building legwear under their own name, which usually provides higher margins. Other important companies include Wolford and Fogal of Switzerland, which carry higher price tags and more specialized products, including sheers.

Hue, one of the industry’s largest legwear firms, introduced sheer hosiery about two years ago, and currently it has about 2.8 percent of the market share, according to Jody Eskenazi, director of marketing. New styles include shaping products and detail options with novelty details, as well as a fashion category that includes more colors and patterns. While the company doesn’t break out sales of Hue, annual wholesale sales at Kayser-Roth, Hue’s owner, are estimated at about $300 million.

Hanes, meanwhile, is focusing on more shaping products in its sheer and other offerings heading into fall. The company’s Body Enhancers line was introduced last fall and has been a key area of growth, according to Howard Upchurch, president of Sara Lee Hosiery, which includes Hanes and L’eggs.

The company doesn’t break sales of these brands, but industry sources estimate that L’eggs generates an annual volume of about $400 million and Hanes about $360 million.

Sara Lee said in it a recent financial report that unit volumes for sheer hosiery fell 12 percent for the six-month period that ended Dec. 28. The company attributed the decline to “weak market conditions and the discontinuation of low-margin products.” Hanes, which has more than 50 percent of the sheer market share according to market executives, is looking beyond sheers with new additions to Body Enhancers, many of which fall into the realm of innerwear.

“Sheers have had an increase of 14 percent in units sold, and we shipped 9,000 more units in 2002 than in 2001,” she said. “Hosiery is an accessory now, and we think it’s going to be a great fall season based on all the legwear shown at the recent runway shows.”