Shining a Light on Subcontractors

The global supply chain, a key element of international commerce globalization and a vital issue and buzz term of fashion executives, can conjure a somewhat... 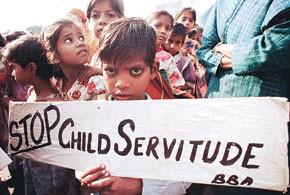 WASHINGTON — The global supply chain, a key element of international commerce globalization and a vital issue and buzz term of fashion executives, can conjure a somewhat misleading image.

That’s because it implies a direct connection between brands and the people making their goods that doesn’t always exist.

Over the past decade or so, the route between factory and store has grown longer, more complicated and sometimes void of oversight, as fashion brands turned production over to outside parties and focused on marketing and design. The missing or invisible links in the chain are unauthorized subcontractors where, unbeknownst to the brands, goods can be made without supervision.

The result for even the most responsible and careful companies can be poor quality, illegal labor conditions, lack of customs compliance and a tarnished brand image that can turn the supply chain into a time bomb.

Just ask Gap Inc., which this fall was the subject of an investigative report that found child laborers making girls’ blouses for the brand in India, in conflict with the company’s policies and despite a system of checks on its suppliers that exceeds the steps taken by many brands.

Exactly how prevalent unauthorized subcontracting is remains an open question, since people breaking rules, not to mention contracts and laws, are generally quiet about it.

Most of the fashion executives contacted by WWD wouldn’t even hazard a guess, though some estimated that 5 to 25 percent of apparel orders placed are made by an unknown subcontractor.

“It probably happens quite a bit,” said Janet Labuda, director of the textiles and apparel policies and programs division at U.S. Customs & Border Protection. “Most of the larger importers have within their contract structure, ‘if you are going to subcontract you have to let us know.’ That often does not happen.”

Part of the problem is that companies cannot be everywhere all the time, she said.

“It can happen to anybody,” she said. “You saw it happen to the Gap and they’re not slouches.”

The dynamic might change next year, once China is no longer restrained by quotas on 34 key apparel and textile categories and more production moves into the country, although some think further restraints will be put on the country’s exports.

“There may be some shifts after Jan. 1,” said Labuda. “Everybody’s trying to continue to compete with China.”

An emphasis on terrorism prevention also has helped shine a light on the global supply network and companies have been paying closer attention, but the industry does not have complete control over the route its goods take from sewing machine to retail floor.

Panjiva Inc., a New York-based firm that helps brands evaluate factories, trolls governmental data for suspicious spikes in production so that companies using its service can follow up. Of the roughly 38,500 suppliers in Panjiva’s database, almost 3 percent, or 1,107 factories, shipped 50 percent more in August, September or October than they had during any previous month. That is a 33 percent increase from a year earlier.

There are legitimate reasons for such a jump in production — new capacity, for instance — but dramatic increases might also be picking up unauthorized subcontracting.

“There are spikes [in production] on a regular basis,” said Josh Green, chief executive officer of Panjiva. “This is a trend that is clearly increasing in terms of frequency.”

Factories secretly farming out work might also be cooking their books in a way that under-reports their shipments to the government.

Brands that trade on their image and the good graces of shoppers can get severely burned by unauthorized subcontractors.

An October report by the Observer, the British newspaper, alleged that children as young as 10 were working in near-slavery conditions producing Gap Kids clothing in New Delhi. The news put the company on the defensive, and Marka Hansen, president of the Gap brand, appeared on ABC News’ “Good Morning America Weekend Edition,” where she said, “This is completely unacceptable and we do not ever, ever condone any child laborer making our garments.”

One of Gap’s approved vendors subcontracted work to a small company to have hand embroidery done in an approved rural center, as opposed to a factory setting, said a company spokeswoman. A portion of the order was sent to an unauthorized makeshift facility in New Delhi where at least one child was seen working on the product, in violation of Gap’s vendor compliance agreement.

The order was canceled, the subcontractor was prohibited from any future Gap production, the vendor was put on probation and had half of its orders suspended for a least six months. The children found at the facility were placed under the care of a nonprofit group and Gap boosted its work with labor groups in the area.

Gap employs 90 people around the world to enforce its codes of conduct in about 2,000 factories worldwide, 200 of which are in India.

“We’ve had our program in place since 1996 and, as we’ve evolved our program, I think we’ve continued to strengthen our ability to find these issues,” said Dan Henkle, senior vice president of social responsibility at Gap. “It’s not happening as frequently.”

Henkle said cooperation with factories, other brands and nonprofit groups can help reduce unauthorized subcontracting and other violations.

“The more that we align as an industry, the more cohesive and understandable these efforts are to suppliers, who really are trying to work with all these different buyers,” he said. “We don’t believe that monitoring in and of itself is enough. We have invested a lot of time really in developing relationships with stakeholders.”

Corporate compliance programs, while not universal in the industry, have become standard for big brands and feature inspectors and strict workplace rules governing hours, wages and conditions.

If a secret subcontractor is not detected, however, that factory will never be visited by a brand’s compliance team.

“There’s a tremendous concern that all the codes of conduct in the world mean nothing if you haven’t been in that factory,” said Brenda Jacobs, a trade attorney with the Sidley Austin LLP law firm, who also is main counsel for the U.S. Association of Importers of Textiles & Apparel.

Subcontracting, some of it authorized and above board, ebbs and flows.

“More responsible companies that are concerned about where their goods are being made have taken steps over the years to be more knowledgeable about their supply chain,” said Mark Jaeger, senior vice president and general counsel at Jockey International Inc. “You can keep it under control, but you can’t guarantee it doesn’t happen.”

Not all brands are as likely to get burned by unauthorized subcontracting. Companies paying closer attention to their factories would be less likely to be fooled, and size and resources also play a part.

“The level of risk depends upon your volume and the factories that you go to, their capabilities,” said Joe McConnell, senior vice president of operations at innerwear producer Biflex Intimates LLC. “It is less a risk for someone like us than for smaller companies, where they might be one of a number of companies at a factory.”

Smaller vendors also have less wherewithal to check up on their factories, but are still subject to the demands of ever-more-competitive retailers.

“Because there’s a lot of pressure for quick turn and there’s a short window to produce the goods, you could see factories subcontracting to make the shorter window,” said McConnell.

One sourcing expert likened the factories’ modus operandi to that of the airlines, which overbook flights to ensure they have full planes. Factories also overbook and if all the orders come in, some farm out the work and present it on as their own.

“In the real world, you’re not supposed to subcon[tract] and that’s just the way it should be, but it’s not what actually happens,” said the sourcing expert, who spoke anonymously given the sensitive nature of the issue.

“The minute you get out of a regulated environment, anything goes and it all becomes about price,” he said. “As customers are getting more concerned and buyers are getting smarter, they’re tightening the screws. But to say it doesn’t go on anymore is ludicrous.”

Unauthorized subcontracting is the result of not only unscrupulous factory owners, but also the seasonal nature of the fashion business, with a rush of orders before key selling seasons, said Kevin Thomas, director of advocacy at the Maquila Solidarity Network, a labor rights watchdog group.

Brands, said Thomas, can address the issue by auditing factories for capacity and spacing out their own orders as much as possible so the factories can sustain their workforce.

“The bigger brands have been consolidating some of their production with larger manufacturers,” he said. “In one sense, that’s a positive development because you can have more control.”

This also leads to an hour-glass structure, with larger brands dealing with larger factories.

“They may actually be getting even less control over what subcontracting is happening,” said Thomas. “The fewer intermediaries, the more control you have.”