Shopbop.com has some exclusive ideas. The online contemporary retailer has picked up steam since being acquired by Amazon.com last February. It has increased its offerings of sportswear and will be the exclusive online retailer carrying Helmut Lang in... 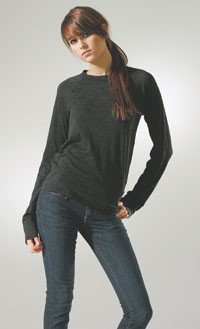 Shopbop.com has some exclusive ideas.

The online contemporary retailer has picked up steam since being acquired by Amazon.com last February. It has increased its offerings of sportswear and will be the exclusive online retailer carrying Helmut Lang in the spring. It also plans to continue to increase its mix in accessories, most recently commissioning jewelry designer Rachel Leigh to create a jewelry line to go with Alison Kelly’s sportswear label Dahl, another exclusive to Shopbop. Kelly, a 25-year-old Brooklyn, N.Y., native, was a contestant on “Project Runway” in its third season. Her line will hit the site in February.

Also going live next month is a line of private label weekend wear called Bop Basics. Bop Basics cotton pieces, an array of tanks, T-shirts, hoodies, track jackets and yoga pants, will retail from $34 to $88. Most other merchandise on the site is priced higher; James Perse ranges from $35 to $200 and Ella Moss retails from $60 to $220.

“We’ve wanted to do a line like this for a long time, but thought it was a good thing to wait until we were established in the market,” explained Erin Crandall, head buyer at Shopbop. “The line consists of everything that people just want to wear. It’s soft, comfortable, and we really worked hard to make the fit great. These pieces are going to be staples for our customers, and will be great to increase our margins.”

Crandall said the collection is similar to James Perse, but doesn’t directly compete with any of the site’s current vendors. Bob Lamey, founder and chief executive officer of Shopbop, said Bop Basics fills a void for the e-tailer.

“We are filling in the gap with this line,” he said. “We feel that we offer the best of the best on our site, a well-edited mix of what’s hot right now. So with Bop Basics, we feel we are offering the best in basics. I didn’t want to do a line like this just so we could say we have a private label line. I wanted to make sure we took the time to make it great.”

The company will introduce a site-within-a-site concept that executives call Salon. Salon, being launched for fall, will offer higher-end designer products. While brands on the site haven’t been confirmed, Crandall said Salon was targeting six or seven designers for the first season.

This story first appeared in the January 4, 2007 issue of WWD. Subscribe Today.

“This will be a special part of the site where customers can learn about the designers by reading their bios, or hear exclusive information about them,” Lamey explained. “We want the customers to feel like they are going to another floor of the store, similar to shopping on another floor at Bergdorf.”

Lamey said all the changes in the site would help to round out Shopbop.

“Being acquired gave us the opportunity to grow faster than we would have been able to alone. It also gave us the chance to offer small changes that mean a lot to our customers, like free ground shipping,” he said. “While our business has grown each year, we expect triple-digit increases with these new things.”

Shopbop.com is based in Madison, Wis. Lamey started the company with a freestanding store in Madison in September 1999 and two months later added the Web site. Today, Shopbop.com carries a range of products from designers Catherine Malandrino, Norma Kamali, L.A.M.B, Mike & Chris and Diane von Furstenberg. Soon it will add lines from Twinkle, Anlo and Stacey Lapidus.