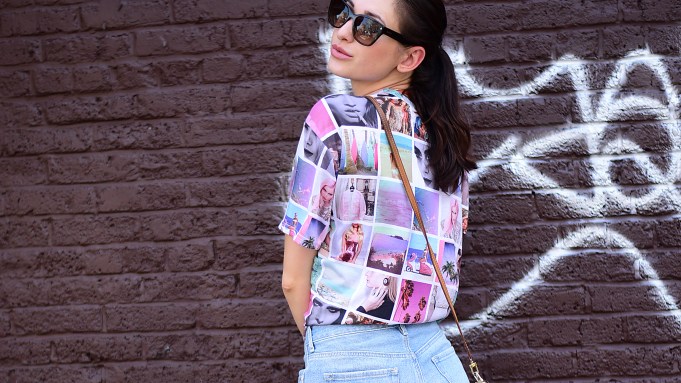 Thirty-odd years after Nair, maker of depilatory products, posed the question with its catchy TV jingle in the Eighties (borrowing the lyrics from “Short Shorts,” the 1957 song by The Royal Teens), it’s more relevant than ever.

No matter what you call them — daisy dukes, cheekies, tap shorts, cut-offs, HotPants — barely there shorts continue to rule the streets, with their inseams shrinking as temperatures rise. Gluteus maximus, indeed. (Actually, the lower posterior is more specifically referred to as the underbutt, a term that emerged a few years ago as the trend became more and more ubiquitous.)

On a few recent sweltering afternoons in Manhattan and Brooklyn, WWD documented microscopic short shorts on women of all ages, many of whom worked the camera to show off their toned legs and derrieres in shorts paired with T-shirts and tanks. Wearing less when the heat rises is not exactly revolutionary, but is warm weather really all that’s behind — pun intended — the ultrashort-shorts trend?

Celebrity stylist Christian Classen, who worked with Kate Young before stepping out on his own as Selena Gomez’s stylist and the fashion director for her 2016 “Revival” tour, said warm climates are only part of the story. He thinks athletic streetwear — of the Vetements, Tory Sport, Alexander Wang and Y-Project variety — is also driving the trend. There’s also the Instagram-fueled culture of image and self-obsession. The shorter the shorts, the more looks (and likes.)

“Daisy dukes are a department store staple, but the silhouettes are changing this season,” Classen said. “Designers are adding more severe slits to the sides and rounding the shape, similar to the ‘dolphin’ short that was popular in the Eighties. Think Hooters waitresses, or every other girl on Instagram posting their summer #beachbod pictures.”

Joe Zee echoed the impact of social media on the trend. “I think if you were to ask all of these young girls why they do wear [short shorts], they’ll tell you it’s just another item in their closet,” Zee said. “Have they become desensitized by the overt sexiness of these short shorts? Probably, but that’s what happens in an Instagram generation. The more you see it everywhere — and by everywhere, I mean online and in [Instagram] feeds — the less you think about it. And it just becomes a staple.”

During WWD’s shorts-scouting session, those wearing the shortest styles appeared to be in their teens and early 20s. No wonder: Millennial retailers such as American Eagle Outfitters and Abercrombie & Fitch cater to the trend with a wide range of “midi,” “shortie” or “festival” shorts in varying colors, washes and fabrics, some designed with exposed pockets and lace trim. “Like everything in fashion, there will be a moment for other styles, but I think short shorts will always be a go-to,” said Lisa Lowman, senior vice president of design at Hollister. “[They are] a staple in our girl’s closet.”

“I only wear them in the dead of summer,” said Rana Good, a 31-year-old journalist spotted in SoHo, of her orange Wildfox shorts decorated in flower appliqués. “I usually wear a big T-shirt with them so I don’t feel quite as undressed.”

Cara Sheffler, a 33-year-old freelance writer, favored a short pair in pastel and metallic brocade designed by Rachel Comey. “When I wear them, I feel like a back-up dancer for Prince strutting to ‘Little Red Corvette,’” she said.

Several styles by Australian label One Teaspoon are effectively denim underwear. The brand, described as “fantastically rebellious” and “sex-infused” on its web site, was founded in 2000 by Jamie Blakey and has a celebrity following among Gigi Hadid, Kate Moss and Chrissy Teigen. A recent paparazzi shot of Kendall Jenner wearing a pair of One Teaspoon’s black leather “Bandit” shorts in New York City garnered about 4,000 likes on the label’s Instagram account, @oneteaspoon_, which has 446,000 followers and counting.

British e-tailer Asos categorizes their shorties as “knicker” shorts, many cut with high waists and virtually nonexistent inseams. “Our high-waisted stretch short in both main and petite ranges is particularly popular,” said Vanessa Spence, the e-tailer’s women’s design director, who cited culottes, pleated and lace-trim shorts as top sellers. “They are a key component to our twentysomethings’ wardrobes.” For now, at least. Spence forecast a move toward chinos and longer-line styles for next spring and summer.

If the look is inherently young, Neiman Marcus’ Ken Downing doesn’t put an age limit on it. “Short shorts are not about age; they’re about legs,” he said, noting that styles by Rag & Bone and Frame Denim are customer favorites. The Neiman’s senior vice president and fashion director said that it’s indisputably a moment for shockingly short shorts, and no matter how small they get, he doesn’t see the trend disappearing. “I never say never — what goes up, eventually comes down,” said Downing. “But it would be a surprise if the city short returned after the current excitement the short short is experiencing.”

“I would say younger girls are more brazen when it comes to shorts, but we have plenty of women in their thirties and up who aren’t intimidated by a nicely cut short,” said Niko Liakaris, store manager at Moschino’s SoHo store. “If it’s 95 degrees and humid, our girls are going to wear what they want.” For spring, Moschino’s printed silk and cotton shorts, including a pair from its Powerpuff Girls collaboration with Cartoon Network, were standouts. For evening, the brand also offered a black sequined tuxedo short with a tulle overlay.

Short shorts typically have inseams up to three-inches; midlength shorts go up to five-inch inseams, and bermudas, or city shorts, hit just above the knee with inseams measuring up to about 13 inches.

Los Angeles-based denim brand Siwy is known to design some of the shortest pairs around: Their best-selling Camilla cut-offs have a two-inch inseam, and the Cher short measures in at a mere one-and-a-half-inch inseam. Practically chaste in comparison is the recently introduced Blondie, a low-rise style with a frayed hem and two-and-a-half-inch inseam.

“Our Camilla short has been around the longest and has a great track record among our fans,” said Jimmy Taverniti, Siwy’s creative director, noting that shorts accounted for 50 to 70 percent of sales for the past three summers. “I don’t think denim shorts will ever go out of style. Being California-based, where every season is shorts season, we will always have denim shorts in our collections.”

Vintage denim is particularly prime for the trend and has earned cache as the cool girl’s short short. No one’s cornered that market like Re/done, the Los Angeles-based brand with a cultlike following founded in 2014 by Sean Barron and Jamie Mazur. Re/done, which sources and reconstructs vintage Levi’s, started offering shorts a year after launching. “Ours are not ‘cheekies,’” said Barron. “That’s out of our girls’ zone. Ours are a half-inch longer than a ‘cheekie’ would be.” A quick perusal of Re/done’s e-commerce offering found inseams as short as 1.4 inches, but the fit is easy and relaxed as opposed to tight and overtly sexy.

The appetite for Re/done’s somewhat limited supplies remains stoked: Barron said there’s currently a 500-person wait list for shorts at shopredone.com. And while cut-offs might seem like a seasonal business, Barron insists it’s a key category for Re/done year-round. “Right now, we’re blowing them out,” he said. “Our smart retailers are on board with that and they just buy [our shorts] all the way through September and October.”

Trend and weather-wise, this moon cycle is far from over.