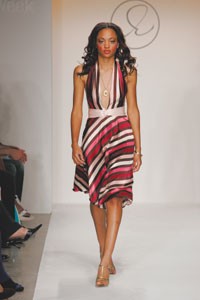 Yana K: The parade of Seventies-looking sirens at Yana K wore sexy, high-waisted trousers and fluorescent go-go dresses, making for a fun, ultrafeminine collection. At times, though, the looks seemed random, as in the embroidered silk cheongsam.

Anthony Franco: Making a jump from costume design back into ready-to-wear, Anthony Franco showed a collection that mixed wonderfully tailored tuxedos and suits with Vegas showgirl-esque dresses that were downright gaudy.

Desanka: There’s something to be said for clothes that are both trendy and distinctive. Desanka Fasiska worked both elements with slouchy dresses and draped cargo skirts, but she could have done without the pile-it-on styling.

Sheri Bodell: Flesh was the order of the day at Sheri Bodell, from her color palette to front-row guest Tommy Lee and his barely dressed groupies. As for the clothes, there were flirty silk dresses and shorts suits detailed with fringe, embroidery or metal rings.

Oligo Tissew by Kristopher Enuke: Kristopher Enuke showed a lineup of navy and black linen trenches with mandarin-style collars, and his signature star-pocket jeans, this time in red.