Shot of Support: Gen Art Celebrates a Decade With Help From Botox 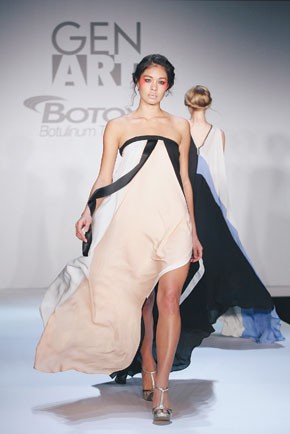 At New York’s Hammerstein Ballroom on Monday night, all of those elements came together to mark the 10th anniversary of Gen Art’s Styles competition, which has given more than $300,000 to emerging designers since its inception. Alums include Peter Som and Rodarte sisters Kate and Laura Mulleavy. This year’s $35,000 in awards, handed out to 30 finalists competing in six categories, came courtesy of a bevy of sponsors, including the event’s main backer, Botox.

The sponsorship was meant to create awareness about Botox’s alternate use in combating hyperhidrosis, or excessive sweating. To that end, gift bags included umbrellas and paper fans; there was an information booth — manned by dermatologist Marina Peredo — where guests could fill out an “Excessive Underarm Sweating Survey” and vie for a complimentary consultation.

As for the show itself, five designers took home Botox Design Vision Awards. Yujin Song nabbed the ready-to-wear honor for her sci-fi-inspired dresses; Marie Potesta won the avant-garde award for her patchwork two-tone knits, and Louisa Parris the eveningwear accolade for her breezy flyaway gowns. Ninaki Priddy and Timothy Franklin, meanwhile, won in the categories of accessories and men’s wear, respectively.

Then there was Joel Diaz of Jolibe, who garnered a $10,000 prize for best displaying the theme of “radiance” in a series of fashion sketches. The inspiration behind that rather unusual topic was a sponsor, of course. That particular prize was dubbed the Tone Skincare Fashion Award for Radiance (because beauty products and the idea of radiance go hand in hand, naturally). Host Robert Verdi couldn’t help but crack a joke here. “That doesn’t sound like a product placement award at all,” he said. Even the judges — who included Elettra Wiedemann, Victoria Bartlett, Douglas Hannant, Alexis Bittar, Carlos Falchi and Saks Fifth Avenue’s Michael Fink — couldn’t hold back a few chuckles.

But with thousands of dollars being funneled into new designer talent, is a fashion runway-turned-one big commercial break so bad? “It’s art and commerce,” said Gen Art fashion director Lee Trimble. This year, the winners are getting more than just an influx of cash. L.A. production company The Evans Group will provide sample development and production services to the men’s wear and rtw designers; the latter will also get complimentary booth space at the next Designers & Agents show.