Members from Ralph Lauren to Oscar de la Renta, Vera Wang and Carolina Herrera will take their seats in one of the private dining rooms on the fourth floor for a lunch and a meeting to discuss the Council's current issues. 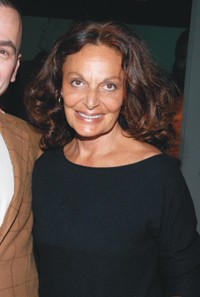 That is sure to be the burning question on every pair of fashion lips today, as the race for the next president of the Council of Fashion Designers of America comes down to the wire. At 12:30 p.m., the black town cars are expected to drive up to the Condé Nast Publications headquarters on Times Square, where the board meeting is to take place.

Members from Ralph Lauren to Oscar de la Renta, Vera Wang and Carolina Herrera will take their seats in one of the private dining rooms on the fourth floor for a lunch and a meeting to discuss the Council’s current issues — not the least of which will be a vote for the first time in 15 years for the Council’s next president, to succeed Stan Herman. Their choice is between Diane von Furstenberg and Joseph Abboud.

The race between the two strong-willed but very different contenders has become the topic du jour of the summer. There has been much gossip of aggressive lobbying tactics, with each contender taking very different routes to secure a win; a touch of controversy with Anna Wintour’s very public endorsement of von Furstenberg, and constant analysis of the board members and which candidate they’re likely to go for. It’s a race that some fashion types have likened to the 2000 Bush/Gore nail-biter — sources have speculated that the result could hinge on a mere one or two swing votes.

The election will determine who will hold one of the most high-profile jobs in American fashion for the next two years, with the possibility of being reelected for an additional two-year term then, since presidency rules were changed to a four-year limit last year.

The common consensus is that von Furstenberg could bring a high glamour quotient to the CFDA, as well as some of the most powerful connections in fashion, entertainment and the international jet set, while Abboud, whose profile has risen as a frequent on-air visitor to the “Imus in the Morning” radio and cable show, is considered to be not only driven, but available, since he has little involvement in his men’s wear business.

The next CFDA president will not just be a figurehead, but will also work in tandem with executive director Steven Kolb on developing funds, scholarship programs, charitable endeavors and the recently launched anti-piracy initiative. The winner will also have a mandate to galvanize America’s fashion community and funnel the disparate voices — and egos — into one cohesive message.

This story first appeared in the July 17, 2006 issue of WWD. Subscribe Today.

The two will certainly have their moment to shine today. Herman is expected to run the board meeting, which will start by ratifying 19 new CFDA members. Following that process, Herman will invite von Furstenberg and Abboud to each make their case to the board for 10 minutes, during which the competitor will leave the room. Once this is completed, the contenders will remain outside to give the board a chance to discuss them. Each board member, including von Furstenberg and Abboud, will vote in a secret ballot. Kolb and CFDA attorney Jack Hassid will tabulate the votes, and should there be a 13-13 tie, there will be re-votes until a winner is determined. Once that has been achieved, Herman will announce his successor.

Key members of the fashion industry have very clear ideas as to the qualities they would like the next president to possess.

Reed Krakoff, president and executive creative director of Coach and a CFDA board member, said the president should be “someone who can be a public figure and really embrace a vision for the CFDA, and galvanize the industry around the organization. It has to be a powerful figure, passionate, respected and admired. [We need] someone who has experience in the industry, and can pick up the phone and work on the important issues.”

Cynthia Rowley said, “The new CFDA president should be a mix of Eleanor Lambert and Kofi Annan — the perfect combination of charisma and diplomacy.”