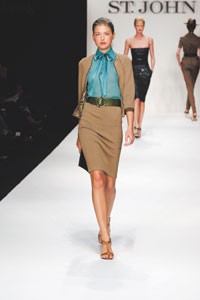 St. John: Despite the rumors, Angelina Jolie didn’t appear. But the clothes were news enough at St. John’s Thursday night show. The firm declared its intent to attract a new generation of customers while not straying too far from its traditional clientele. There were finer, lighter knits than usual, such as a candy-striped bolero and an earth-toned poncho over swim briefs, and even the heavy gold buttons were gone in favor of a lighter, sexier look, such as gold-rimmed, pearlized buttons on skinny, double-pocket suit jackets. And the strapless black gown had just enough sparkle, eschewing the heavy paillette coverage of yesteryear. The company showed woven separates for the first time: tailored safari shirts, a cotton shirtdress and a trenchcoat shown in cotton khaki or black or olive taffeta that had retailers and customers pining for their own after the show.

Oddly, despite the success of the show, designer Tim Gardner, who has been consulting with St. John and was responsible for its latest look, didn’t take a bow. Asked about Gardner’s fate with the company, chief executive officer Richard Cohen only indicated that a “brand new” designer will be announced in a month. In support of Cohen, his friend, Domenico de Sole, flew in from New York with his wife and daughter. And Kelly Gray — the sole representative from the family — thoroughly enjoyed the show and her moment in the front-row spotlight. “It’s refreshing,” she said. “It makes me remember what clothes are like. I’ve been living in Gap for the last few months, riding my horses and ballroom dancing.” As for the rush of reporters clamoring to speak to her, she said, “I never got this much attention at one of my shows.”

Bradley Bayou: There was something for everyone on Bradley Bayou’s spring runway. Among the 24 made-to-measure looks, Bayou let his inspiration zigzag through decades and sensibilities, from a frothy Fifties party dress with Swarovski crystals along the waist, to a fierce Matrix-like black gown with a leather corseted bodice. Dizzying, indeed, but Bayou made the wide variety worthwhile, with superluxe fabrics and perfect tailoring (he hired some of Galanos’s former team). Made-to-measure certainly speaks to a rarefied clientele, but Bayou is looking to expand his audience: After the show, the designer announced the launch of a leather and sweater collection called Bradley, which bowed on QVC on Saturday.

Petro Zillia: Designer Nony Tochterman has always divined her own quirky Wonderland, and for her part in Walt Disney’s new “Alice” fashion program — a multicategory, multidesigner collection — she presented clothes that certainly seemed wearable if you took away the heavy makeup and styling. Against a backdrop of humongous mushrooms and flowers, there were pretty white cotton dresses with floral summer coats, a knife-pleat striped skirt with a green chiffon halter trimmed in same-fabric roses and a patchwork-print rib-knit cardigan along with Tweedle twins-type high-waisted pants.

Sue Wong: Sue Wong began her spring show with typical over-the-top theatrics — a Brazilian dancer in a gigantic orange headdress shimmying her way down the runway accompanied by two percussionists. But while in past seasons such an opener would likely have set the tone for the excess to follow, here Wong toned things down to strong effect. Bright, Tibetan-inspired day dresses in baby-doll and sundress silhouettes looked youthful and vibrant and featured simple mirror and embroidery detail. But Wong’s heavy styling showed up in some numbers, such as the floral disaster of a gown with matching parasol and hat.

Saja: Childhood memories and girlish fancy set the mood for Yoo Lee’s spring Saja collection. The designer hit the right notes with cotton baby-doll dresses, pastel-colored striped suits and white knee-high stockings — clothes that recalled years gone by, but still felt wearable, thanks to beautiful, fitted tailoring and pretty pale colors. Yoo also incorporated subtle details, such as covered buttons and delicate beading. A soft yellow, flapper-style camisole paired with relaxed beige metallic linen walking shorts could have been found in grandma’s attic, for instance, but Lee made the combo look right at home on the runway. However, several solid chiffon column gowns in a rainbow of colors, from aqua to tangerine, felt repetitive.