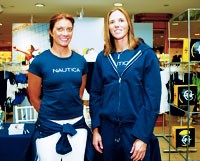 SWIM TIME: Swimwear season has kicked into high gear and stores are getting into the spirit. Last week, Saks Fifth Avenue’s New York flagship held “Swim Week,” a series of events, which included in-store appearances by swimwear legend Anne Cole, as well as representatives from Shoshana, Gottex and La Blanca.

Cole, who has been in the business more than 50 years, said during her visit that her namesake business has been running strong this season, especially in its two-year-old Anne Cole Locker division.

“Color has been doing really well for us, which is great because I hate black,” said Cole who chatted with customers and showed off her spring styles on the store’s eighth floor swimwear department. Cole also revealed that the firm will launch a higher-end line called Anne Cole Studio at the Miami Swim Show in July. She declined to divulge details except to say the new line is designed “for women looking for a lot of glamour.”

Earlier this month, Lord & Taylor held a swim event with Nautica, which included an in-store appearance by professional volleyball players Misty May and Elaine Youngs, both of whom are sponsored by Nautica. The duo, who are rivals on the court, signed autographs and mingled with fans as beach music played in the background and models sported Nautica’s latest swim looks.

“We always wear swimsuits when we play,” noted May. “It’s much more comfortable for us.”

GAP TAKES A SWIM: In other swim news, Gap is testing the waters this season with swimwear, a category that made its debut in late March on the retailer’s Web site and in about 25 GapBody stores. The new collection includes a variety of halter tops, string bikinis and tankinis, as well as boyshort and high-cut bottoms, all of which can be mixed and matched, plus some one-piece options. The suits come in bright colors and some have stripes. “Our customers were looking for swim from us,” said a spokeswoman, who said the line will likely be rolled out to additional GapBody stores. Gap’s online site also has a mix-and-match feature designed to help shoppers find the right tops and bottoms. Prices for the collection are about $24 to $30 each for tops and bottoms, and $38 for a one-piece. Gap, which tested swim in the mid-Nineties, declined to divulge sales projections for the swim line.

NEW SHOWROOM: Apparel and accessories firm Earth Tones Trading Co., based in Columbus, Ohio, has opened a new showroom in Los Angeles in the California Market Center. The company, a division of Impulse Wear, makes accessories and apparel for brands including John Deere, White Castle and Lionel Trains, and is on the hunt for new licensees, said Joy Sokol, West Coast sales director for Earth Tones Trading. “We are in an expansion mode and we felt it necessary to open on the West Coast,” Sokol added.