NEW YORK — Before shoe-obsessed Carrie and Miranda from “Sex and the City,” there were New York’s own real-life Kari (Sigerson) and Miranda (Morrison), the two designers behind the cult shoe brand Sigerson Morrison. 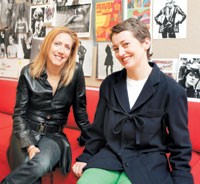 NEW YORK — Before shoe-obsessed Carrie and Miranda from “Sex and the City,” there were New York’s own real-life Kari (Sigerson) and Miranda (Morrison), the two designers behind the cult shoe brand Sigerson Morrison.

In 1990, the duo brought their collection of urban-chic shoes to girls everywhere. Fifteen years later, they’ve added handbags to the mix as well as a diffusion line called Belle. Now a $30 million company, Sigerson Morrison is hoping to attract investors to help it grow beyond what the brand’s two founders have built.

Sigerson, a Nebraska native, and Morrison, originally from London, met as students at the Fashion Institute of Technology here. They quickly built a rapport.

“Everyone else in the class was out of high school,” Sigerson said. “Miranda and I were the only ones who had come great distances and we were in our late 20s and more grown-up.”

After graduation, the two paired up and worked out of a studio, where they handmade shoes for wealthy private clients. But soon the production became too much work for too little money, and both designers were dissatisfied.

“Miranda had a bigger approach to things,” Sigerson said. “So she said, ‘We can do this for real. We can do a collection and build stores.’”

“I may have been more foolishly optimistic,” Morrison countered.

Nevertheless, Sigerson and Morrison started wholesaling their brand and soon became known for their soft leathers in saturated colors and chic city styling.

In 1995, they opened their first store on Mott Street in NoLIta. Sigerson Morrison was one of the first established fashion companies to set up shop in the Manhattan neighborhood and is credited by some with jump-starting the area.

“It was ripe to be discovered,” said Sigerson, who lived in the area at the time and knew about the daily operations of retail from working in boutiques over the years.

In 1999, Sigerson Morrison added a boutique in London on hip Westbourne Grove, but the store closed three years later.

As the company garnered a reputation for its must-have motorcycle boots, kitten-heeled polkadot mules and perforated skimmers, shoppers flocked to the tiny store, as well as to retailers that carried the brand worldwide. In the summer of 2003, Sigerson Morrison offered a rubber kitten-heeled flip-flop in a rainbow of shades. It became an instant success and was just as quickly imitated by other vendors.

Sigerson Morrison had patented the shoe, but didn’t have the funds to take legal action against all the copycats.

“We would have been much better off spending the money not on the patent, although I’m very pleased to own it, but on figuring out how to distribute the things quicker with more volume,” said Morrison, “which is how we’re approaching the Rain and Shine program.”

Rain and Shine is another rubber shoe group that includes a lace-up flat and a spectator boot style. It also will be available in an array of bright colors and begin hitting stores in July.

“In order to remain free to do exactly what we wanted to do with the main line, we created Belle,” Morrison said. “Our expectations and quality and interest evolved, and became increasingly expensive with the exchange rate. But we still had a lot of people asking us for those simple, cheaper things that we used to have so much of.”

Belle is now carried in the Mott Street boutique. The Sigerson Morrison collection moved to a larger location on Prince Street nearby. Two years ago, the company opened shops for Belle and the main line on West Third Street in Los Angeles and in Tokyo through a partnership with Shin-ei Corp.

The Mott Street store was redesigned in 2001 to house the firm’s handbag line. Early on, styles such as the fold-over clutch in metallic leather attracted fans, but now the collection has grown to include pebbled leather saddle bags and a signature bar-top handle bag. Wholesale prices range from $142 to $455.

Handbags account for less than 20 percent of annual sales, but the founders would like to see it grow to at least 30 percent if not 50 percent in the next few years.

To do that, they know they need outside help. As trained designers, not business executives, they feel they’ve taken the brand as far as they can and have begun working with the Avalon Group to find investors.

“We’re a unique company profile,” said Morrison. “There aren’t that many American shoe companies that aren’t attached to a major clothing brand. We’re full of ways to build and expand the brands that we have, but we don’t have the formal training and we don’t have the deepest pockets in the world. We feel like with smart money behind us, we could actually really see the story to the happiest ending.”

Some of the duo’s ideas include Belle concept stores, in-store shops in Europe and advertising and marketing for which there has never been an allotted budget.

“We talk on and off about doing a kids’ line, which we would very much enjoy,” Morrison said. “But within the main line and Belle and bags, there’s still massive room to develop.”