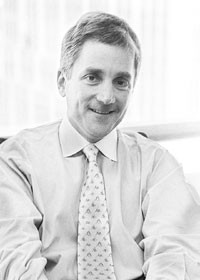 NEW YORK — Jones New York Signature reported sales of $57 million for Jones Apparel Group during the first quarter — its initial foray at retail — indicating the line is on its way to hitting its first-year sales goal at least $200 million.

Signature partially replaces sales lost from a licensing dispute last year with Polo Ralph Lauren Corp., which caused the Lauren by Ralph Lauren line to revert to Polo. The impact of losing the Lauren business, along with other onetime expenses for the three months ended April 3, helped cut profits 22.5 percent compared with last year.

First-quarter income exceeded expectations and Jones raised estimates for the year based on strength in its own stores and wholesale accounts. Jones’ shares increased 3.5 percent or $1.31 Tuesday, closing at $38.52 in New York Stock Exchange trading.

Net income for the New York-based manufacturer, which markets brands that include Jones New York and Nine West, dropped to $94.4 million, or 73 cents a diluted share. Estimates initially called for earnings of 55 cents to 60 cents. A year ago, Jones reported earnings of $121.8 million, or 90 cents. First-quarter sales dipped 1.3 percent to $1.22 billion.

“The business clearly feels better,” chief executive officer Peter Boneparth said on a conference call with analysts. Strong consumer spending and the balancing of “the supply-and-demand equation” across the firm’s businesses have helped, he said. A shift toward more career-oriented dressing also has played into one of Jones’ strengths.

“Suppliers such as Jones can actually thrive in a ‘Goldilocks’ environment — not so hot, not so cold — when costs are controlled and inventory is kept lean,” Lazard Frères equity analyst Todd Slater wrote in a research note.

Operating profit margins during the quarter fell by 360 basis points to 13.3 percent from 16.9 percent a year ago, reflecting the Lauren exit, the noncash purchase accounting effect related to the Kasper A.S.L. acquisition last year and the write-off of costs related to the redemption of some convertible debt.

“It was a quarter in which really almost every division contributed to the party,” Boneparth said. “We see continued signs going into the second quarter that consumer demands remains vibrant.”

Wholesale revenues in the better-priced apparel at Jones fell about 4.5 percent for the quarter. A year ago, Lauren and Ralph by Ralph Lauren, both under license from Polo, pulled in sales of $176 million. Helping to offset the Lauren void, Kasper and Anne Klein, which were included in the Kasper purchase, combined for $109 million in quarterly sales.

Regular-price selling for Signature, which launched for spring, has been strong and the line gained momentum, Boneparth said.

“We remain very committed with our wholesale partners to growing this to a substantially larger opportunity than it currently is today,” he said. Jones is “extremely comfortable” with previous estimates calling for sales of at least $200 million this year, he said.

The Jones New York collection business, which Boneparth said has gone from being one of the sickest to one of the healthiest in the portfolio, has benefited from the dressier trends in the marketplace with more regular-price sales.

Better brands have been energized by the creation and relaunches of several big names, such as Tommy Hilfiger and Calvin Klein. Moderate has been in flux, pressured by private labels and retail weakness. Jones’ wholesale volume of moderate apparel sank 4 percent during the quarter.

“Moderate is in many cases sort of the Rodney Dangerfield — it doesn’t get a lot of respect,” said Boneparth. “Previously, everybody talked about a lot of problems, but what we are seeing is very significant improvement.”

Moderate “inventories are very much more in line than they were,” Boneparth said. “The stores have all acted rationally in terms of getting on stock plan.”

Wholesale sales of footwear and accessories increased 2 percent, with strength in the Nine West and Bandolino footwear brands. A key area of strength was the company’s retail operations, where comparable-store sales jumped 13 percent and overall sales increased 21 percent.

Jones plans to open 45 to 60 retail stores this year and close 30 to 40. Boneparth said the retail operation might grow via acquisition. The company is in a battle to take over Maxwell Shoes Co., which produces AK Anne Klein shoes under license.

Jones acquired Kasper A.S.L. and its Anne Klein businesses in December for $232.5 million.

Analyst Slater said Anne Klein may become a more than billion-dollar brand for the firm over the next few years “as it taps into the rich accessible-luxury vein, following a Coach-like strategy of improved accessory and apparel product, marketing, retail store growth and international penetration.”