The leading geek in HBO’s satire of the California tech scene, “Silicon Valley,” dresses against type.

By Jessica Iredale and Alex Badia on May 8, 2014
View Slideshow 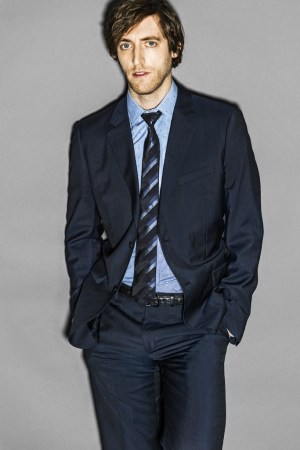 Aftera a solid morning dressed in suits by Prada, Calvin Klein and Z Zegna for a photo shoot, Thomas Middleditch changed back into his flannel shirt, khakis and skate sneakers, an outfit more appropriate for TechCrunch Disrupt at the Manhattan Center in New York City, where he was due for a midday panel Q&A. It was Middleditch’s first time at the tech conference, though he experienced it on a make-believe basis when its San Francisco chapter was re-created in meticulous detail on the set of “Silicon Valley,” the HBO series in which he stars.

“They had all the apps set up and everybody peddling their wares,” said Middleditch of the fictional TechCrunch. “Some of them were made up, but some were just what they were and they were equally as funny. You couldn’t tell the real ones from the joke ones at times. I think that’s a good example of what happens throughout the show.”

Created by Mike Judge, known for such acerbic takes on American banality as “Beavis and Butt-Head,” “King of the Hill” and “Office Space,” the show skewers the clichés of the tech promised land, which is particularly prime for parody at the moment. Judge minds the details. The insider technical references, such as coding, are managed by an on-set tech guru, so that Middleditch likens the script to a doctor drama. In one episode, a stripper accepts payment via Square. Extras wear running shoes with articulated toes. One imagines the wardrobe trailers to be stocked with unlimited hoodies.

“Silicon Valley” has been renewed for a second season. Being cast as Richard, a nervous, soft-spoken computer programmer whose start-up lands in the well-funded crosshairs of two rival billionaire tech moguls, ranks as “easily one of the top three things I’ve wanted to do,” said Middleditch. The other two are working with Wes Anderson and “being best friends with Jim Carrey.” So far, only HBO has happened.

The 32-year-old actor grew up in Nelson, British Columbia, where he was introduced to performing via the eighth grade play. After dropping out of theater school, he moved to Toronto to pursue comedy because “I wanted to be like ‘Kids in the Hall,’ like every young Canadian did at that time,” said Middleditch, who lives in Los Angeles, where “Silicon Valley” is filmed. He’s had big parts in small movies, and small parts in big movies, like “The Wolf of Wall Street,” in which he’s credited as “Stratton Broker in a Bowtie.”

Next up for Middleditch is “Search Party,” a big R-rated comedy currently slated for September, also starring his “Silicon Valley” cast mate T.J. Miller. The plot follows two friends on a road trip to find their buddy who is stranded in Mexico. For the part, Middleditch was required to engage in full-frontal nudity, covered in cocaine. Presumably the drugs were fake, but the anatomy was his own.