Simon Doonan Dishes on the Industry at 92Y

Wickedly descriptive in rehashing the high and lows of his memoir “Asylum” Monday night, he also detailed the fashion world’s current state of mind. 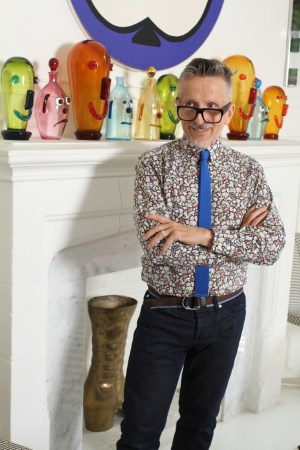 Wickedly descriptive in rehashing the high and lows of his memoir “Asylum” Monday night at 92Y in Manhattan, Simon Doonan also detailed the fashion world’s current state of mind.

Wrapping up his talk with Fern Mallis, Doonan, Barneys New York’s creative ambassador at large, said, “Fashion week has gone to this mad Mardi Gras, whirligig, hook-line-and-sideshow, [that] you don’t quite know why people are there. People have lost sight of the fact that it is in fact a trade show. What we’re seeing are clothes that will be available — maybe — if a buyer buys them four, five or six months from now. I guess it gets people excited about the general idea about fashion and maybe they go shopping. ”

This story first appeared in the September 18, 2013 issue of WWD. Subscribe Today.

Thom Browne’s show earned major praise from Doonan — “It’s good to have that in America” — while Proenza Schouler’s Jack McCollough and Lazaro Hernandez went to “a whole other level of sophistication” this season. Their debut “created a problem in a way because their first collection was bought and sold at Barneys, so a lot of kids think now that that’s the model for how to succeed. The real model is being able to schlep for somebody else for 15 years and then decide if you want to open your own company,” said Doonan.

Maria Cornejo and Victoria Bartlett were also singled out for their spring collections. Looking at designers overall, Doonan also spoke highly of Martin Margiela, Azzedine Alaïa, Romeo Gigli and Christian Lacroix. Recalling how Alber Elbaz once transformed some flip-flop-wearing Los Angeles models with Coca-Cola-stained teeth into existentialist Sorbonne students circa 1968 for a Lanvin event at Barneys, Doonan said, “That’s what fashion is supposed to do, make you more interesting, glamorous and substantive.”

Barneys’ former creative director said, “Buyers are like the great unsung heroes of fashion. I don’t know why designers put a buyer in the third row and some blogger who is still in diapers practically in the first row.”