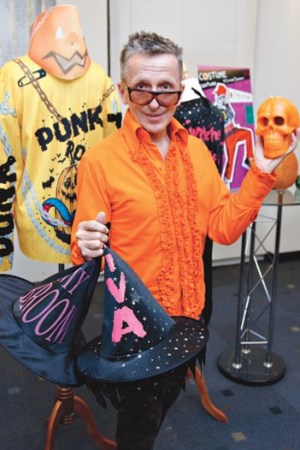 Asking Simon Doonan to design Halloween costumes is like giving a sugarholic the keys to Dylan’s Candy Bar.

Target in December asked the Barneys New York creative director to design a costume collection, and it didn’t take long for him to agree. “This project really resonated with me,” said Doonan, whose birthday is on Halloween. “The holiday is huge and it’s growing. That’s why [Target] yodeled in yours truly.”

The result, Costume Couture by Simon Doonan for Target, is a more sophisticated approach to playing dress-up.

Costumes have clever phrases scrawled on them, such as “Trick or Trend” and “Chic or Treat” in the case of the Glamor Ghost costume. A Diva Witch dress is emblazoned with the legends “Fashion Fiend” and “Honk If I’m Fierce.” “You want to be a siren, a seductive witch,” explained Doonan.

“I’m obsessed with words. There are lots of double entendres,” said Doonan, who writes a blog for Barneys, a weekly column for the New York Observer and contributes to the Daily Beast.

Doonan approached the assignment “through the prism of fashion and popular culture. No one wants to look supergoofy. Halloween is the time for people to dabble in the more crazy aspects of popular culture that they don’t normally participate in the rest of the year. They get to be a little hedonistic.”

Surrounded on a recent afternoon by mannequins wearing his Halloween designs, Doonan explained he was inspired by reality TV shows and truth-is-stranger-than-fiction news stories. “I worked on this in the wake of the Salahi debacle,” he said, referring to the publicity-seeking Michaele and Tareq Salahi, who in November managed to slip by security at a White House dinner. Doonan’s A-List Celebrity costume, a one-shoulder red dress with gold stars, looks similar to the red sari worn by Michaele. “Say Cheese” is printed on the back of the Evil Paparazzi costume. A matching Petarazzi getup for dogs features a “Tabloid Terror” cape and cap.

“People on reality TV get to be exhibitionists,” Doonan said. “I thought of The Situation and those boys from ‘Jersey Shore’ when I did the T-shirt for the Pumpkin Punk Rocker costume.” His and Hers costumes — Meatballs for him and Spaghetti for her — feature red-and-white plaid tablecloth fabric, with yarn noodles cascading from the shoulders of the woman’s tunic. A pillbox hat topped with a heaping helping of pasta and meatballs completes the look. There’s a matching costume for dogs replete with a hat that says “Ciao! Chow!” Kids costumes are $25; adults, $30, and dogs, $9.99.

“I even got to design my own logo,” Doonan said, referring to the hand-lettered emblem.

The collection will be available in Target stores on Sept. 12 and on target.com on Aug. 22.