DALLAS — Michael Simon, who turned embellished sweaters with amusing themes into a $30 million business in the Nineties, is moving beyond kitsch with this week’s introduction of a colorful sportswear collection that straddles contemporary... 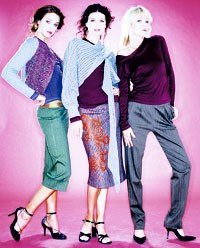 DALLAS — Michael Simon, who turned embellished sweaters with amusing themes into a $30 million business in the Nineties, is moving beyond kitsch with this week’s introduction of a colorful sportswear collection that straddles contemporary and bridge.

“It’s time,” said the designer, who is talking to some reps here. “People say, ‘You are making a big change,’ but they forget that we have made big changes all along, and our initial product was in the market that we are targeting again — a faster, more advanced market.”

Indeed, when the former dancer started knitting legwarmers and sweaters in his New York East Village apartment 28 years ago, he found a market for his intricate, hip knitwear at stores such as Bergdorf Goodman, Barneys New York, Fiorucci and Charivari.

“I was always pushing the envelope as to what you can do with a knit,” he recalled. “And we have continued to do that, even with the funny stuff.”

Simon is now best known for the funny stuff — novelty sweaters he launched in 1990, with a Santa Claus-motif cardigan that was sold at Bergdorf’s. He employed artists — not designers — to craft hundreds of cute and seasonally themed sweaters, from flamingoes to sunglasses. The knits earned an enthusiastic following among suburban women, but were dismissed as unsophisticated by the fashion crowd.

Simon still sells novelty sweaters, under the label Smitten by Michael Simon, to boutiques and Neiman Marcus, which reported one was a bestseller last Christmas. But the business has slid to half of what it was at its peak five years ago.

“In the past couple of years, we’ve been trying to discover how to do what we do and put it into the right vehicle for the new, modern fashion,” Simon reflected.

About six months ago, he hired a new design staff to help launch a sportswear collection.

“It’s a direction I set because this is where I want to be,” said Simon, 51. “I’ve always been a knitwear designer with separates. Now we have reversed that, and the story is about a collection, and the knits fit into the collections.”

The Michael Simon collection made its debut to buyers this week at his headquarters at 512 Seventh Avenue in New York, offering three groups with a Hollywood theme for June, July and August deliveries.

Bold color combinations are a hallmark of the line, such as mixes of turquoise with terra-cotta and moss green. And there are plenty of unusual knits, including a mulberry casual wrap sweater with a draped attached scarf in wool, nylon, angora and cashmere, and cardigans that have different front and back panels. They are mixed with woven pieces that also have detail, such as a stretch wool and nylon tweed skirt embroidered with an abstract leather patch, or a herringbone capelet with a fabric brooch.

“It’s a little more grown-up than some of the things you see in the contemporary area, but it’s got that flavor,” said Simon, who expects the collection to do $2 million in wholesale volume for its first season at better specialty and department stores. “It’s new. We ain’t dead yet.”

Most of the fabrics are from Italy and France, including silk charmeuse, wool jersey and an acrylic and cotton herringbone.

“I thought the knits were the strongest focus of the whole story,” McGarvin commented.

There’s also a new direction for the novelty sweaters under the Smitten label.

“All the theme stuff is going under a transformation and getting kitschy and younger,” Simon said. “It’s like the novelty business, but hipper. In six months, we’ll have a big story to tell.”