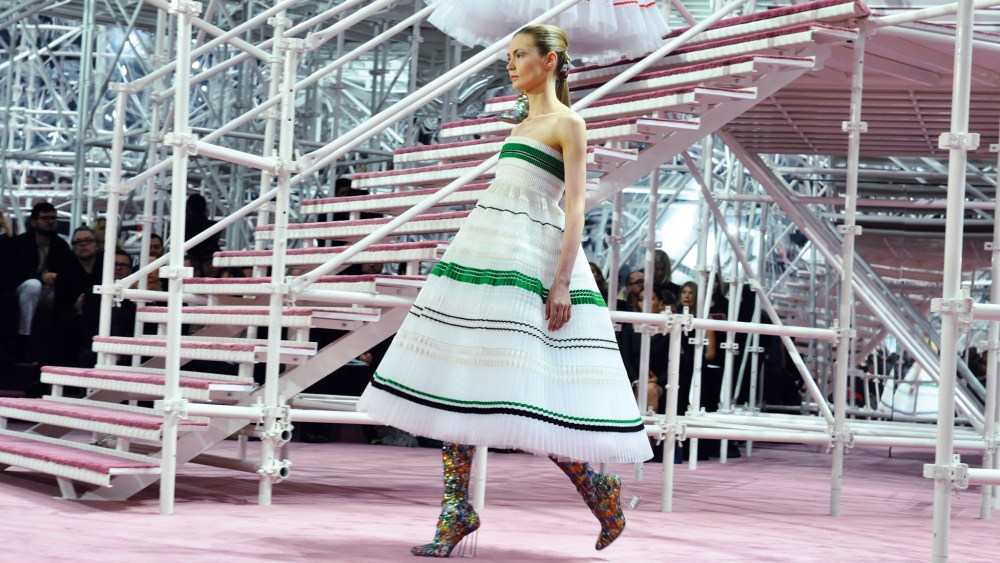 One and done. Is that the new contract norm for designers at major houses? Last week, news broke that Raf Simons had staged his last show as women’s creative director for Christian Dior. Simons exits the post he assumed after the long search that followed John Galliano’s now-infamous implosion.

Simons is the second designer this season to leave a house following a single contract; Alexander Wang sprinted his way down the runway and out the door following his final show for Balenciaga.

The two cases are similar in the obvious context: designer in, designer out. But the Dior case resonates more dramatically. First, Dior is one of Paris’ Big Two, and the anchor of Bernard Arnault’s empire. Secondly, despite Wang’s very good work for Balenciaga, we never got the feeling of a strong mutual embrace. Though aesthetically 180 degrees from Galliano, Simons seemed perfect for Dior. And while he never quite delivered a collection of the rapture-inducing sort as those with which he closed his tenure at Jil Sander, he delivered consistently beautiful clothes while moving toward claiming Dior as his own. One could see the seeds of rabid modernism planted in his first collection in which a ballgown became a sweater and skirt or a Bar, a sleek smoking. Explorations of M. Dior’s love of gardens swung respectful (flower-splashed shirts shown in flower-covered rooms) to bold (a visit to Bosch’s “The Garden of Earthly Delights”). He often played with contrast, whether hard/soft, past/future, nature/urbanity and he incorporated elements of the modern art he loves into his work.

The point of bravado came in his obvious, deep knowledge of the legacy, his invocation of its tenants, and the funneling of that through his own bold worldview, which became increasingly more apparent through the past several collections. As much as Galliano’s vision enraptured at its pinnacle, Simons dangled an equally powerful alternative — the promise of experiencing the splendor of Dior through a current/futuristic rather than retro lens. During his brief tenure, he went both powerful and gentle, closing on the latter note with his October collection, which he said was a reaction to all of the cacophony going on in fashion right now.

Backstage before his show, Simons waxed reflective. “In the context of everything that’s happening right now, I’m questioning a lot,” he said, noting that for his collection he sought “something that’s calm, calm and beautiful and sensitive and romantic.” In retrospect, it’s the same kind of note — a similar palette, even — on which he departed Sander, though that collection had more of an elegiac aura.

A statement accompanied the departure news last week. “It is a decision based entirely and equally on my desire to focus on other interests in my life, including my own brand, and the passions that drive me outside my work,” Simons said. Sounds like he wants a life — and more power to him. (The comment plays serendipitously into the cover story of this issue, “Overheated!” When WWD posed the query across the industry we didn’t expect a major event to drop into our editorial laps as Exhibit A.)

In the same release, Bernard Arnault and Sidney Toledano acknowledged “Raf Simons’ decision and very warmly thank him for his exceptional contribution to the house.”

All-around lucid words, as were those surrounding Wang’s Balenciaga exit. What neither carries: the resonant emotion of departures past — Galliano’s from Dior, Nicolas Ghesquière’s from Balenciaga, Marc Jacobs’ from Louis Vuitton and the divorce that started it all, Tom Ford’s gloves-off, still-hard-feelings split from Gucci.

There are differences. With the exception of Vuitton-Jacobs, the above situations were overtly acrimonious. But remove the ignominy of the Galliano debacle and the mistrust/anger/outrage (call it what you will) of the other two, and a glaring difference remains. Each designer took creative ownership of the brand. Though in the throes of addiction and far from his creative best when he left, Galliano had taken Dior by the Bar and transported the house and its audience to a new and magical place. His vision of Dior became Dior. Ghesquière grasped a dormant moniker, revered by the few and unconsidered by the many, and made a marvel of it, a breathless expression of high-minded uber cool. Jacobs created a sense of theatrical fancy that played into Vuitton’s tradition of travel while turning it on its head. As for Ford, he re-created Gucci into a fashion power while virtually inventing the notion of mass luxury — and setting the major house-creative director template that endured for about 20 years. (Time continues to prove the Chanel-Karl Lagerfeld pairing is the template of nothing other than its own highly envied uniqueness.)

In each case, in the fashion psyche, the brand became if not always indistinguishable from, then linked inextricably to the designer’s rendering of it. That happens not only with talent, but with time. We thought of those designers as creators first and employees a distant second, if at all — even Ford, who proudly paved the way for a new generation of commercially oriented designers. (That mind-set was part of the creation of which he took ownership.)

Each of these designers had an extensive tenure, time to claim, develop and own the house’s creative aura. When each left his respective outpost, the split was fraught with emotion, for him, for his bosses, for their clientele.

One saw Simons beginning to take genuine ownership; surely the modernist bent felt right, as if he’d seen Dior through transition to the cusp of a new age. Yet that promise didn’t have time to ferment. Three years into his tenure and less than three years into his confident takeover of the aesthetic, Simons’ modernist Dior was still a work in progress, one that will now get scrapped as a new creative director will head in.

Fashion has changed wildly since those now distant Ford/Galliano/Jacobs/Ghesquière appointments. The short-term designer tenure is yet one of many manifestations of that change, its particular fallout just starting to show. Simons’ Dior departure, and Wang’s from Balenciaga, seem less like emotionally charged schisms than carefully considered corporate breaks with the designers moving on, for whatever reasons, to pursue other interests. Thank you for your service! Nothing wrong with that; it’s probably a whole lot more emotionally sound for all involved (not to mention mature) than agonized splits marked by finger-pointing and pain. But it’s a clinical approach that consumers will feel. How is it possible for women to feel loyalty toward a brand — at least where clothes are concerned — when the next designer in might not speak to us at all? We’ll still feel the tingly excitement of awaiting the new, and passion when it clicks — Gucci for some; Saint Laurent for others. But loyalty is a different animal.

Hence the megabrands today, at least those with employee creative directors, increasingly live in and nurture dual realities. They want the buzz, the hype, the social media frenzy that comes with a hot designer; they want the creative validation that comes when that designer clicks with critics. Yet they also want — and need — to hedge against implosion, particularly by the brand’s most high-profile employee. Thus — Hedi Slimane’s broad creative control aside — many brands develop not just products, but whole identities separate and apart from the designer’s role at the company. Dior has its Rihanna and Jennifer Lawrence campaigns, its classic handbags, high jewelry, glam sneakers and tribal earrings. One doesn’t really feel Raf in their marketing, even if, of late, the brand imagery has taken a decided modernist turn.

The result is that, in this era of hypersaturation when everything operates at fever pitch and there is a seemingly insatiable global appetite for fashion, much of fashion is, at its creative source, less emotional and more clinical than ever before. It’s laudable to see Simons’ Dior run end with such civility. It’s sad that we won’t get to experience this great designer take full-on ownership of one of fashion’s greatest legacies.