Procter & Gamble has been fermenting its Japanese SK-II business for over 12 years and now it’s time to try out the rarified brew on Americans. 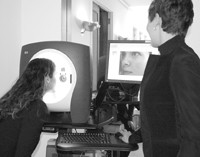 NEW YORK — Procter & Gamble has been fermenting its Japanese SK-II business for more than a dozen years and the time has come to try out the rarified brew on American tastes.

The prestigious skin care brand now claims a half-billion-dollar business and is the leading skin care brand in Asia, based on dollar sales, according to P&G executives. Its specific markets include Japan, Korea, China, Thailand, Singapore, Malaysia, as well as the U.K.

After carefully contemplating a path for SK-II, P&G said the time is finally right to transport its treasured and finely honed brand to the U.S.

With exclusive price points, such as $85 for a 75-ml. bottle of its core item, Facial Treatment Essence, and $200 for a 30-ml. Power Signs Treatment Concentrate, an antiage cream, SK-II will likely draw comparisons to brands such as Clea de Peau and Creme de La Mer.

SK-II’s fairy-tale-like origins stem from a monk’s visit to a Japanese sake brewery some 20 years ago, where he noticed the hands of workers were remarkably smooth. While it sounds like urban legend, today P&G still sources yeast from the monk’s family farm and it is used to make SK-II’s key ingredient, Pitera, according to Simone Bretherton, product development manager for SK-II. Pitera is a blend of vitamins, amino acids, proteins and organic acids. The ingredient is said to improve skin stimulation and renew the outer layer.

And for P&G, SK-II’s arrival in the U.S. is more than just another brand’s global expansion. It also marks P&G’s first step into the U.S. prestige skin care market that will likely be followed by color cosmetics, which SK-II offers in many other markets. P&G is already immersed in the prestige fragrances sector in the U.S. with a portfolio containing Hugo Boss, Helmut Lang, Lacoste, Jean Patou and others.

SK-II came to P&G in the 1991 acquisition of Max Factor from Revlon. The brand had not been more than a footnote in the deal, noted P&G chairman A.G. Lafley in a 1999 interview with WWD. “It wasn’t even mentioned in the press release,” said Lafley at the time. But Lafley had an instinctual sense about the brand and continued to provide resources to nurture it. It’s known throughout P&G that it is one of Lafley’s precious finds.

Today, it is in the hands of Paolo de Cesare, president of global prestige beauty and skin care at P&G, who Lafley sent to Japan in 1999 to see what more could be done with SK-II, after witnessing the brand blossom from a cult favorite to a market leader.

“The SK-II expansion into the U.S. is a milestone,” said de Cesare in an interview earlier this week. “It is a huge market, and we are ready to bring a new level of product performance and of exclusivity to the U.S.”

The intent is to “create an exclusive experience and expand the brand very selectively.” He added that SK-II has the potential to become one of P&G’s billion-dollar brands. “This is a brand centered on loyalty and service,” noted de Cesare. And women become dedicated to it, he claimed. “In Japan, we have consumers who use it day in and day out, and they invest $1,000 a year.”

Based in Hunt Valley, Md., the brand is overseen in the U.S. by Sergio Arreola, U.S. marketing manager of SK-II. “It is a jewel brand in our portfolio and it is treated with the care of a child,” he said.

SK-II counters featuring the brand’s red-and-black signature tones have been created and modified to fit each of the Saks doors. Sales associates for SK-II will be trained by P&G at a central location. A major emphasis is on “creating a wonderful in-store experience and delighting the consumer,” he added.

P&G declined to comment, but sources predicted first-year sales could hit $3 million to $5 million at retail. The launch will be supported by print advertising that breaks in April books such as Vogue. The ad budget is projected at about $1.5 million. There also will be sampling. Saks is expected to target messages to its shopper list. “The goal is to build an image of exclusivity,” noted Arreola.

High-tech tools will be at each counter to assess a consumer’s skin condition, and beauty associates have been trained to suggest an appropriate regimen. Five Saks counters will offer the SK-II Beauty Imaging System, an imaging device that involves customers placing their faces into a computer terminal-like box with results appearing on an adjoining video screen. At the other six locales, two handheld devices will be used to detect skin characteristics such as moisture level and other conditions.

A U.K. retailer that carries SK-II said it has been satisfied with the results. “We are extremely pleased with the sales figures from SK-II. Sales are on a steady increase,” said Christine Benson, buyer designate for contemporary-skin care at House of Fraser. “SK-II reinforces House of Fraser’s mix of state-of-the-art high- tech skin care.”