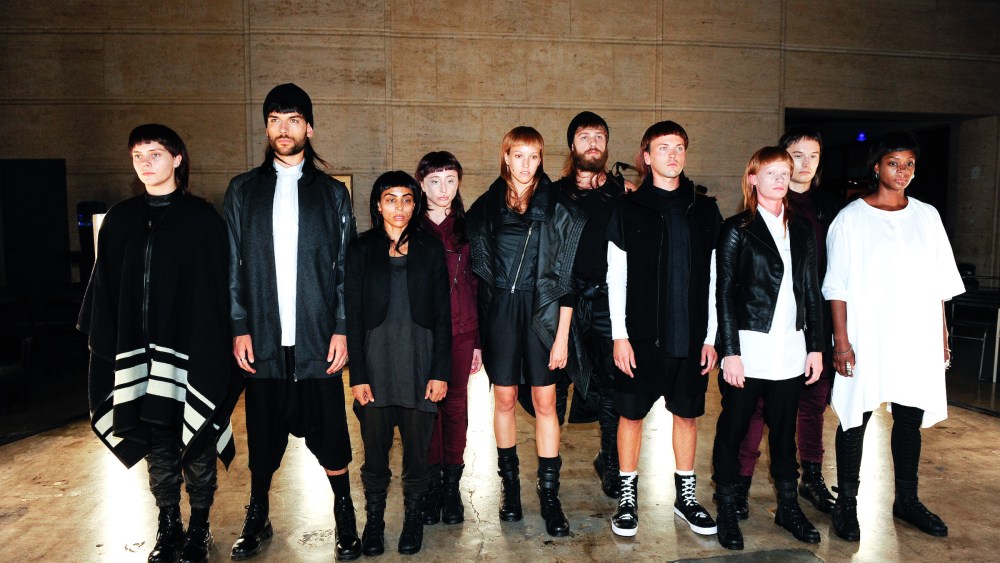 At RVCC in the former Federal Reserve building on Friday, following six seasons at New York Fashion Week, the brand emerged in its hometown with a new strategy. Its last appearance in New York was a year ago, when it presented the spring 2016 collection. Since then, it’s been weaning off the wholesale model. At its peak, the company had 35 accounts, including Church in Los Angeles, Atrium in New York and a number of international retailers. This fall marks the first time it is selling only through its freestanding store in downtown L.A. and its e-commerce site.

“Everyone knows that wholesale can be a beast,” said Jonny Cota, Skingraft’s founder and creative director. “After a few years of doing it, we were uninspired by it.”

The transition comes as Skingraft marks a decade in the fashion industry, which is witnessing a number of independent designers testing new strategies to survive in a rapidly evolving market. In addition to his flagship in the center of downtown, Cota is scouting the location for a second store on the other side of the city — perhaps in West Hollywood — to open as early as next year. What’s more, by stepping away from the trade show circuit where he traveled to New York and Paris to meet wholesalers, he can reduce prices by about 25 percent.

The fact that Cota owns a factory in Bali also allows him the flexibility to pivot his production, undertaking small runs and creating capsule collections. He plans to drop new product on the first of every month starting in October.

“It’s cool to see,” said Hawthorne, an acquaintance of Cota’s through the years, who stood out from the rest of the Goth-tinged crowd in his sleek Sandro suit and shiny Paul Smith sneakers. While his custom-made button-up shirt matched the blood red accenting Skingraft’s black-and-white palette, he described his style as “a little more old school.” Still, he admired the black blazer accented with trapunto stitching. “I want to buy it for my girlfriend,” he said.

Titled “Primal,” the new collection indicates a return to Skingraft’s roots that Cota planted 10 years ago. To refresh people’s memory, an installation illuminated in crimson displayed a signature design from each year in business: a white leather jacket with elaborate snaps on the sleeves, a fishnetlike tunic, black leggings accessorized with leather shinguards and more. “It’s future mystic — something very ancient, something very future,” he said. To highlight the white-striped black poncho, asymmetric red T-shirt, drop-crotch shorts and other pieces from his latest collection, he recruited a dozen diverse dancers to pop, lock, leap and spaz out to a throbbing electro beat within a circle lit by fluorescent bars.

“I would love to have them dance at one of my shows,” Hawthorne said. “They were all wearing the clothes and they can move that well. What’s important to me about clothes is you can move in them.”

Aside from allowing freedom of movement, Cota had the goal to eliminate a seasonal mind-set from his designs. “L.A. doesn’t really have seasons,” he said. “A lot of the people who love our brand shop seasonless.”

He’s also able to stay true to himself. With the traditional runway shows in New York, “we felt that we were following these expectations of what we were supposed to do for the industry,” he said, adding that his new credo was: “‘Let’s do something super-creative off the fashion week calendar.’ That also feels like charting a new path.” Personifying the West Coast philosophy that has drawn a variety of designers here, he noted, “There is no status quo in L.A.”