Skirts have long been a staple in tennis and golfwear, but now they've become popular in running, biking and fitness dance classes. 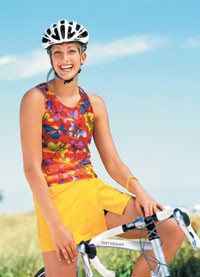 NEW YORK — Skirts are getting a leg up in activewear.

While they have long been a staple in tennis and golfwear, skirts are now being designed and worn for high-energy sports such as running, biking and fitness dance classes.

These newer products are differentiated from traditional “skorts,” because they are made of performance fabrics and generally have a compression shorts layer in Lycra spandex underneath a looser skirt fabric. Some biking and triathlon skirt styles come with padded shorts, while others are sold separately as wraparound items so that triathletes and others can put them on when they are done swimming or as an added layer.

Among firms that make performance skirts are New Balance, Nike and Under Armour, as well as Tyr, Marika and Moving Comfort, and biking companies Sugoi and Terry Precision Cycling.

Skirt Sports is a new company that designs and sells functional performance skirts under the Triks label, which is skirt spelled backward.

“My idea was to create functional and performance-driven products that are sexy, sporty and fun,” said Nicole DeBoom, a professional triathlete and Skirt Sport’s founder, who said the Triks line began selling in stores this spring. “We all want to look good while we work out.”

While some athletes might balk at the idea of wearing a skirt for cardio-heavy workouts, these products are gaining in acceptance among active women who want to wear something that can transition to places beyond the gym.

“Women like them because they can wear them out to errands after their run,” said Kristen Marino, owner of Slope Sports in Brooklyn, which sold out of the styles it carried this spring from Moving Comfort. “We were surprised at how popular this style has been and we plan to carry more skirt styles going forward.”

Another major draw — skirts help conceal certain body areas and this appeals to women starting to get into shape, as well as older athletes and others who don’t want to be so bare.

“Walking around in skintight lycra is a hard thing for many women,” said Paula Dyrba, vice president of marketing at Terry Precision Cycling.

Many of the skirt styles have matching prints or coordinating colors in the shorts layer and the skirt, giving them a more feminine and fashion-forward edge.

The Triks line, for example, is available in bright colors such as hot pink and purple. The line, which consists of five skirt styles with coordinating tank tops, is available in about 15 specialty sport stores this season and the Web site skirtsports.com will begin online selling on Friday, DeBoom said. Wholesale prices range from about $20 to $35.

“The reaction has been fantastic,” said Toner, adding that offering skirts is part of New Balance’s plan to introduce more fashion-forward apparel for running.

“We have sold them for the past five years, but have seen more interest lately,” Dyrba said. “Skirts now account for about 25 percent of our apparel offerings and generate about $1 million in sales per year. We are now selling more skirts than biking shorts.”

Specialty running stores and bigger retailers are starting to embrace the trend.

Paragon, one of Manhattan’s largest sports stores, is offering a small selection of skirts this season in its biking department, including styles from Sugoi, as well as some skirt styles in its running department from New Balance, said a company spokeswoman. Major sporting goods chains such as Dick’s Sporting Goods and The Sports Authority also carry a small selection of running skirts.

While skirts are gaining acceptance among some female runners and bikers, others are less enthusiastic. This product has already generated some controversy among hard-core athletes, and women have been debating the issue on running and triathlon Web sites.

At the triathlete.com site, a number of writers responded to a posting about the new Triks line. A message from a member named Catherine said, “Skorts have never appealed to me, especially for activewear. They’re too cumbersome and have extra unneeded material.”

At Coolrunning, a running Web site, member Esnackpack wrote: “I saw someone wearing a skirt thing running last week and I thought: ‘you can’t run in a skirt!’ I definitely won’t be buying a skirt for running,” while Jean230114 had a different response: “Being as self-conscious as I am about the size of my backside and the upper thigh area, I think the skirt idea sounds like a good one.” Letchitsa1 wrote: “I don’t buy skirts for work or church, so I’m definitely not buying one to run in.”