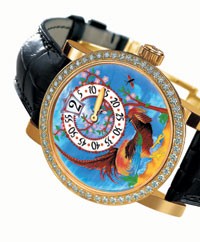 GENEVA — Luxury timepieces are set for a period of robust growth.

Executives attending two major Swiss watch shows — the Salon International de la Haute Horlogorie in Geneva and Baselworld: The Watch & Jewelry Show in Basel, Switzerland — reported a brisk start to the year and voiced confidence for double-digit sales gains over 2004. They said the growth is being driven by strong demand in the U.S. and the Far East, with increasing demand from women for expensive watches.

The shows, which attract buyers from around the world and serve as a bellwether for the jewelry and watch industry’s general health, wrapped up earlier this month.

“The outlook for luxury timepieces is strong,” said Cartier International president and chief executive officer Bernard Fornas. “The top of the top is exploding.”

At Rolex, Allen Brill, president and ceo for America, said sales have been resilient and the company is on track for double-digit gains in the U.S.

“There has been a marked turnaround in the sector over the last 18 months and the environment continues to be favorable,” said Philippe Pascal, head of watch and jewelry operations at LVMH Moët Hennessy Louis Vuitton. “There is positive momentum. We should have double-digit growth [in the division] this year.”

Karl-Friedrich Scheufele, vice president of Chopard, said sales at the family-owned jewelry and watch firm had been up more than 10 percent in the first three months of the year.

“Last year was our best year ever,” he said. “And we are very bullish again this year, barring any geopolitical surprises.”

Bulgari ceo Francesco Trapani said the year has started “strong” and he was “confident” for the remainder of 2005 based on orders taken, while Movado Group president and ceo Efraim Grinberg said he was gunning for increases of more than 10 percent this year.

Philippe Stern, president of Patek Philippe, said: “People are positive and I don’t see any problems. It will be a big year.”

Asia, the Middle East and the U.S. are driving business, executives said. Many emphasized they would concentrate on further building their nascent operations in China.

Fornas said Cartier would inaugurate another six or seven stores in China this year, and Scheufele said Chopard, which opened its first store in China last year, would “significantly” strengthen its presence in China over the next few years. Cartier now has stores in Beijing and Shanghai.

The U.S. is getting attention as well, executives said.

“The U.S. market is underpenetrated in luxury watches,” said Daniel Lalonde, president and ceo of LVMH Watch & Jewelry for North America. “The market for us there grew in the mid-30 percent range last year. It’s been a great start to the year. We think we should see higher growth this year than last year.”

Executives said the only blot on business is Europe, which is mired in high unemployment and low consumer confidence.

“It’s simple — Europe doesn’t exist,” said Severin Wunderman, chairman of Corum. “Germany is more dead than dead. In Switzerland, we may as well close. But Russia is unbelievable. India is taking off and the U.S. is great. Even with the euro inflating prices, business isn’t suffering in the U.S.”

Among attention-grabbing developments at the fairs was a stark emphasis on women’s watches, especially from firms that have built their businesses on complicated creations for men.

Tourbillons, a sophisticated mechanical movement that compensates for the effect of gravity on time, was introduced in women’s watches, including in a $250,000 model at LVMH-owned Zenith.

Chronographs and perpetual calendars were widespread, often blinged out with diamonds and accessorized with mother-of-pearl faces. Sports details were dressed up with diamonds, such as in Bulgari’s Ipno digital watch finished with diamonds.

Retailers said the use of rose gold was an attractive trend. Face sizes remained big, a continuation of recent seasons, and many models were touted as nongender specific.

But some retailers and vendors identified a trend back to smaller women’s jewelry and so-called cocktail watches.

“Definitely, there’s been a higher concentration on women’s than in years past,” said Andrew J. Block, senior vice president of marketing at Tourneau, the privately held retailer that has some 25 stores across the U.S. “Much of what we consider for women is actually designed as a men’s watch. The lines aren’t drawn clearly anymore between what’s men’s and women’s.”

Some retailers questioned the viability of multifunctional timepieces for women. They wondered whether women would take to the same complicated pieces for which men willingly pay big bucks.

“Women don’t want to have to wind their watches,” said Block. “They are often happiest with a quartz movement. Their first concern is whether the watch is pretty.”

Many firms said they would concentrate on building their women’s business, especially in the U.S., where women are said to own fewer watches than their counterparts in Asia or Europe.

“The same women who didn’t wear a watch when they were younger are now wearing watches,” he said. “Grandmothers told their granddaughters not to wear watches because their boyfriend or husband should wear the watch. But that macho attitude is over. A watch represents power for a woman today.”

For their part, retailers reported brisk business so far this year and said they expected the upward trend to continue.

“Business will be good,” he said. “There is demand for high luxury.”

Tourneau’s Block said business has been “booming.” He said Americans were spending more on watches at home and Europeans also were buying watches in the U.S., profiting from the high value of their currency against the low dollar.

Donald Levinson, president of Chicago’s Trabert & Hoeffer jewelry boutique, said his high-end watch business among women had been “unbelievable.” He said the higher prices for European timepieces caused by the weak value of the dollar had not dampened enthusiasm.

Most vendors said they had increased prices in the range of 8 to 15 percent in the U.S. so far this year to compensate for low value of the dollar. Despite inflated prices, though, they said there had been little price resistance.

“I can’t sell a watch under $2,500,” said Wunderman, who was cited by retailers for many of his creations this year, including limited-edition pieces with designs in stone marquetry or hand-painted enamel on the faces.

Wunderman also reintroduced Corum’s iconic Golden Bridge, with a movement that is visible.

Harry Winston and Chanel unveiled tourbillons that drew praise from retailers; Patek Philippe introduced a women’s annual calendar watch, one with a mother-of-pearl face and another set with diamonds, and Cartier reintroduced its iconic Pasha watch and a new version of the ladies tank called Tankismme.

Retailers lauded the relaunch of Ebel by the Movado Group. They said the brand was being taken back to its roots and that it should benefit from its high-profile ad campaign featuring Claudia Schiffer. They also applauded Tag Heuer’s diamond-encrusted chronograph for women, which is being promoted heavily in ads featuring Uma Thurman.

Mont Blanc was among the brands to broaden its push into ladies watches this year. Lutz Bethge, the brand’s managing director, said 20 percent of its watch sales were to women and he hoped to tip the balance further this year.

“Watches are our fastest-growing category,” he said.

Jewelry also garnered attention at the shows, though most Americans said watches were the main reason they visited the fair. Retailers said color was the main theme and pointed to strong styles from Mikimoto, De Grisogono, Damiani, Roberto Coin, David Yurman, Chopard, Van Cleef & Arpels, Piaget and H. Stern. Many firms, including Swatch Group’s Omega brand, have been banking on jewelry extensions to broaden growth.

David Yurman reported a strong start to the year, saying orders had increased by double digits so far. He said his top-selling styles were in gold or with pearls.

Roberto Stern, president and chief designer at H. Stern, said business has been up 20 percent in the first part of the year. He pinpointed a trend for vintage styles, including Art Deco effects.

The trend for mixing dressy styles with sporty elements was mirrored also in ladies sport watches that came with diamond-encrusted faces.

Even if jewelers reported good business at the fair, most American buyers said their jewelry buying was affected by the low value of the dollar.

“The dollar is more of an issue for jewelry than for watches,” said London Jewelers’ Udell. “I think we will be buying more jewelry in the United States this year.”

That said, most retailers confirmed the boom in demand for branded jewelry. “That’s what our customers want right now,” said Levinson of Trabert & Hoeffer.