Instead, he is helping Christian Dior amass a far-flung collection of contemporary works by inviting... 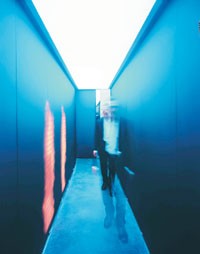 Instead, he is helping Christian Dior amass a far-flung collection of contemporary works by inviting important artists to create fitting rooms for its men’s departments.

The first, by award-winning French artist Pierre Huyghe, has been fascinating visitors to the Dior Homme store in Milan since it opened in February 2002. Such is the word-of-mouth buzz that some shoppers march right up to a discreet corner of the second floor to have a look.

Or make that experience. Motion detectors, set on delay, sense the occupant’s presence and echo his or her form with hot yellow light projected through a dark glass wall — giving the impression of a ghostly, if tardy, shadow.

The second fitting cabin, by Stockholm-based artist Carsten Höller, bowed last month at the new Dior flagship on Ometesando in Tokyo. Outfitted with four surveillance cameras — and a red target demarcated on the floor — it resembles some futuristic medical examination room à la “Logan’s Run.” Still images of the occupant are broadcast on four large-format screens in lieu of a mirror.

“In filming people, they see themselves exactly as they are,” Slimane explains over breakfast at the Café Marly here. “It’s a different perspective and a different aspect of transformation.”

Slimane says the concepts of privacy and intimacy are legitimate ideas for a couture house like Dior. Thus, he views the changing rooms as the perfect turf for conceptual artists to explore ideas like perception, identity and transformation.

In an interview, Höller allows that the protruding cameras in the Tokyo store may be unsettling for some Japanese, as much as they are obsessed with technology and gadgetry. “There’s an edgy side to it in that you don’t really know if you’re the only one who sees you,” he says. “But it’s also narcissistic. It’s about giving you a better idea of yourself, and at the same time, slightly shaking your foundations about your beliefs in how you look. Also, the images are time delayed so you see yourself in the past and that itself creates another peculiar distortion.”

Of course, all such concepts resonate richly within the realm of fashion — and Höller even allows Dior Homme customers to choose between color or black-and-white fitting rooms.

The coming months will see Dior Homme’s collection of installations grow quickly. New York’s Dior Homme store, slated to open next month, will feature a fitting cabin by Swiss artist Ugo Rondinone that will employ graphic, optical techniques, while a Paris location on Rue Royale, bowing next spring, will feature the work of Belgian video and installation artist Ann Veronica Janssens, who plans to use strong light to break down perceptual barriers.

Rondinone, 39, used Manhattan’s grid-patterned streets as the conceptual jumping-off point for twin fitting rooms where black-on-white or white-on-black grids create a disorienting optical illusion. “Walking into the cabin, you get kind of dizzy,” he explains. “All the walls and even the floor have this wavy pattern, and there’s a diffusion of sound of someone breathing. All the hard angles become soft.”

While that might sound like a recipe for nausea, a full-length mirror calms the effect and Rondinone even notes that the black-and-white background actually provides a perfect foil “so the colors and details of the clothes can really be seen.”

Looking ahead, Slimane has lined up two other art-world stars for forthcoming Dior Homme flagships in London and Paris. They are Los Angeles-based video wiz Doug Aitken and Olafur Eliasson, whose sun-and-sky installation is astounding visitors to the monolithic atrium of London’s Tate Modern.

Slimane considers most of the artists with whom he works as personal friends, and views the collaborations as an organic part of their relationship. “You always learn and improve from that,” he says. “It’s a way to do a project and a different way to know someone,” he adds. “Of course, we’ve been very lucky they all accepted to do it.”

Having artists contribute was always part of Slimane’s plan for Dior Homme. “I never wanted to have all the shops designed the same,” he says. “Even in the choice of artist, we try to have an organic relationship between the artist and the city.”

Ironically, Slimane is assembling a collection of important and thematically related artwork that can never be shown in one place. But in a way, it’s, ahem, fitting, given the boundary-dissolving nature of some of the works — and Slimane’s own views.

“I don’t want the art and the fashion to conflict,” he explains. “It’s like they’re sharing the space, like roommates.”