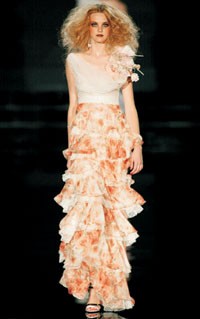 Valentino: While some use the couture runways for theatrics, Valentino’s approach is straightforward. He stands by a measured mantra that cuts to the heart of the matter: Give the ladies what they want, for goodness’ sake. And that quintessential lady, the couture client who boasts fashion sense and a bank account to match, must communicate her needs to Val via ESP.

Without allowing any fleeting trend to turn his head, Valentino sent out a fine enough collection positioned to pack that good-time gal’s closet. His look was one steeped in sexiness, balancing equal parts of wearability and of luxe. Suit jackets were sweetly trimmed with beading or tied with a ribbon, but skirts came cut slim and slinky to keep things far from prim. For the femme who likes to work her wiles while sticking to the high road, a white party dress with a diaphanous bodice and lace layers peeking out from underneath would do the trick. And the gowns followed suit, from Val’s frisky showstoppers to a petal pink number made from embroidered flowers.

Along the way Valentino showered the whole lot — cropped jackets, dresses, siren gowns alike — with more crystal than a Baccarat chandelier, coating the sleeves of a boxy lace jacket with a glistening crust and using sparkling buckles to spice up a suit.

If things got too spicy or over-done once or twice, with a gown in giant polkadots or a couple of looks burdened with stale ruffles, the rest tempered those flops. But there was no antidote for Val’s choice of hair — blown to webby masses — and makeup — more rouge than Diana Vreeland wore and equally heavy eye makeup. Program notes explained that Carly Simon’s song “You’re So Vain,” which played throughout the show, was the inspiration for this self-indulgent woman. As Robert Louis Stevenson said, “Vanity dies hard.”

Emanuel Ungaro: “2, avenue Montaigne” read the invitation. Emanuel Ungaro would present his couture collection at his atelier — bravo! Surely the shift in venue suggested that the show would celebrate couture in its purest sense, one focused on the art and craft of the discipline, the way it used to be before press frenzy and theatrics turned it into something else. Old School, as they say on ESPN. The designer’s program notes suggested the same.

“Formerly we presented our collection in house…” Ungaro wrote. “Without doubt vainly and fancifully we have showed our collection at different venues and the sacrifice has been part of our soul. The time has come to return haute couture to where it built its roots and its nobility. The trade deserves to reconnect with its cultural heritage, its professional integrity, its ethic of presence and its aesthetic of existence.”

Okey-dokes. We might have phrased it differently, but we like where this is going. No bells, no whistles, no folly. Only some of the most painstakingly crafted clothes in the world, ready to be savored, up-close. So excuse the dismay when Karolina Kurkova emerged through a doorway all glammed out in exquisite embroidered flowers with a huge pouf of tulle framing her face. She looked this way and that, giggled and ran back to fetch another model, Caroline Trentini, dressed in a micromini medley of flowers, dots and animal spots. They went up and down the runway and through a hallway and back. This went on through 23 complicated, colorful looks, as the girls rambled about, stopping to wave, kiss and mock-gossip — (Karolina did share a genuine yuck or two with André Leon Talley) — before settling into white slip-covered upholstery for a group photo-op.

Talk about visual overload. One needs to focus to take in the richness of Ungaro’s work, the flamboyant drama of his joyous colors and patterns. But there was just too much other stuff going on to give the clothes their due. Sure, some quite beautiful clothes couldn’t be missed — a black-and-white tweed jacket over a charming black lace dress, a delightful purple-and-white dotted dress and some major evening moments, including the bride’s breathtaking kimono. But Ungaro displayed too strong a yen for short, tight, draped and legging-ed, and if an overall mood could be extracted, it was 1987. That said, this show sent so many mixed messages that one could not help but leave utterly confounded.