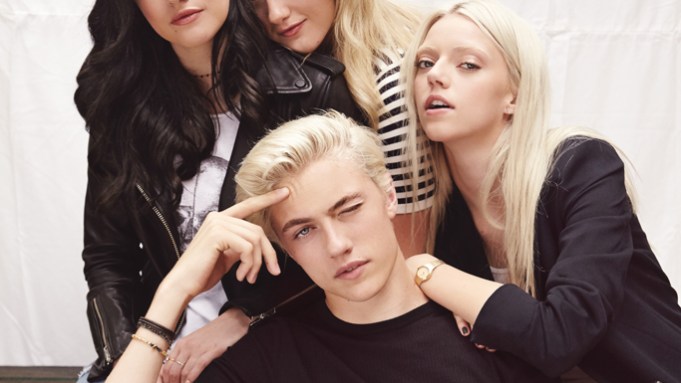 It’s hard not to stare at the Smith siblings, especially at close range. Seated shoulder-to-shoulder on a velvet sofa, a riot of platinum and ebony hair, porcelain skin and long limbs, they can disarm even the most jaded with their piercing blue eyes and impish smiles. For the uninitiated, the Smiths are Lucky Blue (17), Pyper America (18), Daisy Clementine (19) and Starlie Cheyenne (21), the Utah-bred models and musicians who are igniting the fashion and social media worlds.

“When I post a picture of myself, I can get lots of ‘likes,’ but when we’re all in one together, it like, blows up,” explains Lucky, who has reached mega-heartthrob status with 1.2 million Instagram followers and an average of 40,000 “likes” per post, impressive for a male model.

Daisy was the first to sign a contract — with Next Models at age 14 — and two years later, while visiting the agency in Los Angeles with her siblings in tow, the other three signed on, too. Shortly thereafter, Hedi Slimane shot their first story for Vogue Homme Japan. Since then, their collective campaigns have included Gap, CK One and Tommy Hilfiger.

Music was also a family affair. Their parents gave them instruments for Christmas 10 years ago — a bass for Daisy, guitars for Starlie and Pyper and drums for Lucky — and they started performing surf rock covers by The Ventures and Dick Dale at local car shows.

Says Pyper, “We had been doing it as a family thing for a while, and when our agents at Next asked us to move to Los Angeles, we decided if we go out there, we’re going to go for the music as well. So we took it more seriously a couple years ago.” Their band, The Atomics, will put out its first album next year. “We are trying to develop our sound and collaborate with people who get our vision. It’s really nice how it can be incorporated with modeling because a lot of clients love that factor of “these also do this,” Pyper adds.

Lucky and Daisy describe The Atomics’ sound as similar to The Black Keys. Daisy says, “My dad always played us Tom Petty and I can hear a little of that in the music we play and songs we write.” Pyper adds, “ My dad also grew up playing a lot of disco and as the bassist, I get inspired by those funky basslines.” Starlie, who is also the lead vocalist, says, “With each person, you’ll get their influences. I’m the singer so I love Amy Winehouse and Etta James, but it’s everyone’s inspirations that really make our music.”

Lucky has also started to dip his toe into acting: This summer, he begins shooting his first lead role in the romantic tearjerker “Love Everlasting” in Utah and Los Angeles. “I think me and Pyper were the most curious [about acting]. I remember her always wanting to start acting and I didn’t really care about it until a few years ago.” They both have taken acting classes in L.A. “Modeling and acting are similar in that you’re kind of portraying something,” says Pyper, whose dramatic and comedic streak can be seen in her Instagram alter ego bevhillsmom, in which she lampoons, well, a Beverly Hills mom. “It’s my favorite,” says Lucky.

Although they’re all dressed in black, white and blue, each sibling has a unique style. Lucky channels a “modern vintage” look and favors Levi’s and Tom Ford, Daisy is more classic and feminine, Pyper’s style is more masculine and structured (Daisy and Pyper both love Topshop), and Starlie describes herself as “retro pin-up-meets-rock-’n’-roll” whose go-to’s include high-waisted skirts, ankle-strap heels and a leather All Saints jacket (Saint Laurent is her favorite designer).

“Fashion is a way you can express yourself, so it’s good stuff, you know?” offers Lucky.

“But what kinds of pieces do you wear? You know, explain it,” Pyper says, poking him in the ribs.

“I wear modern…vintage,” he says.

“Cool. That makes a lot of sense. I’m really impressed,” she deadpans. Daisy explains how fashion influences their music. “I’ve always felt that fashion and music have fed off each other. I think our look has always been a part of our shows. Even when we were younger and playing the car shows, we all wore matching dresses and it was really Fifties-style, so I think the look has been just as big as the music.”

Suddenly, there is a flurry of cell-phone beeps, so it seems like a good time to ask about their relationship to social media. “Well, it for sure helps your career because it’s getting your face in front of people. And if you post something or if a company wants you to post something, within minutes you can have thousands of people see it,” says Lucky. Adds Pyper, “A lot of clients just want that extra advertising.”

Daisy elaborates. “Marketing has completely changed. People aren’t just sitting there watching TV all day and they don’t go out and read newspapers; they’re on their phones. Because we are so comfortable with social media, it makes sense that kids and influencers are the ones who are marketing and advertising stuff. I almost always find new brands on Instagram by people tagging them. You see it in a much more natural way than someone shoving it in your face and saying, ‘Buy this.’”

While the troupe is headed to Jackson Hole, Wyo., to shoot a “top secret” ad campaign, the girls say they like to spend their free time at the beach. “Honestly, if I’m around people I like, I can do nothing and have a good time,” says Lucky. “But when I have downtime, I like to go get a burger.”

Says Pyper, “Downtime is a little bit rare because we’re working and traveling and as soon as we get home, it’s like, ‘Let’s work on music.’ So after practice, we’re just super-chill: eat, sleep, model, music, buy.”