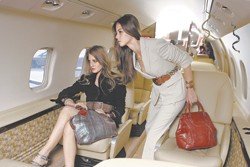 NEW YORK — Thousands of eagar online fans are impatiently awaiting the August arrival of the cult film “Snakes on a Plane” — a campy thriller in which an assassin, along with 400 deadly snakes, takes over an airplane. Meanwhile, there’s also plenty of buzz this fall about snakeskin accessories, whether they’re worn in the office, a club or on a trans-Atlantic flight.