By Alexa Tietjen and Aria Hughes on December 20, 2017
View Slideshow 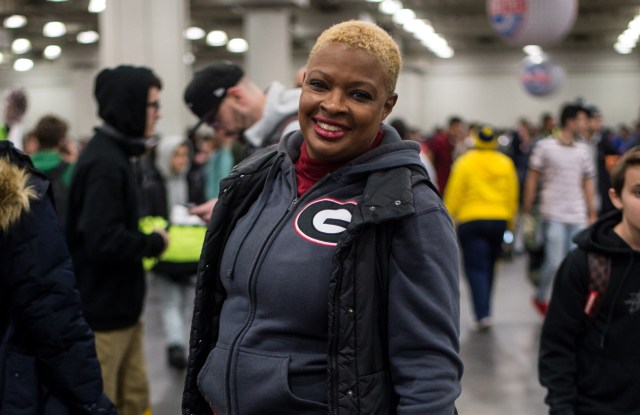 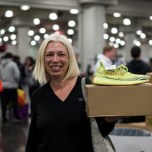 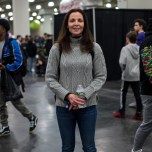 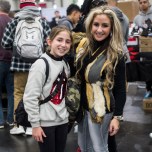 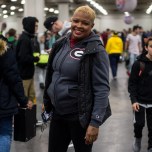 Over the weekend, Sneaker Con New York drew approximately 19,000 people to the Jacob K. Javits Center, where guests bought, sold and traded some of streetwear’s most coveted pieces. The crowd of predominantly youths — chaperoned by their parents — included first-timers, seasoned sneakerheads and influencers alike. WWD caught up with the real MVPs: the moms of Sneaker Con. Here, they share their thoughts on the event and sneaker culture.

WWD: What’s your son’s main goal today?
Terry: He collects. He has a YouTube channel called Heatedkicks, [to son] Heatedkicks? He and I are into sneakers. I guess he’s gotten me into it and I collect all the Yeezys. I got these [Yeezys] this morning.

WWD: How big is his sneaker collection?
Terry: He has three bedrooms, so. If you go on his YouTube you can see it. It’s really, really big.

WWD: How big is yours?
Terry: I have about 25, 30 pairs, but other shoes. I got over the high heels. Sneakers are much more comfortable.

Max (Terry’s son) from Long Island, N.Y.
WWD: What do you do on your YouTube channel Heatedkicks?
Max: I unbox things and show my pickups and give tips on how to get certain sneakers.

WWD: How long have you been into sneakers?
Max: About two years.

WWD: What has been your favorite purchase of the year?
Max: Definitely my Air Mags. We met a guy in the city and he had them for $7,000 — he was all verified and stuff, we made sure of that — it took two weeks and it was a pretty good price so we got them.

WWD: What are your favorite brands?
Max: I do like Adidas with the whole Boost craze, but I’m into Jordans.

WWD: Your favorite release of 2017?
Max: Honestly, probably the Off-White Jordan 1s. I got those, too. I waited on my laptop and on the Nike SNKRS app, too. And I clicked it on time and got it.

WWD: What do you think of this event?
Ali: It’s pretty cool. It’s my first time. [My son has] been to, like, five of them. Different conventions, different places.

WWD: What do you think of sneaker culture?
Ali: I’m a beginner, so I’m just starting to learn it. It’s cool to a certain extent. It’s a little out of control when one pair of sneakers [costs] a thousand dollars. The collection of the thousand-dollar pairs of sneakers is a little crazy for me.

Helen From Long Island, N.Y.
WWD: What’s your grandson looking for today? Anything specific?
Helen: No, not really. He’s just looking around.

WWD: What do you think of Sneaker Con?
Helen: Oh, it’s fun.

WWD: Are you familiar with your grandson’s sneaker collection?
Helen: No.

WWD: Is this your first time here?
Mona: It is.

WWD: What do you think?
Mona: It’s a lot smaller than what I thought.

WWD: Really?
Mona: Yes, I thought it was gonna be more massive.

WWD: What’s your son looking for today?
Mona: My son is a sneakerhead, but he’s a very big boy, so he’s coming to look at sneakers and see what’s out, what’s the latest thing. He’s a little disappointed ‘cause he’s a 13-and-a-half and a lot of the sneakers are smaller.

WWD: How big is his collection?
Mona: He doesn’t have that ‘cause he keeps growing. He’s only 13 and he wears a 13.5. So what happens is, every time we buy him sneakers, he grows out of them. So he only has, like, less than 10 at the moment. His father’s a sneakerhead.

WWD: What’s your daughter looking for today?
Sarah: She just wants to see what’s out there. She’s in touch with all the latest and the greatest sneakers and she wants to get a feel for what’s out there and the prices.

WWD: Is this your first time here?
Sarah: Yes.

Kayla (Sarah’s daughter) From Florida
WWD: Why are you here?
Kayla: Um. I like shoes.

WWD: When did you start to get into sneakers?
Kayla: It was like a year ago. I just saw all the cool new designs.

WWD: What’s been your favorite release this year?
Kayla: Probably the Off-Whites. I got the Vapor Maxes.

WWD: How did you get them?
Kayla: I bought them retail at Kith. I stayed in line with my friends.

WWD: Are you looking for something here?
Kayla: The Zebra Yeezys, and also the red camo ones.

WWD: Is your son buying or selling today?
Jen: A little bit of both. I think more buying. My son has some stuff from Supreme, but I don’t think he’s doing anything.

WWD: How big is his collection?
Jen: He’s more into trading and making money.

WWD: What do you think of that?
Jen: I like it. A lot of people do it, though. It’s not like he’s an entrepreneur, he’s just copying what everybody else is doing.

WWD: Did you just buy these?
Beatrice: No I brought those.

WWD: Is this your first time here?
Beatrice: In New York, yeah.

WWD: And first time at Sneaker Con?
Beatrice: No.

WWD: Where else did you go?
Beatrice: We went to Vegas, Toronto.

WWD: Are you and your grandson looking to buy today?
Harriet: We’ll buy. I will buy for him.

WWD: That’s nice of you.
Harriet: He’s a big collector.

WWD: What do you think of this event?
Harriet: I’ve never been. My grandson has. It’s mind-boggling.

WWD: Are you looking for a particular sneaker?
John: Nah. I like everything.

WWD: Do you have favorite releases from 2017?
John: The Yebras. The yellow Yeezys.

WWD: Did you get them?
John: No. But I’d be in the market for them.

WWD: What’s your favorite purchase of 2017?
John: I bought a pair of the chocolate 750s. I got them on eBay through my lovely grandmother over there.