Socks on the Rise for Fall

NEW YORK — The Sixties, from Wilma Flintstone hair to silver go-go boots and micro miniskirts, are set for a rerun next fall — and that’s keeping legwear vendors on their toes. After all, who really wants to brave the cold with bare... 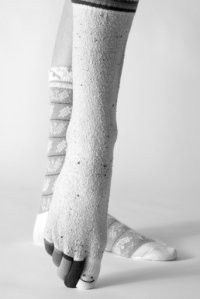 NEW YORK — The Sixties, from Wilma Flintstone hair to silver go-go boots and micro miniskirts, are set for a rerun next fall — and that’s keeping legwear vendors on their toes. After all, who really wants to brave the cold with bare legs and sandals when miniskirts and boots are de rigueur?

This story first appeared in the March 3, 2003 issue of WWD. Subscribe Today.

To that end, many firms are stepping up their assortment of knee-highs, novelty fashion socks and textured tights for this week’s fall legwear market.

Fall accounts for about 70 percent of the overall legwear sector sales of $3 billion.

“Women are wearing socks not just as a fashion statement, but also as a day-in, day-out part of their wardrobe,” Lipson said. “Fashion legwear is definitely happening.”

Among the key legwear trends being shown for fall are:

Knee-highs in novelty prints and yarns.

“Stripes are very important for fall,” said Tony Taylor, creative director at Look From London. “The whole Sixties influence will carry over in darker colors and stripes are part of the whole Mod scene.”

Donna Waxman, U.S. agent for Fogal of Switzerland, said she expects a return to heavier textures.

“Furs are coming back on the runway with so much strength,” she noted. “So for fall, we are looking to do a lot of heavier looks as far as crochet styles.”

Royce Hosiery Mills, which manufactures the licensed Nine West and Dockers legwear lines, is homing in on over-the-knee socks for fall, which will be available at Nine West at three for $15.

“A major fashion statement can be made in that category, with new heavyweight textures as well as patterns,” said Pat McNellis, president of women’s brands.

In addition, the company will offer luxury socks in angora and chenille, and luxury wool anklets and knee socks for $8 a pair.

“It is extremely important to focus the price points within each classification so that a stronger story can be told at retail,” said McNellis. “It makes it easier for the customer to shop.”

The Hot Sox Co. which manufactures the Hot Sox and Ralph Lauren lines, will be launching a new pricing strategy by splitting its Hot Sox offering into black and silver labels.

The silver label will be available at retail at three for $12 for basics, and three for $15 for novelty socks, from anklets and knee-highs to tubes and footliners. The black label will offer single pairs at $7.50 to $25, and feature handknitted socks and boot toppers, with embroidery and appliqué, as well as luxury fibers such as mohair, angora and cashmere.

“We hadn’t really addressed the ‘three-for’ pricing strategy, which is so prevalent in the marketplace today,” said Gary Wolkowitz, president.

As for trends, Wolkowitz pointed to vintage looks with geometric prints and florals in colors like brown, sky blue and peach. In addition, Hot Sox will present a group of socks that appear dissembled and stitched back together.

“It’s all about these unexpected combinations that would not work together but blend beautifully,” said Wolkowitz.

ETC, meanwhile, will be presenting colorblocks, dots and dashes and fleur-de-lis patterns for fall.

“There’s some open-to-buy, but it’s mostly for immediates,” said Robert Sussman, president. “Stores are going to look at fall, but they’re still buying spring and looking for quick deliveries.”

“This is the big fall push for us, and we are also showing Christmas and Halloween,” she said. “Halloween has become a more important season. It’s a growing part of the business for us. Many people love Halloween socks.”

Reese predicts fall bookings will be strong, since legwear has been a solid performer in recent months.

“Winter is still fresh in everyone’s mind,” she said. “Wet feet and all the snow has been good for business. People layer socks over tights. Also, boots will be popular again.”

Ozone Design, meanwhile, is focusing on over-the-knee silhouettes in such luxury fibers as angora with stripes, florals and Peruvian-inspired folkloric designs.

“The novelty for me is knee-highs and over-the-knees,” said Laurie Mallet, president and chief executive officer of Ozone Design. “The whole idea is people are going to work in boots and short skirts, and the socks have to go with this look.”

“It’s a lot about comfort and feeling good,” said Lipson at American Essentials. “It’s about that special hand, which can be achieved with beautiful microfibers…and, of course, anything in the category of luxe, such as cashmere-angora blends.”

For its licensed Lulu Guinness collection, patterns range from the quirky designer’s signature crests to little dog embroideries and Tyrolean sweater influences. For Lucky Brand, the company is offering toe socks with each toe in a different color, topped off by a smiley face for the big toe, alongside angora socks with snowflake motifs and signs for peace, love and happiness.

“With everything going on in the world, we’re making a fashion and a political statement,” Lipson said. “If you can do that, why not?

“There has to be a reason for the consumer to buy it. Space is tight today and our feeling is that with the novelty aspect of the business, the focus is to achieve as high a sell-through rate as possible.”

The CK Calvin Klein line is venturing into trouser socks for the first time to complement the existing CK sock business. There will be a total of 10 styles, including basic nylon socks and Tactel looks. CK trouser socks will wholesale for $3.60 a unit.

For fall, American Essentials increased its fashion assortment by 50 percent over last year, to now account for about 40 percent of total sales. The company is also stepping up its assortment of over-the-knees and knee-highs, which will represent 25 percent of the business this market.

“Our feeling is the timing is right,” said Lipson. “The consumer is looking for fashion, for a new accessory.”

This market, Etienne Aigner is presenting its foray into legwear with a collection of socks and select pantyhose. The line was manufactured in a licensing deal with Hickory, N.C.-based Paul Lavitt Mills Inc.

“Socks are a natural thing, since one of our strongest businesses still is footwear,” said Wendy Hessen, vice president of licensing and marketing at the Aigner Group. “It’s been long overdue, and while we are certainly realistic about the challenges in the legwear market, I think we have something fun to offer and a name that consumers are familiar with.”

Aigner’s hosiery collection features various textures, including woven looks, graphic floral patterns, chunky argyles and some sweater-inspired styles with a roll top. Wholesale prices range from $2.25 to $3 for socks, and roughly $2.50 to $4 for hosiery.

The Etienne Aigner legwear collection targets a distribution similar to its handbags and shoes, which are sold at department stores such as Macy’s and Lord & Taylor. First-year wholesale sales are projected at about $750,000.