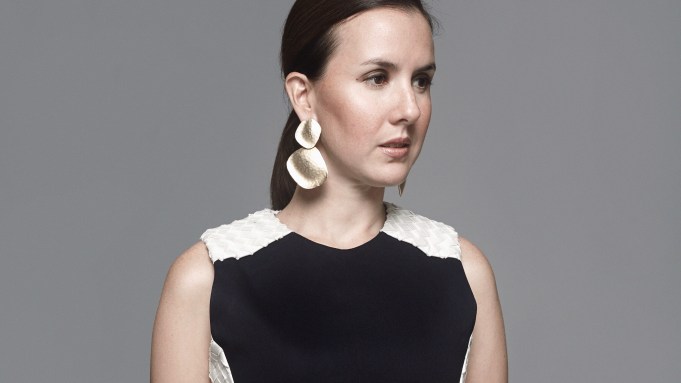 HONG KONG — Filipino fashion on the whole may still be under the radar, but at least one Manila designer is out to change that. Sofia Borromeo, who founded women’s wear label Sofie B, is intent on forging a name not just for herself, but for her country, too.

Raised in the Philippines until the age of 17, Borromeo ventured to the U.S. to complete two degrees at Savannah College of Art and Design — learning fashion design and luxury brand management. Cutting her teeth at brands including Natori, Thakoon and Yigal Azrouël, she went on to join SM Group, the Philippines’ largest retail firm as a fashion buyer.

But after three years of helping them shape their women’s wear business, she had tired of the corporate life. In August of 2015, she set up her own brand.

“I realized the artist in me needed to come out,” Borromeo said. “Being a fashion buyer was taking me too far away from the creative side, so I launched my own ready-to-wear label.”

“What’s trending in the Philippines is really ethnic designs and we didn’t want to go in that direction,” she said. “We tried to fuse our very tailored and structured designs that are very contemporary with touches of Asian and Philippine design elements for global appreciation.”

“We’re trying to get the Filipino culture out there,” she continued. “Nothing ethnic, but just to be able to say there’s a Filipino designer that exists on an international level.”
https://www.instagram.com/p/BSI5lcugc7N/?taken-by=sofie.b_

In a way, fashion runs in the family. Thakoon’s chief executive officer Maria Borromeo is her aunt. Beyond that, Borromeo’s family is full of distinguished figures — her mother is a Prieto, a prominent Filipino family known for launching horse racing in the country as well as their F&B empire, while her father’s side runs a large shipping conglomerate. Borromeo’s husband, Carlos Alvarez, is also well-known on the society circuit, hailing from a political family and is poised to run for office soon.

Her surname also draws a lot of attention thanks to the aristocratic Borromeo clan in Italy.

“A lot of people ask me that, they confuse me to be part Italian,” she said. “The Italian Borromeo family has gotten in touch with my grandparents and great grandparents trying to find the link to see how we are related, but I’m really not sure if we are.”

Since the start of this year, the brand has begun selling in Hong Kong as well as the Philippines. Borromeo hopes to eventually expand to Singapore, Malaysia and Mainland China, though growing a business has been full of challenges.

For instance, the Sofie B woman turned out to be much older than she thought, due to the still price-sensitive consumer in the Philippines.

“It’s been a year-and-a-half now and as of today, our customers are really the 40- to 60-year-olds,” Borromeo said. “I predicted that our initial clients that would be most attracted to our aesthetic would be around my age, and at that time I was 28 years old and I’m 30 now. I thought it would be women in their 20s but not at all.”

“In the Philippines, we’re considered contemporary price segment around $150 to $400 and that’s considered a lot for the Filipino, but when we tried selling in Hong Kong, everybody was very shocked at our prices and found them quite reasonable.”