Soft-edged Streetwear, Women, Zombies: London Men’s Week Has It All

Trends galore surfaced in the most extraordinary of venues, with London men's designers using more women than ever, softening up streetwear and working a rainbow of Seventies shades and sugary pastels into their lineups.

By Samantha Conti and Natalie Theodosi on June 9, 2019
View Slideshow 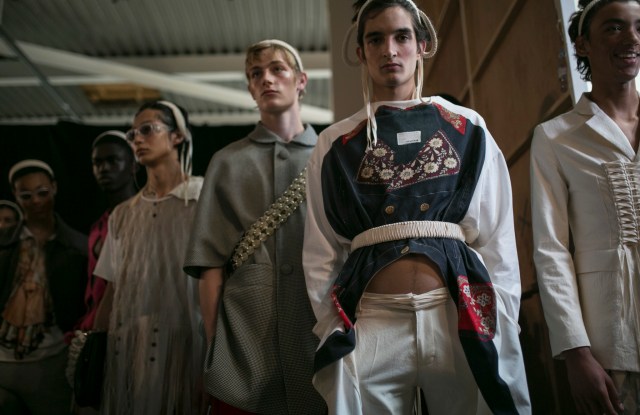 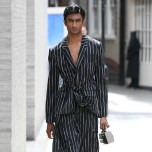 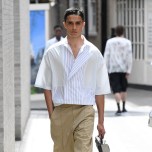 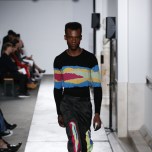 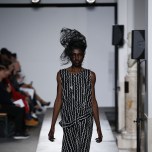 LONDON — A lot of high-profile names fell off the London men’s calendar for spring 2020, and what a boon that was for the smaller labels that basked in all the extra attention and took advantage of the shorter, less frenetic schedule to pack guests into their shows.

Trends galore surfaced against the most extraordinary of backdrops, including the British Library, the medieval Charterhouse in Smithfield, and the garden of Haberdashers’ Hall for Edward Crutchley, all of them in the east, or northeast, part of town, near the official British Fashion Council venue at The Truman Brewery on Brick Lane.

Designers also made efforts to reconcile their creative impulses with commercial demands, push into new territory, polish their offers and make a statement with their collections.

London may still have a lot of raw, nutty stuff rolling down the runway — see Stephen Jones’ spherical concoctions for JordanLuca, the questionable headgear at Münn and the zombie styling at Charles Jeffrey Loverboy, Art School and John Lawrence Sullivan — but many of these collections were shop-floor ready.

Among the major trends that surfaced was designers showing women’s wear, which makes commercial and aesthetic sense in a world where the boundaries between the genders are getting ever blurrier.

Stefan Cooke designers Stefan Cooke and Jake Burt — who made their solo debut after graduating from the Fashion East showcase last January — dressed their men and women in jackets with corset details at the front, sheer or cutout argyle tops, and flowery prints and bows. Models carried vintage handbags with handles that the designers had reworked for a new, younger customer.

Per Götesson telegraphed a gentle masculinity, open to romance and sensitivity, with body-hugging balloon-sleeve tops, ruched jersey dresses for men and crafty statement earrings. His clothes had an undone feel — think raw edges, strands of contrasting fabric messily sewn onto the shoulders of blazers or black-and-white pictures pinned onto T-shirts.

Some London designers took a nostalgic turn, looking back to the Seventies and Eighties with generously proportioned suits, billowy shirts and offbeat color palettes that channeled the home interiors of the period.

Patrick Grant of E. Tautz looked to the Seventies’ languid shapes and questionable wallpaper and upholstery patterns, and closed his show with Barry Manilow’s 1974 hit “Mandy.” Punk, too, punched through many a collection, including Charles Jeffrey Loverboy and John Lawrence Sullivan.

London designers are rapidly moving away from street, a trend they helped to pioneer, and are softening their tracksuits, shorts, sneakers and hoodies with lots of pastels, abstract patterns and designs, soft edges and whimsy to create sportswear that’s less about sweat, and more sweet.

The best examples came from Kiko Kostadinov, whose Kentucky Derby-inspired collection was bright, shiny and retro-futuristic, while Liam Hodges put an arty spin on rugby shirts, giving them patterned, rather than striped sleeves, cutting holes in military trousers and adding flashes of colored fabric.

Designers have also been turning their attention back to tailoring, offering a new and more relaxed take on the traditional suit.

At Iceberg, James Long set out to fuse Italian and British sensibilities with sporty, neon suits; Edward Crutchley offered his own take on tailoring with sorbet hues or bourgeois florals; Arashi Yanagawa added a tougher edge by cutting whole panels off the backs of blazers, or adding extra-large shoulder pads at John Lawrence Sullivan; while Lou Dalton, who’s been going back to basics as of late, offered laid-back, short suits.

Qasimi, another promising up-and-comer to emerge from London, toned down the streetwear portion of his lineup in favor of loose suits in neutral hues. He layered them with Ts and breezy shirts with the aim of offering something airy, and neutral, as an antidote to the political unrest in the Middle East, near his home in the United Arab Emirates.

Designers have also been embracing handmade, crafty and artistic techniques, doing the work themselves or collaborating with friends and other talents.

Hodges worked with his pal, the artist Alfie Kungu, on colorful, abstract patterns that spilled onto oversize grandpa cardigans and baggy trousers, or geometric colorblocks splashed on military jackets.