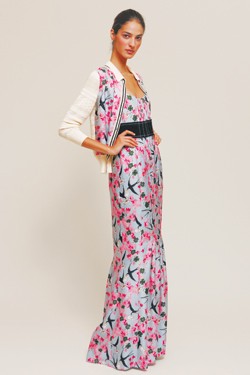 At Bill Blass, designer Michael Vollbracht said he was inspired by his early childhood spent in tropical Puerto Rico. This translated into breezy embroideries and eyelet, but he also showed plenty of ladylike tailoring.

Pucci’s Matthew Williamson went archival all the way in fluid little silk dresses and cute beach cover-ups, most of which he worked in the house’s graphic prints.

For his first resort collection, Giambattista Valli played to the modern notion of takeaway with easy knits, bowed dresses and sexy slim skirts. Meanwhile, at Temperley London, Alice Temperley focused on florals and nature motifs, many of which she showed on little embroidered tops and dresses.