All about "energetic and being positive," Miuccia Prada threw a star-studded party Saturday night in Paris at the Hôtel de la Païva.

By Miles Socha and Jennifer Weil on July 4, 2016
View Slideshow 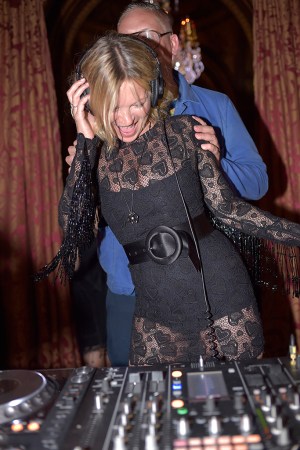 Miuccia Prada returned to her nightclub concept for her Miu Miu resort collection, hosting a sprawling party at an opulent mansion on the Champs-Élysées, the Hôtel de la Païva, famed for its yellow onyx staircase.

Prada picked that color for her party outfit: a satin Miu Miu parka with Velcro fasteners. She waved off questions about her colorful, hyper-embellished collection, returning to a favorite word: “fun!” Then she capitulated and offered: “energetic and positive. That’s what we need in these times.”

She displayed the clothes on mannequins — some propped on tables, other sprawled on the floor, which gave guests time to drink in all the dizzying details and candy colors: yellow plumes spewing out of the vamp of crystal pumps; swirling sequin embroideries on gleaming coats in fuchsia or lapis; jewels scattered on the bodice of long T-shirt dresses in loud curtain prints. While dress shapes were reminiscent of pre-war eras, the large-scale and vaguely psychedelic prints tempered the retro feeling. Giant rave pants, metallic leather cheerleader skirts, stacked plastic bangles, platform ballerinas and spangled satin bucket hats all broadcast the same youthful zing.

While overcharged and eccentric, the looks lost some of their zaniness when worn by models mingling with guests at the busy party, which included Marie-Ange Casta.

“I have a movie coming up in January. It’s an Édouard Bear [film], named ‘Ouvert la nuit,’” she said.

Miu Miu regular Marc Jacobs said he’s hard at work on his spring collection, focusing on fabrics with his team in Paris right now, plus “working on the accessories and stuff like that.”

No summer holidays are in the cards for the designer.

“We’ve been having a ‘staycation’ at the Plaza Athénée, which has been great,” he joked and added, in reference to the ongoing poor weather in Paris: “We’ve been wearing winter clothes and parading around our suite.”

SoKo has a lot on her plate. She’s been busy doing promo for “The Dancer” and “The Stopover,” two movies opening in September. The singer-actress is also incubating her third album. “That’s meant to come out when it’s ready,” she said. “It’s getting all the ingredients together.”

Singer Petite Meller is focused on her new album, “Lil Empire,” due out Sept. 8 on Island Records. She also has two new videos coming up, one for a song called “The Flute,” which was why she sported a big wooden flute thrown over her shoulder, that was just shot in Senegal. The other, up next, will be lensed in Mongolia.

In one of the rear courtyards, there was a large TV broadcasting the France-Iceland quarterfinals of the UEFA Euro 2016 soccer competition. Among those glued to the screen were Maurizio Cattelan and actress Roxane Mesquida.

She has a new movie breaking Wednesday. “I play a singer, who is a little bit intense and crazy, extremely jealous and ready to do anything to have her man back. It’s called ‘Despite the Night,’ and directed by Philippe Grandrieux,” she said.

Mesquida is also gearing up to shoot an independent American movie in Paris in about a month. Its name is “Thirst Street,” and Nathan Silver is to direct it.

“I actually play a singer again,” she said. “I didn’t sing until the [first] movie; I had to learn the songs in order to sing. And so now I’m like singing again.”

“I felt like it was really showing my soul, and I thought it was more difficult than being naked in a movie, for example,” continued Mesquida. “Singing is like very intimate.”

Elsewhere, Emma Greenwell was playing backgammon. She will be filming the second season of the TV series “The Path” in New York until the end of October. Sitting on the floor chatting next to her were Stacy Martin and Dianna Agron.

“I’ve just finished a film, called ‘3 Way Junction,’” said Martin, adding that shooting for the movie directed by Juergen Bollmeyer took place in South Africa. “And I am about to start my new film in a few weeks with Michel Hazanavicius about [Jean-Luc] Godard’s relationship with his second wife Anne Wiazemsky.” (It’s based on the books that Wiazemsky wrote and how their relationship disintegrated after the filming of “La Chinoise.”)

Agron has two films in post-production now. “I have a movie where I am looking for my brother on a mountaintop, it’s a survival movie, and then I have a movie that I shot about nuns in the Sixties,” she explained, adding this was her fourth time in Paris in six months.

At 10:30 p.m. a big crowd gathered in a large salon, where Kate Moss deejayed for an hour straight. The crowd went wild – not to mention snap-happy – as they danced to songs including “Love Don’t Live Here Anymore” and “No More Tears.” Other VIP attendees included Giles Deacon, Amber Valletta, Gabriel-Kane Day-Lewis and Aymeline Valade.