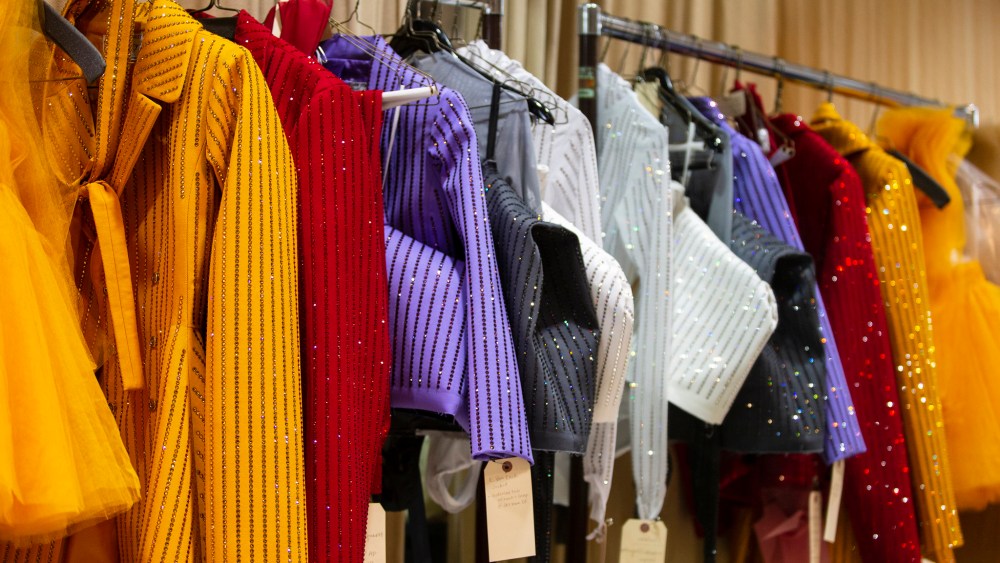 The dance world continues its return, and the New York City Ballet this Wednesday has planned a program angled toward a new generation of theatergoers.

Audience members who see the curtains part at the company’s 10th annual Fall Fashion Gala this week will take in three new works with costumes by globally recognized fashion designers. The star power behind one ballet in particular has been touted as one of New York City’s must-see cultural moments this fall, and multiple performances scheduled throughout the season have already sold out.

“Play Time,” with choreography by rising talent Gianna Reisen, costumes by Alejandro Gómez Palomo of Palomo Spain, and an original score by Solange Knowles — her first for a ballet company — will feature a cast of 10 dancers dressed head-to-toe in pinstripes made up of more than 800,000 Swarovski crystals.

“Alejandro came to me with these incredible ideas and Solange had this really powerful, crazy music and I said, ‘OK, it’s my job to reel that all in and make something cohesive,’ so in that sense it’s a lot of pressure. They have done what they need to do, so it’s on me to create something that makes sense,” Reisen said on a recent afternoon at City Ballet’s costume shop during fittings for Palomo’s designs. A former student of City Ballet’s affiliated School of American Ballet, Reisen, 23, has danced professionally with Benjamin Millepied’s L.A. Dance Project and a national company in Dresden, Germany, but recently stepped back from dance to focus on her choreography.

Despite her young age, she is a Fashion Gala veteran; Reisen created her first piece for the company in 2017 at age 18, featuring costumes by Virgil Abloh. In 2018, she reprised her participation with a new work dressed by Alberta Ferretti.

She returns to the company for the first time post-pandemic with newfound confidence. “I’m starting to develop my own vocabulary, my own movement. I’m starting to feel more comfortable in commanding. It’s not easier, but [I] feel like I’m more experienced and I have more to say now,” she said.

Reisen’s latest effort looks to bring a new brand of modernity to ballet — which is often stuck in rarified, old-world codes — and Knowles’ music aims to be a large part of that equation.

Knowles’ 16-minute score, when heard in bits by WWD, is largely rooted in cool, experimental jazz with pacing and interludes that hark back to classical ballet. Its rich, layered notes compliment Reisen’s fizzy movements, which tend to burst onto the stage and sustain an untold level of energy that plays to the speed of her classic Balanchine training.

“[Solange and I] connected on our love for jazz,” Reisen said her initial meetings with Knowles. “She decided to take a jazzy element and kind of twist it and make something new that nobody has ever heard. I feel like there’s nothing like it made before, it’s very unique.”

Knowles decided against incorporating vocals into the piece, but will have two key instrumental collaborators — on bass and drums — play her score alongside the New York City Ballet orchestra.

“After experimenting with new musical sounds and compositions the past few years, I’m really excited to premier this new work alongside Gianna’s vision,” Knowles told WWD in a statement. “The piece really expresses a journey of power and vulnerability, two conversations that I really try to center in all of my practices. Dance has been such an important beacon of expression for me, and to work with the New York City Ballet on this feels like a beautiful home for this new work.”

With Knowles’ score completed this summer, Reisen also looked to Palomo as a key collaborator when considering larger movement motifs. Palomo, based in Madrid, is best known for his gender-nonconforming approach to menswear. Early in his label’s history, the designer made a splash with pastel pink collections inspired by rococo extravagance. More recently, Palomo has gone a more ironic route, exploring the boundaries of bad-taste tailoring and exaggerated proportions.

Instead of tackling a tutu, he decided that his recent fascinations still left enough material to explore on the City Ballet stage.

“I didn’t want to do the expected thing. When I spoke with Gianna and Solange, we talked about my last collection that was much more tailored and square. I was trying to do a new idea of camp men, so I translated that into the world of ballet,” Palomo said.

He’s concocted a little monochromatic zoot suit for each dancer with festooning shorts, sometimes covered by a trenchcoat or corset. And of course, they are all laden in sparkly rhinestones — even down to the dancers’ tights — resulting in uncharacteristically heavy costumes. Palomo got the idea from his recent work with Eurovision contestants, whom he also bedazzled in full Swarovski glow.

The rhinestones were all special-ordered and color-matched to fit Palomo’s vibrant palette. But luckily for the City Ballet costume shop, they did not require each stone to be individually set.

“The crystals come in sheets that we cut into shapes to match our patterns and then they’re heat-set,” explained NYCB costume director Marc Happel, who is the fashion gala’s ringleader of sorts. Each year he liaises with participating designers to facilitate their visions, which are fully constructed at the company’s in-house costume shop. “It’s amazing how quickly 800,000 crystals came in the door,” he joked.

The crystals are now onto their next big challenge — City Ballet’s lighting department, which is experimenting with different techniques that will best highlight all the glitz without blinding its audience.

And that sparkle will be unrelenting throughout Play Time’s full run. Reisen decided to choreograph the entire ballet without partnering in order to preserve the crystals’ brilliance — instead of having them fall afoul to sweaty fingerprints.

“We didn’t know what the outcome would be so Marc advised that we avoid having the dancers rub against each other because we didn’t want the crystals falling off onstage. My challenge was making a ballet with no partnering at all,” Reisen said.

But to her, it was worth it: “I think, having done this particular event in the past, I really wanted to embrace it more than I have and take risks and push it further. I know some critics think that the costumes can be distracting or overpower the piece, but this is about embracing costumes for dance — you might as well go all the way,” she said.

In addition to Palomo’s costumes, City Ballet has also commissioned two other designers to create looks this year. Raf Simons had created a minimalistic suit for Justin Peck’s “Solo,” which will be staged live for the first time. And Giles Deacon and Kyle Abraham, now close collaborators who met at City Ballet, have worked together on costumes for Abraham’s new ballet — a fleet of black and red wine-colored perky tutu’s and digitally printed leotards.