It's been two years since Jared Gold surprised the fashion community here by packing up his kooky Victorian carousel world and moving to Salt Lake City. 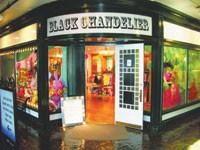 Gold’s presentations for both his signature line and the lower-priced Black Chandelier in downtown back alleys or cavernous lofts were like stepping into Alice’s looking glass, with his cast of freaky friends and cabaret entertainment.

Gold, now 33, made broaches of Madagascar cockroaches. And punk princesses who wanted to look like cancan dancers on absinthe couldn’t get enough.

But Gold had enough of the big city roller-coaster ride and self-financing. In late 2003, a Utah-based friend who is a securities attorney convinced him to relocate to help him take the company public. Dark Dynamite Inc. is listed over-the-counter.

“The decision to go public was really to finally get this sucker off the ground,” Gold said Tuesday by phone as he readied to travel to Los Angeles the following day. He will show Saturday night at the Twin Springs Building downtown. “Going through different investors in L.A. was fine and all. But it got to this point where they were always interfering with the vision of the line,” he said.

“Besides, I need to live a more quiet life,” said Gold, an Idaho native who moved here a decade ago to attend Otis College of Art and Design. “Salt Lake, with its beautiful scenery and pace, allows that.”

Not that the city has tempered Gold’s sensibilities. This summer, he participated in the Goth underground Dark Arts Festival by creating and hosting the “Horrible Heidi and Her Demolition Rollerderby” game-show event. And his band, the Misfit Toys, performed covers of Siouxsie and the Banshees, Bauhaus and The Cure on a multitude of quirky instruments — a toy piano, kazoo, xylophone and theremin.

The new chief executive officer and head designer of Dark Dynamite, Gold heads a team of 10 who work out of a four-story “white gingerbread” Victorian building. Besides the signature collection, there is the the overly embellished T-shirt and denim-driven Black Chandelier label; Black Chandelier Home, with linens, candles, stationery and lighting; the children’s Pink Chandelier line, and the new skateboard and active collection called Lemon.

Gold’s goal is “mass personalization,” as in good design at great prices. Jared Gold wholesales from $35 for a heavily patterned T-shirt to $400 for a highly ornamented corduroy coat. Black Chandelier is priced from $6 scarves to $50 jackets.

Also new under the public structuring was Gold’s decision to sell exclusively through his own stores. A Black Chandelier shop opened in Trolley Square in Salt Lake City last November, followed by Seattle last March. A third opens in Los Angeles’ Echo Park neighborhood next month. All are about 1,000 square feet.

Plenty more are slated to open, Gold said. Still, the company’s wholesale volume is modest this year and is expected to reach $250,000.