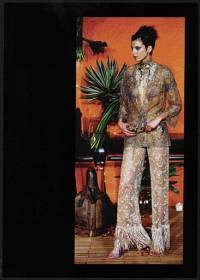 NEW YORK — Caudry, France — fashion capital? Hardly. Although when it comes to fine lace, it’s what Paris is to haute couture. A sleepy town back in the mid-19th century, it now boasts the leading producers of Leavers lace worldwide. It was Solstiss that put Caudry on the map.

Branded in 1974, the lace manufacturer is actually an amalgam of four former competitors. They came together after fashion’s Courrèges moment in the mid-Sixties, when the demand for lace was at an all-time low. The mill owners decided that, united, they stood a better chance and joined forces to form one company. Although the factories never merged, their marketing, sales and distribution efforts were unified. “It was a way to evolve at the time,” says Francois Damide, the president of Solstiss Inc., the U.S. subsidiary of Solstiss and Bucol, a silk mill in Lyon. “If they hadn’t done it, they would have never survived, because there were too many lace mills and not much demand for the product at the time.”

Today, Solstiss is a $20-million business and accounts for 1/6 of the worldwide production of Leavers lace, according to the French Federation of Lace and Embroideries — lace created, that is, by mills that specifically use Leavers looms, which arrived in France from England in the 1830s. When John Leavers invented his loom in 1813, it was capable of producing net, a revolution at the time. Combined with the use of jacquard-pattern controls from a jacquard loom, invented by Joseph Marie Jacquard earlier in the century, Leavers’ looms could create the types of intricate designs that had previously only been possible by hand. Now manufacturers could produce a yard of lace in just an hour, instead of a week. Thanks to a dramatic drop in price, it was also more accessible.

Mick Fouriscot, president of the French Federation of Lace and Embroideries, says Solstiss’ preeminence in the industry exists because the company encompasses four sensibilities. “This allows them to find the right match for each one of their customers,” she says.

The mills’ specialties are indeed diverse. Beauvillain’s factory is known for its artful use of metallic fibers. Belot and Ledieu’s mills specialize in delicate chantilly lace — Ledieu’s is more classic, while Belot’s is more moderate in price. Machu’s mill, meanwhile, creates the more basic designs.

The list of customers these mills serve reads like a who’s who of fashion houses — from Oscar de la Renta and Bill Blass in the U.S. to Ungaro, Lacroix, Dior and Chanel abroad.

For Emanuel Ungaro — a client since the early Eighties for his ready-to-wear and couture lines — Solstiss’ lace can be inspiring. “It evokes emotions in my inner self. It moves me,” he says, adding, “It is omnipresent in everything I create.” Part of the lace’s appeal is that it “reveals the female body without ever being vulgar,” he explains.

Lars Nilsson, co-creative director at Bill Blass, has been using Solstiss lace since he started working in fashion 15 years ago. “I was interning at Chanel and used it there. I’ve used it at every place I’ve been since then,” he says. Now, at Blass, Solstiss accounts for about 80 percent of the lace that Nilsson and co-creative director Herve Pierre choose.

For Nilsson, it’s the firm’s flexibility and freshness that is most appealing. “Either in terms of design or technique, they do something completely new every time,” he says. “I can fit them into my collection each season.” The breadth of the designs that come out of the company is also important, he notes. “They have everything from the finest chantilly to a guipure. Lace, by its nature, is very classic, but by lacquering or reembroidering it, or by creating an unusual abstract design, Solstiss gives it a very modern sensibility.”

This sensibility has also allowed Solstiss to move beyond its haute couture and designer clientele. Lace is now everywhere, from Madison Avenue to your corner GAP. As part of this evolution, Solstiss created the BCD line.

Damide explains the line’s debut as another way for the firm to move forward. “It’s made in France on the same machines,” he says. “The only difference is that there are a limited number of designs to choose from — 100 compared to 3,000 at Solstiss.” The system, he adds, is set up for large quantities only, with a 500-yard minimum.

In addition to the bridge market, Solstiss was also interested in catering to the American made-to-order market. Enter the Embelliss line. Introduced just last year, it’s meant to be to the States what the Solstiss haute couture line is to Europe. While prices for the couture line range from $200 to $600 a yard, styles within the Embelliss line run from $100 to $350. “It’s lighter, younger, more moderately priced and it’s also less precious,” Damide says.

Geraldine Soussan, the creative director of the collection, takes traditional looks and updates them. Among them are a Tajima embroidery that is flocked and then printed; a chenille lace that’s tie-dyed and appliqued with pearls and sequins, and a handmade crochet lace, finished in plastisol, a plastic-like treatment. Embelliss customers are predominantly small made-to-order firms in Florida and stores selling yardage in California — “mostly frequented by movie studios,” according to Damide. In New York, designer Reem Acra uses the lace for her eveningwear line. Embelliss, which netted $1 million in its first year, is set to grow, Damide says. “It’s doing really well, especially at retail fabric stores.”

The key to the future for Solstiss, he believes, is creating a balance between tradition and new ideas. “The U.S. [designer market] has evolved so much since I started the office here,” Damide says. “As a result, I think people’s views about lace have changed, making it an important ingredient in any collection — as it has been in Europe for many, many years. This has allowed us enormous growth.”

The biggest challenge now, he concludes, is to continue that growth. “We represent a very specific niche and a very expensive product, but I still believe our business will remain strong.

“There will always be a place for Leavers lace in fashion, because it’s the finest lace available, and I think certain people appreciate its rich history and its high quality. And for many of these people, price has not and will probably never be an issue.”